Alright, friends. Ted Lasso has concluded its second series finale. I didn’t cry as much as I did the first time around in series 1, but just as much went down for our characters. Let’s get into it. 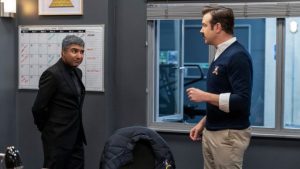 Nate has completed his transformation as the new prince a$$hole of the show, taking over for Jamie Tartt, who as we know underwent the opposite transformation. In my last review I was preoccupied with what Ted’s reaction would be, how he would handle it after his sessions with Sharon; turns out I should have been asking different questions, like what Nate’s real motivations for his malicious actions were. The basis for Nate’s betrayal of Ted, it turns out, were feelings of betrayal of his own. Feeling left behind, ignored and unseen after Ted plucked him from the obscure depths of kit man-ship and handed him his dream job, Nate could no longer understand where he fit in at Richmond, and decided to burn it to the ground instead. Figuratively speaking, of course. (Take notes, series 1 Rebecca).

I understand the feelings Nate was describing. Though selfish-seeming and vain, though ridiculous to hear spoken out loud, they are also very human, pieces of thoughts most of us don’t dare to admit we experience. And that’s where Ted Lasso has always excelled – showing us the parts of ourselves we don’t like, and validating us anyway. Still, this was an excruciating scene to sit through. I was furious with Ted for not defending himself further (though that’s very on par for him) and, obviously, even more furious with Nate, who at this point has vindictive tunnel vision when it comes to his boss and mentor. Nobody asked for a remake of Revenge of the Sith, thanks.

Nate has grown antagonistic toward practically every member of the Richmond squad by now, including Roy, in front of whom he insists he deserves as much anger as Jamie for making a move on Keeley. (Keeley also doesn’t need three men fighting over her to be an appealing character study all by herself, thank you very much.) The entitlement of his arguments was what really got to me; we can sit around and validate feelings all day, but the defining moments happen when we act on those feelings, or choose not to. Nate’s actions regarding his feelings of inadequacy consist of blame, sabotage, antagonistic comments and abuse of power – a textbook combination guide on how to ruin a healthy relationship. No wonder at the end of it all he follows in the footsteps of the Premier League’s biggest man-child: Rupert, Rebecca’s ex-husband, who has recently bought West Ham United and offered Nate a job on the coaching staff. We can only hope we’ll see enough vengeance wins for Richmond in series 3 than we did goals in the first two series combined.

My girl Keeley had a big episode as well, with an opportunity arising to start her own business. Tearfully bidding goodbye to Rebecca, who gives her the parting advice to “hire your best friend,” Keeley is off to begin an exciting new chapter of her life with her forever-supportive boyfriend by her side. Speaking of validating feelings, Roy’s when Keeley’s article is run without any pictures of him involved are some of the most relatable of the episode. Pride in his girlfriend, shame when that conflicts with hurt at her success without him by her side – sign me up for the drama, please.

Regardless of where this development leaves Roy and Keeley’s relationship in series 3 – and it seems ambiguous at best, given her refusal to take him up on his offer of the world’s greatest pre-paid vacation – Keeley’s storyline is about to get 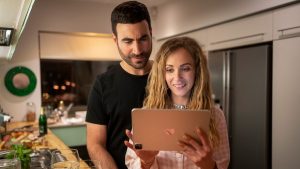 a lot more complex. And I’m all for it – this is a well-deserved development for her, and I think a much-needed confidence boost. Keeley has always been a confident character physically, but Juno Temple plays her mental and emotional insecurities subtly, just subtly enough to make her near childlike glee for her new opportunity heartbreaking for those of us who have accepted a new job and had it not quite live up to expectations. Just please, for the love of God, don’t send her back to Jamie.

I’m honestly not sure how to feel about this one. I honestly felt like, given the number of colonialism jokes the show has made over the course of both seasons, there was a higher chance he would leave than stay. In another touching scene involving Rebecca, Sam maturely states that though he has feelings for her, it’s a decision he’s making because it’s what’s right for him right now and nobody else. In my book, that’s the only way to go about making such a potentially massive life shift. Proud of you, Sam. We gotta give Rebecca time between scenes to go out and buy more Kleenex, though, because she was hit with more than a few emotional tidal waves this week.

I felt like Ted experienced this episode as if he were watching it next to me, a mere bystander as the events of his life unfolded. He took the fallout of Nate’s betrayal remarkably well given his struggle with embracing mental health as an acceptable topic to be discussed in *manly* settings like ✨sports locker rooms✨ and pubs. This is a nice if subtle character development for him, the result of his therapy sessions evident but not a sudden or dramatic shift in character, accurately reflecting the result of therapy in real life and not society’s stereotype of it. The poor man more or less sits back and does his job regardless of the judgments being made about him, most of which stand in support of his panic attack. Sucks for Nate, who had been hoping for the opposite reaction from Richmond’s public. Even the one callout on his personality that had the ability to deeply hurt him, Ted seemed to shrug off and was this time able to focus on the match, ultimately leading Richmond back to the Premier League.  And Sharon’s sessions have obviously paid off for Dani Rojas as well, seeing as he is this time able to score a game-tying penalty kick without the horrifying memory of the late dog that started off the series. Football is, once again, life. Good for both of them. 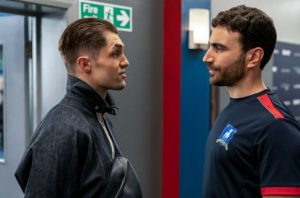 Jamie, meanwhile, a man who started off the show as the most annoying footballer since Cristiano Ronaldo (yeah, I said it) has transformed into a man that apologizes to his named enemy for confessing his feelings to Keeley, a man who gives up the high-stakes PK to a teammate selflessly to restore his confidence, a man that is, finally, likable. It took all season, but I’m convinced his growth is honest. Even the supporting characters have undergone some sort of positive change: Trent Crimm, for example (my favorite supporting character by far) has willingly fired himself for giving up a source (which I more or less predicted in my last article, did I not?) and begun to look for writing opportunities outside of journalism. You’ll never convince me that the best joke of this episode, maybe even the entire series, was not, “You know what that makes me? Trent Crimm. Independent.” 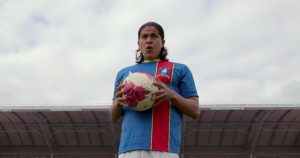 It really is only Nate left hanging on the precipice of good and evil, not to be dramatic or anything. Clearly he’s made his choice, which is disappointing, having watched him lose not only his honest passion for the sport but the comedy he brought to the show, which has been lost for quite some time. Nick Mohammed was one of the most underrated comic forces on the show in series one, in my humble opinion, and losing that contributed to the lack of je ne sais pas many fans felt were missing this time around.

Still, a solid end to a solid series arc, Beard After Hours aside. Thanks for sticking with me through it all.