Watercooler Reviews | “Ted Lasso” Round Table: Season 2, Episodes 9 and 10: “Beard After Hours” and “No Weddings and a Funeral”

Usually when a show’s narrative takes a mini vacation from the main one, one or two things are being signaled: a side character is about to get a backstory, or sh*t is about to go down for the rest of the season. I wouldn’t call what Brendan Hunt’s oddball Coach Beard got in Beard After Hours a backstory, per se, but I do believe we’re in for a wild ride in episode 10 and beyond based on this Beard-centric hour’s placement in the series lineup. 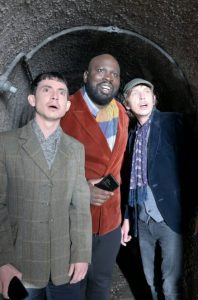 As Beard told Ted at the end of the jam-packed Man City episode, he wanted to take his own route home after Richmond’s embarrassing loss at Wembley Stadium. Fair enough, I suppose. It’s a choice he regrets almost instantly, however, as he’s forced over the course of the night to relive his coaching failure and spirals into a cycle of self-hatred, rethinking most of his life choices. His first stop after the match is The Crown & Anchor, where he is blamed for the match by Mae – who is far and away one of the best supporting actresses on the show – and takes surprising solace in the three biggest Richmond fans on Earth. Jeremy, Baz and Paul (whose names I confess I had to Google, taking them for granted onscreen as I do) had a nice little arc in this episode, culminating in a secret visit arranged by Beard to Nelson Road. Predictably, the trio lose their minds, and as we saw with Nate’s promotion from kit man to Coach in series 1, it was heartwarming to watch Ted Lasso yet again show fans who and what they are to their team of choice, which is certainly not nothing. 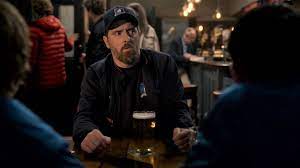 Before then, though, Beard and the fans go clubbing, which sets off an oddball series of events for our assistant coach that ultimately leads to his full realization of his love for Jane, a somewhat disappointing development. One daring game of pool, one chase from a would-be lover’s partner who could give Jason Momoa’s Khal Drogo a run for his money, and one street fight with Jamie’s drunken dad later, Beard finds himself turning to the church for comfort, based on the last text he received from Jane: a picture of a cross. That the church turns out to be a front for a nightclub that Jane is at isn’t out of character for an episode that is decidedly out of character already, so sure, why not, I’ll roll with it. As far as advancing the plot, this episode gave us nothing, unless Higgins is going to once again confront Beard about his problematic relationship. But it did give us Brendan Hunt working it with several hula hoops, which is fine. 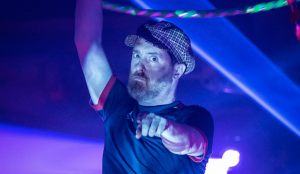 No Weddings and a Funeral

After Beard After Hours, which I would generously rate at a B+, Ted Lasso got back on track with its agenda of making me cry with each new installment. Thank goodness we were introduced to the concept of rom-communism earlier in the series, as the title of this episode is, of course, referencing one of the more popular romantic comedies of its age. The episodic arc follows the surprising death of Rebecca’s father, which leaves a good majority of the characters reeling for different reasons. For Rebecca, it’s less about grief and more about anger with her father for his unfaithfulness to her mother, than fury with her mother for continuing the relationship regardless of his infidelity. For Ted, it’s another panic attack, the topic bringing him back to the circumstances of the loss of his own father. For Keeley, Roy, and even Jamie, it’s about dealing with loss of all sorts, and the questions surrounding being the one lost and the one left behind.* 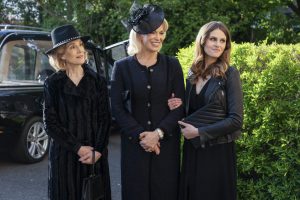 Rebecca’s relationship with her mother was played exceedingly well between the two actresses, Harriet Walter performing the perfect motherly contradiction of wanting the best for her child and coming off condescendingly (with the exception of her reaction to her daughter’s relationship with Sam Obisanya – can’t really blame any of them, honestly). Speaking of Sam, his relationship with Rebecca sadly seems like it’s already on the way to being collateral damage on Rebecca’s journey to becoming her best self. Which I am all for, but that it might be happening at Sam’s expense isn’t my favorite thing in the world.

Rebecca’s and Ted’s simultaneous rehashing of their childhood experiences was handled delicately, even as the subject matter is anything but delicate, making for very good television. Especially as the stories were concurrently told, though of course one has a very different ending. Ted, who finally tearfully confesses the story to his probably underpaid therapist, is a mess; barely able to bring himself to eventually attend the funeral at all. And as he truly opens up, we hear out loud what we’ve known all along: Ted’s motivation for the biscuits he brings to Rebecca, for Jamie’s return to Richmond, for everything he’s done for everyone since day one, is simply that he’s determined to never let anyone feel the way his father must have felt. I wanted to run straight back to both of my parents upon hearing one of Ted’s last confessions: “And I knew right then and there that I was never gonna let anybody get by me without understanding that they might be hurting inside, you know?”

Leave it to Ted to make us really hear a phrase that most of us are more familiar with as “The Golden Rule.” 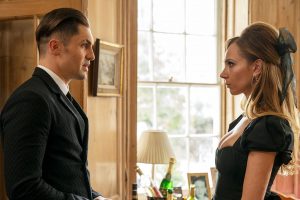 Meanwhile, Roy annoyed me for the first time since the show aired in the first place with his insensitivity about Keeley’s process for grasping death, which of course left room for Jamie to confess the love he’s apparently never lost for her, which you could’ve fooled me about. Thinking about loss has affected him as well, it seems, though I don’t think it will ultimately break up Keeley and Roy. Though irritating, it’s another honest look at things that happen to people in serious relationships that our general society doesn’t much like to widely acknowledge or discuss. 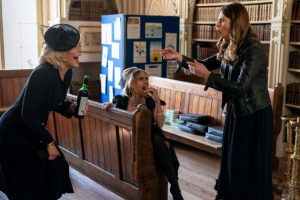 All in all, I’d give this episode a not-as-generous A where its predecessor failed to inspire its usual bucket of tears. It was worth it alone to see Sassy, Rebecca and Keeley sneak away at the world’s most inopportune moment to have the world’s most inappropriate funeral conversation: gossip about the much younger man she’s been shagging. The three of them, I swear, could be an all-women pop group. Their friendship is terrifically entertaining – Sassy only adds to the dynamic Keeley and Rebecca already enjoy, and seeing as she seems to be looking to rekindle her brief romance with Ted, there might be a lot more to gossip about soon. (Even if nobody decides to fat-shame a baby for the rest of the season.)

No Weddings and a Funeral did the job it was supposed to do – it got us back on track with the plot after Beard’s extremely odd night out and it circled back heavily on the theme of parents and children that had been hanging over us all season. But it still left a few unanswered questions. I have a feeling the finale of series 2 will be a doozy.

*Dani Rojas does steal the show a bit, though, with all his horror at having to wear non-cleats to the funeral. I just had to call that out.