Continuing the rom-com action from last week’s Love Actually surprise, Ted Lasso truly outdid itself with an episode-ending, tear-jerking sequence involving my man Roy Kent and his decision to return to Richmond… as Coach.

But a lot happened to get us to that point.

We open on our guy Coach Nate, who wants to reserve the window table at his parents’ favorite restaurant for their 35th anniversary. Being Nate, when he is told reservations for the window table are not allowed, he reverts to the scared kit man inside him and immediately accepts defeat. It was a strange opening for Ted Lasso, one that felt uncharacteristically clunky, but it did treat us to a small pundit showdown between Roy and George (Ted’s predecessor), which I felt made up for it.

Nate has an arc in this episode that leads to a nice bit of development for him, as he seeks the advice of Keeley and Rebecca on becoming a more assertive and confident person. Rebecca, taking him under her wing, shows him her technique for prepping herself to walk into a meeting room full of her all-male executives, prompting one of Keeley’s best lines to date: a good old fashioned “Holy shit, you’re amazing. Let’s invade France.” 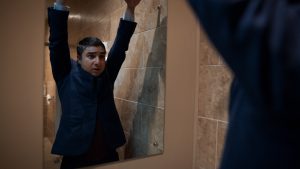 Nathan’s technique is a bit more subtle and obvious – the ol’ mirror pep talk trick – but it works and the window table is his. Huzzah, Nate!

Meanwhile, Isaac is struggling as Richmond’s new captain, acting more abrasively toward his teammates than anything else on and off the field. (Maybe Roy wasn’t the only one who needed to read A Wrinkle in Time?) As the team rewatch their latest match and Isaac singles out Yan Maas for a defensive blunder that cost Richmond a goal, Ted takes over and, as all the best coaches do, places his faith in the team’s ability to restore their record in communism.

Just kidding. We’re talking about rom-communism, which is entirely different.

He’s got a point: if Hugh Grant, Meg Ryan and the three Kates can go through “a few lighthearted struggles and still end up happy,” so can Richmond. “Believing in rom-communism,” says Ted, “is all about believing that everything’s gonna work out in the end.” It’s an optimistic view, but Ted has been nothing if not an optimist from the start, so, sure, I’ll buy that the league’s remaining matches will play out like the end of Notting Hill. Isaac, though, is not a believer. Of course, Sharon notices his agitation, and she brings it up to Ted immediately, who predictably calls in backup of his own rather than send Isaac to the person paid to be a sounding board for his innermost thoughts and struggles. Sharon also notices that Ted himself may need her help, and I could see him taking her up on it, perhaps in the season’s final moments as part of a big character arc, but that remains to be seen.

Luckily for Isaac, Ted does have a card left up his sleeve, and that card’s name is Roy Kent, Isaac’s predecessor as Captain. Roy takes him to the apartment complex he grew up in to remind him that football is a game that should at its heart be played for *gasp* fun. After something of a wake-up call and realization that he is not in fact the end all be all of football, Isaac finds his inner child and love of the game again, and finally becomes the team captain Richmond has needed. That’s not a journey we’ve seen a lot of thus far, and it felt a little out of left field – especially as it served as part of a larger arc for Roy. But as soon as I figured out what that arc was… 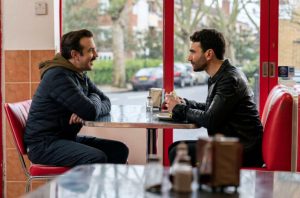 Ted, after the successful evening with Isaac, approaches Roy with the same proposition he dangled in front of his former football star at his favorite kebab shop (which was a bold, if risky, move on Ted’s part): to join Richmond’s coaching staff. And thus begins the rom-com parallel that takes us through the end of the episode. There’s the “No” from Roy, the “When you realize you want to spend the rest of your life coaching with somebody…” from Ted, and the “Hell no. Never,” from Roy. But when Roy realizes during his next pundit gig that he’s made a mistake, the episode that has held up rather dryly compared to its predecessors takes an exciting turn. We are suddenly in full fledged rom-communism mode, beginning with the clichéd nod and “I have to go” shared between Roy and his co-pundits. Sprinting as best he can with a bad knee, Roy makes use of a whole host of ridiculous methods to make it to the stadium, where the tickets Ted has been leaving for him all season finally come in handy. And, as he sets foot in slow motion back onto the pitch’s sidelines to thunderous applause and familiar chants of “He’s here! He’s there! He’s every-f*cking-where, Roy Kent, Roy Kent,” the rom-com concludes with Roy accepting Ted’s coaching offer: “You had me at Coach.” 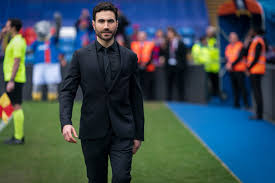 Is it me, or did Coach Beard have tears in his eyes there (or was I just half blind from my own?)?

Poor Nate, though – as Roy takes his rightful place as King Richmond, we see a forlorn look pass over him, probably erasing most of the confidence he’d just worked so hard for. I wonder if we’ll see that develop later on, hopefully with reference to one of my favorite scenes in season 1 involving Roy insisting he didn’t know Nate’s last name and immediately being tricked by Keeley into revealing that he did. I’d feel exactly the same way if I were Nate, or Coach Beard (or Ted, while we’re at it), and that all the crushing and disappointing emotions Nate the Great must be experiencing in that moment are conveyed with a single look is a testament to Nick Mohammed’s acting chops. Still, that last shot of the four coaches on the sidelines really got to me. God, I love this show.