A short personal anecdote to start off this week’s review:

In early 2016, I spent four months studying in London and fell in love with the city. I’d been before (on much shorter visits) and felt the same way, but the time I spent there as a student gave me the opportunity to explore every nook and cranny, and each corner I discovered only enamored me more so. Since the day I left, I’ve been dreaming about returning.

Today, I turned down the opportunity to study writing in London with one of the country’s well-respected drama MA programs. There were a number of reasons it wasn’t the right time to go, but it broke my heart, as I knew it would. Immediately after sending the email, I turned on Ted Lasso. 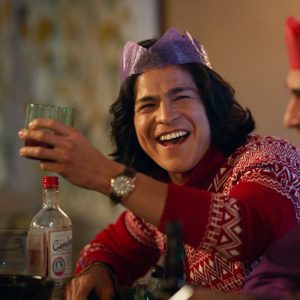 The first time a panoramic shot of the city appeared onscreen (Trafalgar Square, I think it was – about ten minutes in), I let the tears flow freely. The episode, one of the best yet of either season, kept them flowing freely. I don’t know what business this show had hitting us with Christmas in August, though as someone that will watch Love Actually on her birthday in the middle of the summer, I’m not complaining. Aside from Jamie, who wasn’t aware that being a Secret Santa involved acquiring a gift for one of his teammates, the AFC Richmond squad is in the swing of the season. Ted is planning to spend the day on FaceTime with his son and ex-wife, Coach Beard is attending a holiday event at Stonehenge with his ex-girlfriend – with whom he purchased tickets pre-breakup (yikes) – and Rebecca is one of the lucky invitees of Sir Elton John’s Christmas party, which at the time once again immediately made me think of Bill Nighy in Love Actually.

From here, we split off into three sub-plots, each of which is just as simply heartening and lovely as the next. Higgins and his family open their doors to footballers who are unable to spend the holidays with family in their home countries, including Dani Rojas, Sam Obisanya, and more teammates than had ever taken them up on the offer before. Homemade dinners and plenty of alcoholic beverages in tow, AFC Richmond surprises the heck out of the Higgenses, but at no point is there the sense that a sort of intrusion has been made – except one of unsuspecting pleasant surprise. Which in Britain, to be fair, might very well count. 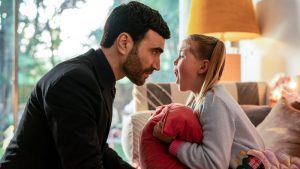 The second story we follow, and my favorite of the three, features Keeley and Roy, whose plans for “Sexy Christmas” are thrown off course by the unexpected need to host Phoebe, Roy’s niece. (And, though Sexy Christmas sounded fun, I’d just like to reassure Keeley that she definitely got the most out of it by drinking straight from the chocolate fountain she’d had set up.) Phoebe and Roy’s relationship is easily one of the highlights of Ted Lasso, shining even more brightly here as his protective uncle side takes over. Instead of intimidating the schoolboy who has been making fun of Phoebe’s abhorrently bad breath, the trio goes door to door in Roy’s “posh” neighborhood, with the understanding that if a dentist is not found in ten houses’ time, both Keeley and Phoebe get 1,000 pounds each. This struck me as wild, being tied as I am to the American healthcare system until my death, but I was all for the hilarious interactions between Roy and various members of the British public it provided. Especially when, upon finding a dentist on the tenth house (sorry about the cash, Keeley and Phoebe), the “ussie” football fan from the pilot episode makes a reappearance, a quality little throwback that could not have been incorporated more perfectly. And, of course, the Love Actually recreation. Once again, I let the tears flow freely. The magic of this moment, as Roy, Keeley and Phoebe use the film’s iconic “say it’s carol singers” scene to confront Phoebe’s bad breath bully, filled me with the kind of gleeful delight that can only be compared to that of a child on Christmas Eve. 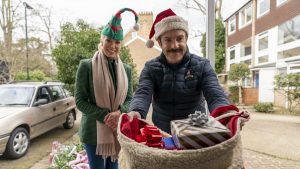 The show’s titular character, meanwhile, is not having the Christmas he thought he would. After Henry rushes off to inspect the drone Ted has sent him as a gift, AFC Richmond’s manager drowns his sorrows in glass after glass of whiskey while watching It’s a Wonderful Life reruns. As anyone who has ever experienced depression can attest, that’s a dangerous spot to be in, especially during a lonely holiday season. Thank goodness, then, that the one person in Ted’s life who understands what the first Christmas after a divorce can be like is there in a red cape – er, coat – to save the day. Perhaps a cliché, but not feeling like one here, Rebecca takes Ted along while she delivers Christmas presents to children in the neighborhood, which she apparently had done for years before Rupert ruined her motivation for anything besides destroying AFC Richmond. Nevertheless, it was very touching for her to acknowledge their shared experience with Christmas post-divorce, and her reveal to Ted that she simply wanted to make sure he was okay almost made me forgive her for trying to burn him to the ground in the first series. (Rebecca is one of my favorite characters, make no mistake – but the man made her homemade biscuits, for crying out loud.) I worried for a brief moment that this holiday adventure would turn into a romantic moment between the pair, but I should have had more faith in my writers than that – we end simply on a wholesome and heartfelt Christmas concert in the street, which on any other television program would have felt tacky. 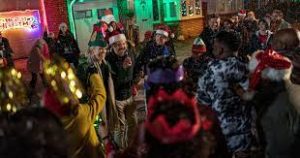 What I love most of all about this episode is that none of the scenarios presented to us represent a “traditional” family Christmas. The showcase here is the deep love between the characters, whether that love is romantic, friendly, parental or selfless. That is at its heart what makes Ted Lasso so special – none of the characters are perfect, but all are deserving of love, all are honestly and truthfully portrayed, and the show never backs down from its own flaws. No notes.

All in all, Carol of the Bells might have arrived early – but a sneak peek present or two on Christmas Eve never hurt anybody, as far as I’m concerned.