It’s 8:21pm, about nine and a half hours since I finished watching this episode, and I have finally stopped crying long enough to start writing.

While every episode of Ted Lasso has left me impressed and emotional to some extent, the first twenty minutes of Do the Right-est Thing fell on the lower side of the show’s spectacularly set high bar. We focused mostly on Jamie’s return to Richmond, which, as predicted, caused some intense squabbling among teammates. Despite what Jamie thinks are his best efforts, nobody – nobody – except maybe Ted are happy to have him back in the locker room. Though he does seem to have genuinely changed – and the show has done a very convincing job over the course of one episode making it feel like this is the real deal – his arrogance is not so easily scared away, nor is his conviction that his past misdeeds can be fixed by buying everyone on the team a PS5. 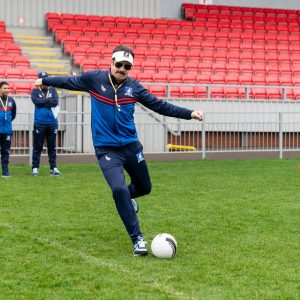 Ted, for his part, further proves his inability to welcome Sharon to Richmond when instead of asking for her advice about Jamie’s situation, he hatches an awkward plot to present himself as an enemy to the whole team, thereby making Jamie seem less antagonistic. Jason Sudeikis is wonderful in this scene, as Ted storms around the pitch insulting his players and punishing them for next-to-nothing offenses. But it did inspire a bit of secondhand embarrassment for me as I sat through it, and I suspect Sharon shared my sentiment. A small callout here for a nice touch at the end of “Led Tasso’s” tirade: while I’d been under the impression Ted was merely playacting, it turns out in order to appear hostile, he has to force himself into a dissociative state that only Coach Beard can snap him out of. Damn, Ted. You can’t say the man isn’t committed, however misguided.

His plan, for the record, works to some extent: Jamie sticks up for the team and earns a few good-natured slaps on the back from his fellow footballers. Ironically, though, what really must have done the trick is the exact scenario Ted had been trying to avoid in the first place: Keeley, forever our favorite proponent of healthy relationships and emotional expression, drops Jamie straight in the psychologist’s chair. We aren’t treated to an inside look at Jamie’s brain (though I could see this coming up later in the season as a flashback – maybe Jamie will end up turning on Richmond yet again), but I suppose I shouldn’t be surprised at the lack of resistance to the session on his part. It is, after all, the chance for him to talk endlessly about himself for an hour.

Meanwhile, Rebecca shows us a side of herself we haven’t quite witnessed before as she focuses on taking care of her goddaughter, Nora, while Sassy (remember Rebecca’s best friend turned Ted’s post-divorce one-night stand from season one?) spends her time in town at a conference. Nora charmed me right along with everyone she met at Richmond, and part of me now wants the whole series to end in a future flash-forward with her taking over for Rebecca as manager, Kenneth in 30 Rock style. Ted Lasso‘s trademark heartwarming moments hit hard during every single one of Rebecca’s scenes with Nora, leaving me with small smiles throughout – until the last ten minutes, during which I was all-out happy-sobbing. But we’ll get there in a bit. 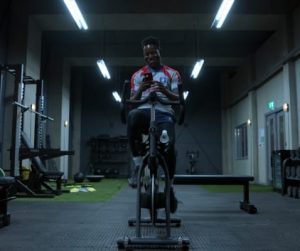 Sam, not Jamie, is the true star of this episode, and he is especially disenchanted here – not only regarding Jamie’s return. The photoshoot he has done for Richmond’s sponsor, DubaiAir, is a point of pride for him until he realizes that DubaiAir’s parent company, Cerithium Oil, has contributed to decades of destruction along the coast of Sam’s home, Nigeria. On top of the obvious corruption spiral he suddenly finds himself part of, it also strains his relationship with his father, which we know from the preceding episodes is very important to him. After pulling out of the DubaiAir campaign and sending Rebecca into a minor damage control crisis (which Nora largely fixes for her, brilliant as she is), Sam tapes over the DubaiAir logo on his jersey before Richmond’s next match. This is the critical turning point for Jamie, and this is where my tears began flowing. I’m allowing myself to believe – for now – that Jamie gets it – finally, that support and kindness are what will earn him forgiveness, not PS5s and empty apologies. But what truly makes the last ten minutes of this episode so utterly and unbelievably emotional is the unconditional support Sam is met with on all fronts – his teammates turning his act of resistance into a full-blown protest, Ted’s “when bad things happen to people like me, y’all have a tendency to write about it without being asked” comment in the press room, the show’s clear commentary on the environment and corrupt governmental action – it all flows seamlessly and beautifully. I am proud to admit I was wrong to doubt the depth of the episode as it began. After its conclusion I have no notes. 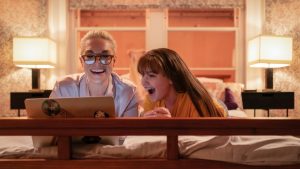 What was very nicely done, I thought, was how perfectly and warmly everything tied together for a 34-minute story. The above comments aside, there was more than one moment throughout that proved the show’s capacity for understanding human nature over and over again. Sam’s confrontation with Rebecca over the Cerithium Oil issue, leading her to battle her ex-husband and later bond further with Nora over passive aggressive emails, is a perfect example. And in turn, Nora’s shy schoolgirl crush-esque request for a picture with Sam leading to the entire Richmond team coming together to celebrate the end of their tie-streak (even if it came at the cost of a game) made me feel as fuzzy as if I’d just arrived at the final scene of a Hugh Grant romcom. That this moment doubly served as the one of real acceptance for Jamie rejoining Richmond cemented the smile on my face almost before I’d  realized it was there in the first place. If the first twenty minutes of episode 3 were at all lacking (and to be clear, compared to shows that are not Ted Lasso, that’s still very, very good), the concluding ten were the best the series has put out to date.

Last but certainly not least, I’d like to close with a nod to Ted Lasso‘s composers, Marcus Mumford and Tom Howe, who are the geniuses behind a personal episodic teardrop rate that rivals This Is Us.

It’s going to be a long week while we wait for episode 4.