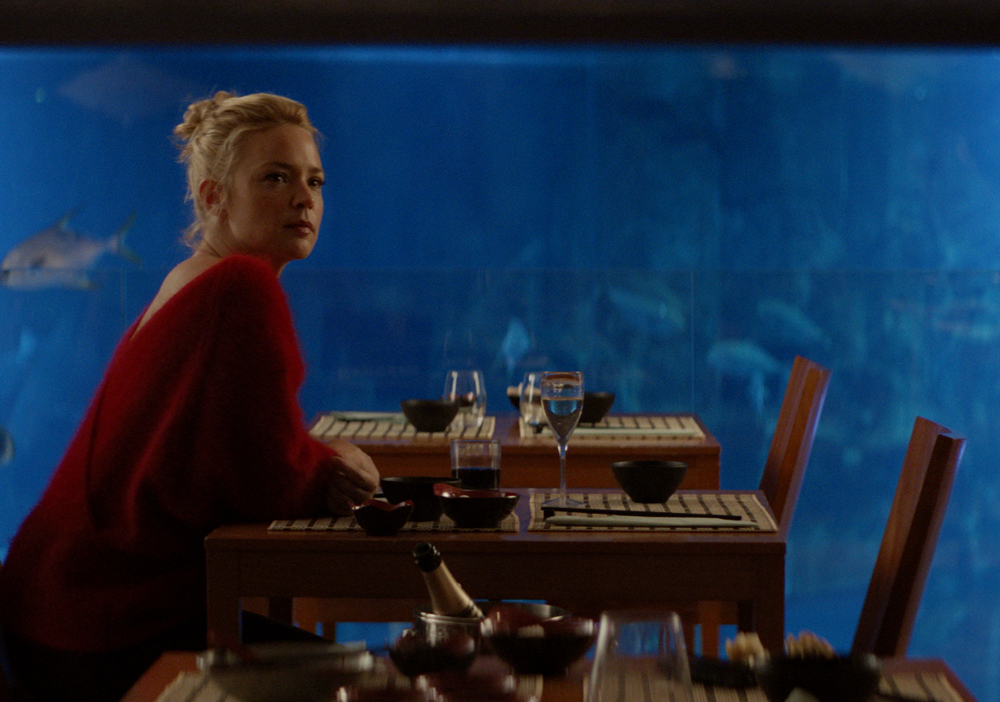 Beware:  I’m a totally broke writer who would love to eat at a rotary sushi bar.  I’ve also been dealing with disconnection and ambiguity.  If you happen to be in a similar situation, and/or for other reasons, this movie will be a pleasant trigger.

Sibyl is a film about a woman comfortable with emotional and social disconnection.  Hers is a self-imposed isolation we witness from the first second of the film all the way to the last.  The movie ambiguously begins with a random man talking at our title character Sibyl – whose name is not confirmed until the middle of the movie and only that one time – but in this opening scene, we are thrown into the middle of a meeting where a man gesticulates and pontificates that “writers basically take readers hostage.”  Sibyl and the man are at a sushi bar.  She eats as he rambles his perspective that “people are saturated with info.  The fact is, writers have less legitimacy now.”  Sibyl is a writer, and a therapist.

So continues this French movie with Sibyl roaming around and being reluctantly half-present during discouraging, unhealthy, and toxic interactions.  For ninety-five minutes, viewers live with Sibyl and her inner gnawing numbness.  The opening scene set the stage for a sombre movie, which is a smart and cerebral comedy with the target audience being snooty creative adults.  I’m not derisive about snootiness.  I’m snooty myself, so I found this psychological tragicomedy to be both demanding yet satisfying.  Possessing a vibe of Nora Ephron’s When Harry Met Sally, Lawrence Kasdan’s The Big Chill, or, for a more recent reference, Bob Odenkirk’s Melvin Goes to Dinner, Justine Triet’s Sibyl is a film where middle-class professionals sit and converse over food and beverage.  It’s a type of film Boomer suburbanites observe while drinking wine – silently amused by something they do not laugh at – a genre dear to my own heart.

But wait, here’s why you should watch if you’re not a Boomer:  The film director Justine Triet brings us so close to her title character, that we too begin to vicariously exploit others, and there are moments when it fleetingly feels as fun for us as it might for Sibyl.  Though emotionally disconnected from everyone, Sibyl engages in orgasmic sex, conjures rage in others, and goes to a sunny Greek island.  Yes the audience is attached to Sibyl and her alone-ness, but we watch scenes of parties where there’s live music, and during these covid times, I appreciate that offering from this movie ‒ its many scenes of socializing, congregating, eating at restaurants, humping, hugging, all of which I’m not doing right now.

Sibyl is a dramatic comedy worth watching at home during quarantine when we cannot (and shouldn’t) go to theatres.  It can be consumed as a pre-pandemic period piece, especially in scenes when Sibyl counsels at her private practice.  Remember those days?  Remember sitting across from your therapist??  But from what we glean of Sibyl externally – what I think many of us do, when there is covid and when there isn’t – we see Sibyl doing what she calls “faking it.”  For example, we see this established therapist and published author take her apparently happy kids to a crowded carnival fair but then, at a concession stand, Sibyl bumps into a former lover and is suddenly on the verge of breaking down.

Sibyl is a character who always seems on the verge of destabilizing.  But perhaps watch Sibyl with a covid mindset of nostalgia.  I’m a cinephile who wishes to socialize and congregate like before, so that at the very end of this understated French film I was punched with a clarity of what a well-made cautionary tale Sibyl is:  The movie wraps up with another significant restaurant scene, when Sibyl, her partner, and their children are celebrating Sibyl’s birthday with dinner and cake, and we see Sibyl sitting across from her partner Etienne and thinking, “I’ve stepped back from those around me.  I see them as characters.  Etienne has no access to me.  I feel nothing concrete with him.”  So close proximity does not guarantee closeness, no matter how much faith I put into zero social distance.  Because there are Sibyls in this world.

Jul 19, 2021 chicagofilmscene
Playing in a Chicago Theater Near You

Sep 18, 2020 Bishop
Playing in a Chicago Theater Near You