Hello all! Can you believe it’s the end of summer already? I thought this was a fairly good summer movie season. I saw several films I liked and even some films I loved. Below, in no particular order, is a list of my favorite films from summer 2021. Any movie I’ve seen released from May to now is fair game. I have not seen everything of course but I do think all of the films listed below are worthy of your time. I encourage you to seek out the ones you haven’t even heard of. With that introduction out of the way, let’s get to the films:

Yes, I am apparently the only person in America it seems who hasn’t seen Hamilton. With that being said, this was my first proper Lin-Manuel Miranda experience and let me tell you…I really dug it. This film put a big smile on my face. It’s a musical with songs that I couldn’t get out of my head. The energy and style of this film certainly hypes you up and this Broadway play becomes a true cinematic vision. My favorite songs in particular would have to be the opening number and the “96,000” number. The film has heart and pride flowing through its’ veins while the multi-generational cast makes sure you feel every emotion coming at you. This is definitely one of the feel-good films of the summer and you need that to beat the summer heat. Plus, now that it’s coming to home release, you’ll finally have the chance to dance in your living room to it. 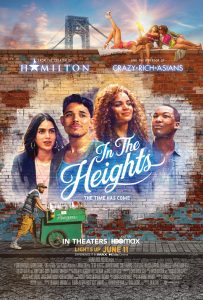 Looks like the legend of Candyman is in good hands. A spiritual sequel to the 1992 original, writer/director Nia DaCosta and co-writer/producer Jordan Peele take the social commentary of the original and run with it. This new Candyman is unapologetic in its’ commentary on gentrification as well as black persecution. DeCosta shoots the typically bloody horror sequences in creative ways and the score by Robert Aiki Aubrey Lowe eerily sets the tone during the opening credits. First and foremost though, the film has an interesting new take on the Candyman legend. Yahya Abdul-Mateen II and Coleman Domingo shine in their roles here (between this and Zola, Coleman Domingo is absolutely on fire). To top it all off, the film ends with a great closing line and a nod to the original. The long wait for this film paid off. Now it’s time to break all of my mirrors. 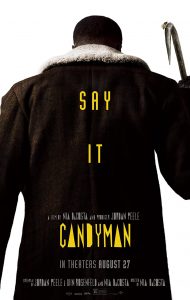 Edson Oda. Remember that name. A fresh new talent, Oda has written and directed his first feature film and it soars. Nine Days asks some deep questions with its’ original premise. Here is a film all about life. Its’ joys. Its’ pain. Its’ meaning. It’s a film about the little moments that make us. I had previously liked star Winston Duke in films like Black Panther and Us but here he is given full reign and he truly shines. It’s definitely a breakout performance. Benedict Wong and Zazie Beetz also join in on giving strong and affecting performances. Lastly, adding to the film’s overall feel is a moving score by Antonio Pinto. There are moments in this that are beautiful, moments that are tragic and moments that are both. Nine Days is a slow-burn so don’t expect anything too flashy. What you should expect is a film that has a true soul to it. 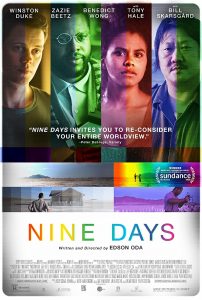 I’ve been a fan of Jena Malone’s for awhile so seeing her pop up in anything is always a nice treat. Here she is joined by Pablo Schreiber in a drama about two people trying to stay above water. Not necessarily light summer fare, this indie drama really surprised me. Malone plays Dolores, a single mother of three, and Schreiber plays Wayland, her old high school boyfriend just released from prison. Not only do these two actors create characters that are flawed and complicated but they are trying to become something better for themselves and those around them. There’s also Chancellor Perry, Amelia Borgerding and Parker Pascoe-Sheppard as Dolores’ offspring and they are all able young performers. You know I cared about these characters because I felt every setback they had to deal with. This is writer/director Sabrina Doyle’s feature film debut and she’s certainly starting out on the right foot. 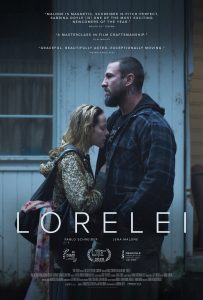 I’m not all that familiar with Danish cinema but, after 2018’s The Guilty and now Rider of Justice, I’m thinking I should be. Here is a film that handles a few different genres all very well. You got your action/vengeance thriller with Mads Mikkelsen, a family drama about grief and a dark comedy about a group of hackers. I’m still surprised it all works together so well. The comedy does not take away from the drama and the drama makes the action better. The film is a tightrope that director Anders Thomas Jensen walks perfectly. Mads Mikkelsen is always a reliable actor but Nikolaj Lie Kaas, Lars Brygmann and Nicolas Bro work wonders as well. Together they were a team I never tired of. Any fans of Mads Mikkelsen owe it to themselves to see this. Riders of Justice is a film that offers shootouts, sex jokes and a strong heart. I absolutely loved it. 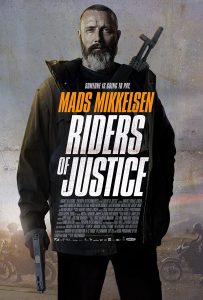 Pig has the set-up of a revenge thriller yet this is not that kind of film. Pig goes for something deeper. Whoever still has this silly notion that Nicholas Cage is a terrible actor REALLY needs to see Pig. He absolutely stuns in this film.  Also, I must mention Alex Wolff as he shares the screen with Cage for most of the movie. I’ve seen Wolff in films such as Hereditary and Old and thought he was fine. I never would have thought he’d give a performance like this. He holds his own against Cage and it’s definitely the best work I’ve ever seen from him. Pig is one of those films that made me stay silent through the end credits mainly because I was so affected by what I had seen. I saw this with three of my good friends and they were just as blown away. How this is Michael Sarnoski’s first feature outing as a writer/director is insane. Imagine hitting a home run on your first at-bat. It’s currently available to rent on-demand for only 7$. Take a risk and watch Pig. 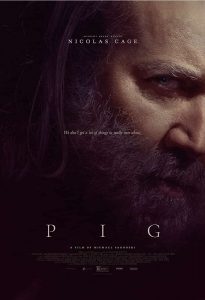 James Gunn…you’ve done it again. The madman behind Marvel’s Guardians of the Galaxy has now directed a film for DC and oh man does it kick ass. Look Marvel, I love you. You know I love you. But The Suicide Squad is not only the best superhero film of the year so far, it’s one of the best films of the year period. If Marvel’s other 2021 offerings want to keep up, Shang-Chi and The Eternals better be good. Here is James Gunn unleashed. The humor is absolutely demented and kept me laughing throughout. Watching the camaraderie between these anti-heroes is what really sells this film as an absolute blast. It’s hard to pick a particular stand-out since everyone is so entertaining on their own (though I will say I love King Shark with all my heart). For anyone thinking that comic-book movies are getting stale, may I suggest you watch The Suicide Squad. 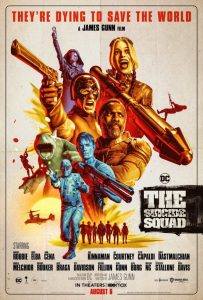 Here is a film that gave me a breath of fresh air. If you didn’t read the review I posted when this originally came out, I’ll break it down for you: this might be my favorite movie of the year so far. This film gives me life. Director Carlos Lopez Estrada has impressed before with this year’s Disney film Raya and the Last Dragon. Not only that, he really made a name for himself with the 2018 knockout known as Blindspotting. Well, Lopez Estrada is no fluke. Sorry In the Heights but this is my feel-good movie of the summer. Yet Summertime also cuts real deep when it wants to. I know close to nothing about spoken word poetry but damn if this film doesn’t use it well. Every performer here gives it their all (please give Marquesha Babers more roles in the future) and the enthusiasm is infectious. I hope more people discover this film because it is one to celebrate and hug. 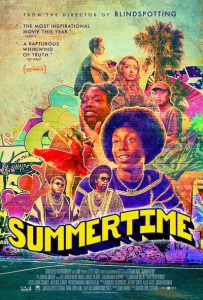