Strange & Unusual: What I learned from Tim Burton’s ‘Beetlejuice’ (1988) 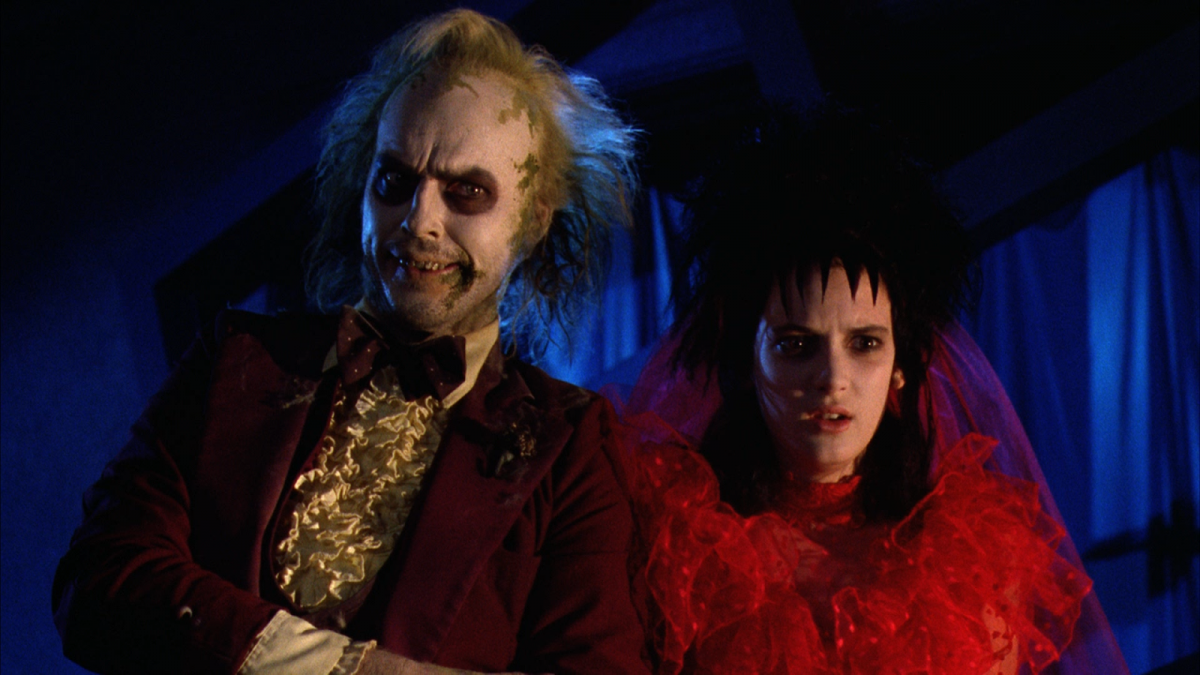 If you’re a regular reader (and if you aren’t, do be pleeeeaaaaase), you may remember last week when I voiced my apathy towards Jerry Zucker’s 1990 movie Ghost. Now, I do LIKE Ghost. It’s got a lot of moxie, with a charming cast and a spirited (forgive the pun) script. But the structure is weird, Demi Moore’s haircut is dumb, and the whole thing is just kind of overwrought. AND everything it does was done better two years earlier in Tim Burton’s Beetlejuice (1988). Well, everything except if Alec Baldwin was subbed out for Patrick Swayze.

Beetlejuice is the kind of movie that’s hard to believe wasn’t made earlier than it was or at least as effectively. It’s SUCH a clever premise: A recently deceased couple must haunt their home to try and scare off its new inhabitants. GodDAMMIT, that’s good. I revisited it for the first time since childhood last year and was stunned by how well it holds up. It’s funny, creative, colorful, energetic, and delightfully morbid. The cast all shows up (particularly Geena Davis, Winona Ryder, and Catherine O’Hara), the production design by Bo Welch is lively (I swear I don’t mean to do this) and cheeky, the cinematography by Thomas E. Ackerman is evocative of Looney Tunes and Italian horror cinema, Danny Elfman’s score and accompanying soundtrack strike a perfect off-Horror tone, and Burton is clearly having a ball. His imagination has never been so clearly represented yet coherent before or since.

“Freeman, you blithering dipshit, you didn’t even mention Michael Keaton’s transformative turn as the titular Betelgeuse. The Fuck?”

He’s great. But going back to Winona Ryder’s character for a paragraph, let’s talk about Lydia Deetz. I love this character. Acerbically weary to the world well beyond her years, fascinated with death and the afterlife; I can only assume the character is an analog for a teenage Burton. Recently, I showed some friends the first pages of a script I’m working on and one of them asked, “Does everything you write have a character that could be played by Winona Ryder in Beetlejuice?” The answer is Yes though not intentionally. Like many millennials, I watched this movie a BUNCH as a kid and clearly it made an impact. After this and Michael Lehmann’s Heathers, 1988 made the then 17 year old Ryder a Star and for good reason: She was (and is, don’t get me wrong) immediately iconic. But I’m convinced the SHOT that made her a superstar is in this movie. It is, in fact, her introduction. As the Deetz family moves into the house, two helpers deliver a couch inside. Sitting upon this couch, decked out in all black and casually gripping a Polaroid camera (which will serve as an important plot device later), is Lydia. The shot is composed perfectly, a tilt that takes the audience a second to register just what and/or who they’re looking at. The costuming by Aggie Guerard Rodgers immediately elicits a laugh because of just how much black clothing she piles on to a human. And Ryder plays it perfectly. Unimpressed but curious and Teen Tragic; we are simultaneously endeared and alienated to and by this character. A perfect visual introduction.

This is just one example of maybe Beetlejuice‘s greatest strength: Its characters. Burton has made better movies than this but few as memorable. Geena Davis shines as our endlessly earnest and practical heroine Barbara Maitland. She is overwhelmed by the mortal shift her “life” has taken but is determined to conquer it, innocently tapping into her more mischievous and (devious) side in the process. Davis believes in Barbara’s plight so we believe in Barbara’s plight. On the other hand, there’s Catherine O’Hara who steals every scrap of celluloid she’s on (as she always does) with her turn as Lydia’s stepmom, Delia Deetz. A vague New Age Art-Type, she’s committed to her (charitably) gonzo craft and winds up in increasingly insane outfits (por ejemplo: A glove hat and sweatER pants) and making increasingly deranged sculptures. That could be all there was to her, but O’Hara plays it so boisterous and acidic and clueless and pathetic and, ultimately, sympathetic. As impactful as the character of Lydia was for me, Delia’s my favorite hands down.

And then there’s Betelgeuse. The Ghost with the Most. Michael Keaton deserves every shred of credit he gets for his crafting of the titular phantasmagoric sleazeball. It is a performance so good, so fully realized, any imitators or wannabes can’t help but pale in comparison. He’s also indicative of Beetlejuice‘s primary, nearly fatal flaw: The third act is an Unmitigated Disaster.

I would argue that, in the comedy genre, you can’t find a better first 2/3s of a movie than Beetlejuice. It is always bringing something new to the table, with endlessly likable characters discovering an endlessly interesting new world. And representative of the fun, spooky chaos is Keaton. He only has about fifteen minutes of screen time, with at least half of it reserved for the climax. I don’t know if such limited screen time is to be credited for the character’s success. I don’t think so. Betelgeuse is a fascinating, repulsive little creep and Keaton is so damn watchable in the part. There isn’t really another character like him. But come the third act he introduces a boatload of under developed, out of nowhere rules that hijack and dictate the film’s climax. It’s been leading to this; his presence is a malevolent, anticipatory one but it feels contrived. Suddenly there’s a wedding and our heroes the Maitlands are shunted to the background as Betelgeuse mugs and dances until they stop him. It could have been pulled off, his sudden appearance forcing the Maitlands and the Deetzes to work together to stop him but there’s no cohesion to it.

From what I understand, the script (credited in the final film to Michael McDowell and Larry Wilson) was originally much darker. What was conceived as an R rated, HORROR Comedy was warped and twisted into a PG, mostly family friendly Spooky Comedy. Couple this with Burton’s notorious inability to stick a landing and the mess that is Beetlejuice‘s last act makes sense. And what we get is serviceable. It’s meaningless eye candy, feeling like a bunch of gags and visuals they couldn’t fit into the film elsewhere all piled up on each other. And the last four minutes are perfect. But what came before deserved better.

The climax isn’t the only problem. There’s a lot dialogue that feels random and out of place, it’s inconsistent with its own universe’s rules, and Burton will always spring for style over substance. But these qualms are easily forgivable; they all feed into the macabre joy of Beetlejuice. It’s messy by design but excels in its strengths far past its weaknesses.