I really enjoyed this one, which surprised me a bit. 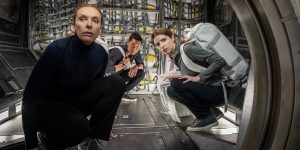 The concept isn’t new: a small team of people on a mission to Mars, and not everything is as it appears. Martian dramas never get old onscreen, or in real life if you’re like me and obsessed with all things galactic. Stowaway, though, is unique in that nothing… really… happens. The plot follows the mission-to-Mars crew as they are forced to choose whether or not to kill a surprise fourth addition to their operation when it becomes clear there is only enough oxygen on the ship for three people. Now that someone has made a film (Joe Penna (Writer, Director) and Ryan Morrison (Writer), to be exact) about this hypothetical, it seems impossible to believe it hasn’t been done before, multiple times, so often we’re bored of attacking the same question. If it had, this film never would have worked, especially given its lack of real action or engaging plot. Luckily for Penna and Morrison, the question hasn’t really been explored much cinematically, and as a result their film holds up.

As outlined above, the entire film takes place aboard the spaceship carrying Marina (Toni Collette), Zoe (Anna Kendrick) and David (Daniel Dae Kim) to Mars, where they intend to cultivate algae in an attempt to sustain oxygen on the planet. Unexpectedly, they find Michael, a launch support engineer, accidentally stowed away onboard, and it quickly becomes apparent that he has irreparably damaged the CDRA – a device on the ship that cleanses CO2 from the air. Forced to confront the implications of four people breathing in a supply of oxygen that will only support three, the team clashes over what to do – from David, who comes to the difficult conclusion that Michael should be sacrificed, to Zoe, who maintains that there must be a way to save Michael if they can only put their heads together and find it.

Eventually, they do think of a solution – a risky and dangerous one, but a solution nonetheless – and David and Zoe climb the spacecraft’s tethers to the launch vehicle in an attempt to fill their tanks with liquid oxygen and replenish their supply onboard the ship with more than enough to sustain the four of them until they reach the red planet. Things seem to be going well as they reach the launch vehicle – Zoe happily confirms that there is plenty of liquid oxygen to go around, until a solar storm hits out of nowhere and forces them to retreat. Unfortunately, in their haste to make it back to the spacecraft safely, they lose the little liquid oxygen they had managed to recover, and we’re back to square one – only more urgently. 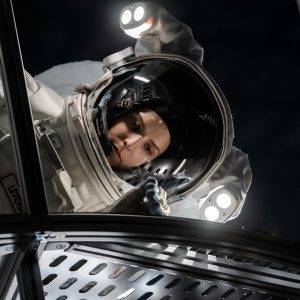 What’s really well done here is balance – while Marina is very much in the middle between Zoe and David’s differing perspectives, it’s very difficult to be fully for or against either of them. What the film lacks in an energetic plot line, it makes up for in the tension between David and Zoe, which contributes heavily to its falling into the “thriller” genre. The unspoken “what would you do?” that underscores the whole film grants the perfect amount of uneasiness, and when, towards the end, Zoe exposes herself to a lethal dose of radiation by re-climbing the tethers during the solar storm and cutting off the launch vehicle’s oxygen leak, it is a genuinely sorrowful, powerful moment. Again, the film’s lack of action and a hard-driven plot works well to its advantage, as we’ve been so intimately invited into the plight of the characters it is hard not to feel attached to any and all of them.

I’ve long maintained that Anna Kendrick is superbly underrated, but I admit I was still hesitant to see her perform a dramatic role in such a branch out from her usual projects. A few times, I was drawn out of the story at the sheer oddness of seeing Anna Kendrick in a space suit. Aside from that, however, she really did an excellent job here. Kendrick brings a youthfulness to Zoe that does not make her appear inexperienced or underprepared for her mission, but does play heavily to her innocence, and watching her hope shattered to the point of self sacrifice makes her character growth extraordinarily tender to watch. Equally as formidable a talent as Kendrick is Daniel Dae Kim, who, as an older POC man, has Seen Some Sh*t and understands that sometimes there isn’t a way out. Together, this is what makes the relationship between David and Zoe play off of each other so well. When they disagree, it’s not just a difference of opinion – it’s agonizing to see Zoe’s heartbreak manifested through David’s words, and when at the end of the film they share a moment and Zoe tells him to “go home. Have a kid and send them to Yale,” the tables have turned and she is now the one explaining to him that there is no way out. Their onscreen relationship, professionally and personally, is an exquisitely performed dance, and it was one of my favorite things about the film.

Absolutely. This film is heavy content-wise and not necessarily for those that are looking for some fun Friday night laughs, but it does ask some interesting questions, and tackles the thriller genre in a new and neat way. Give it a watch. I certainly don’t think you’ll regret it.