Watercooler Reviews | “Staged” Season 2 – We Didn’t Think We’d Need It, But Here We Are 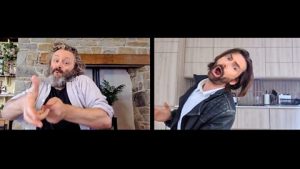 I think the only thing I’ll be sad about leaving behind from these COVID times is Staged, the delightful David Tennant/Michael Sheen meta-comedy. As vaccinations ramp up, it’s likely we’ll reach at least some level of normalcy by early 2022; thus there will be no need for all our social and professional interactions to happen over Zoom/Skype/FaceTime etc., and the basis for a potential Staged Season 3 will be a moot point. Of course, nobody in June 2020 thought there would be cause for a second season, either, and here we are. 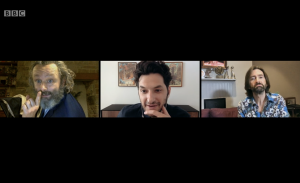 A brief recap: Season 1 of Staged, which still somehow feels like it aired yesterday, featured Michael, David and Simon Evans all playing exaggerated versions of themselves as they attempted to continue on with rehearsals for a West End play via Zoom. Season 2 steps up its sense of self-awareness even further as the characters recognize Season 1 as the television series that it is, and David and Michael realize the show is being recast for an American audience – with everyone reprising their original roles except the two of them. Their interactions continue to be outrageously funny, whether they are focusing their annoyance on a common enemy or directing it at each other. While I think the premise for Season 1 itself worked more smoothly, recasting the “David” and “Michael” roles as Actors That Are Not David and Michael™ lends the show the opportunity to bring in a host of guest appearances, and it wastes no time in doing just that. Whoopi Goldberg, Simon Pegg, Cate Blanchett and Ewan McGregor are only a few of the massive talents that grace our screens over the course of 8 episodes, and it is as glorious as it sounds. A special shoutout goes to Ben Schwartz, whose utterly perfect comedic timing does nothing to undermine his believability as an overworked, overdetermined, over-cheerful industry assistant. Perhaps I find this particularly funny on a personal level, having been an industry assistant myself, but in any case, Schwartz’s performance is mischievously hysterical. 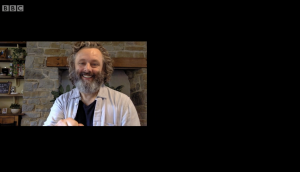 All that said, the most enjoyable episode of the season for me was far and away the finale, due to a short moment around the halfway timestamp that shows Michael smiling sadly at a black screen after David abruptly ends their video chat at Georgia’s request. He is off to work on a new project – finally – and this time the call has a sense of finality to it as we understand along with Michael that David’s availability is about to massively shrink. Michael’s “I’m still not ready” and “Well, I’ll miss this” are heartbreaking, reasonably but somehow still unexpectedly so. This series’ success has banked heavily on the entire world understanding its source material and the emotions its two lead characters are experiencing, so it’s no wonder we’ve all been shaking with uncontrollable giggles for most of it. But it’s lovely that Staged held off on showing the other side of that assumption until the end – the disconnection and relative disintegration of interpersonal relationships –  because it hits us much harder when something a little too relatable shows up on the spur of the moment. Of course, Staged has been teasing David’s upcoming work since the beginning of the first season, but his Waiting for Godot-esque departure has been such a running joke we never dreamed it would actually come to fruition. This unfolding of events represents the sharpest and most painful point of COVID’s quintuple edged sword, a sword on which all edges pinpoint a different part of the human body or psyche to target, and it is handled with grace here. 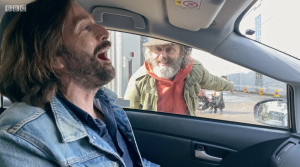 Of course, if they were going to depress us halfway through the episode, they had to reward us for seeing it through to the end, and what a charming recompense it is as our two favorite best frenemies get to see each other – in person! – when Michael surprises David with a social distanced visit to his set. As always, the two are splendidly themselves, and their unspoken relief at a real-life interaction is palpable, a truly lovely warmth added to the end of the season. 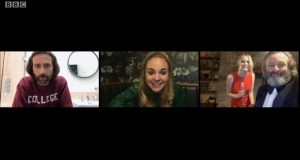 The bottom line: Staged won’t change your life, but it’s been a long time since I have enjoyed a piece of media quite this much.