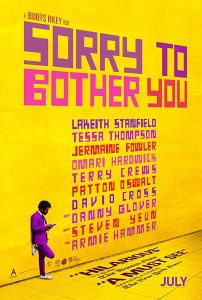 Today I watched a movie called “Sorry to Bother You” which everyone in the world needs to see.

I was blown away by how well-written, well-acted, funny, and unnerving this movie is. I don’t want to say too much about the plot, aside from it’s superficially about a young black man trying to work his way up the corporate ladder at a sketchy telemarketing firm owned by a multi-billionaire Jeff Bezos type. And that’s all I’m going to say – there is simply no way to discuss the plot without giving away major spoilers, and I love this film too much to betray it that way!

There was a film from the mid-90s called “Smilla’s Sense of Snow,” and while it was basically a murder-mystery for 70% of its runtime, the final act took a completely baffling sci-fi twist which the film had not remotely earned and devalued the rest of the film.

“Sorry to Bother You” earns its twist, and I was completely engaged and entertained throughout. This is a film which warrants multiple viewings and thorough dissection. Final grade: A+