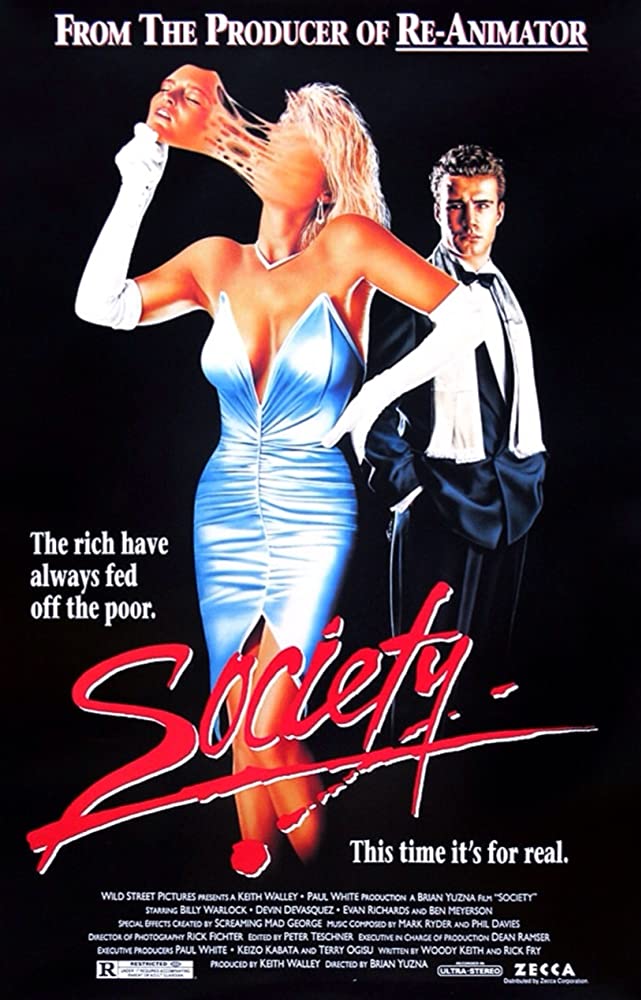 In the “body horror” genre, there’s the good (the first Re-Animator movie, and pretty much anything by David Cronenberg), and there’s the bad. Squarely in the latter category is “Society,” directed by one of the producers of Re-Animator, yet somehow several degrees removed in quality or entertainment value.

The film is a completely unsubtle and unengaging satire of class warfare set in Beverly Hills. Teenager Bill Whitney (played by Billy Warlock, doing his best Michael J. Fox impression) suffers from hallucinations, but otherwise has a pretty bright future – he’s a basketball star, he’s on the debate team, yada yada yada. When one of his friends convinces him that his parents and sister are not what they seem, Bill’s life begins to spiral out of control.

Or at least, that’s what the movie wants us to think. The movie’s pace is plodding, and repetitive scenes last way longer than they need to. It takes nearly 70 of the film’s 90-minute run time for anything truly engaging to happen, and when it does, the paper-thin characters engage in incoherent behavior so disgustingly over-the-top, I just wanted it to be over.

Body horror is only effective if it happens to characters we care about. The aforementioned David Cronenberg is a master in this genre. His 1986 remake of “The Fly” is a perfect film – actors with real chemistry embody vulnerable characters who we quickly empathize with. We don’t even care if we know we’re watching special effects – stunning though they are – because we really believe these things are really happening to these people.

No character in Society is developed beyond “pretty sister,” “rich father,” “affable therapist,” you name it. Characters appear and disappear randomly. Setups early in the film don’t pay off – Bill’s hallucinations turn out to be reality but they don’t change how his character faces the events of the third act. He utilizes neither his skills as a basketball player to escape his predicament, nor does he use his oratory skills to talk his way out – he simply gets into a fistfight with his antagonist. The entire film, in fact, is just a setup for the “shocking” final 15 minutes, and it’s definitely not worth the wait.