Seance (2021) directed by Simon Barrett is a paranormal, mystery film that flounders with a crucial element- 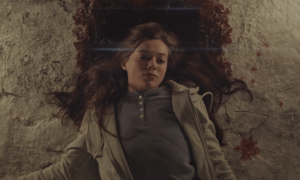 suspense. The film ignites with a student death at an all girls boarding school after a group of friends performed a seance to rouse the spirit of the campus ghost story. Fast forward to the arrival of a new student, Camille Meadows (Suki Waterhouse), conflicting with the group of friends of the deceased as she takes their friend’s place in the school. She ends up connecting with a portion of the group and partakes in another seance to contact their dead friend. By the next morning, another one of the girls is found dead and the story unfolds from there. 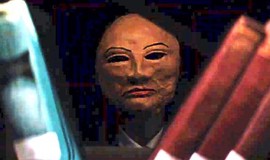 Suspense cannot only be held by the characters within the story. It has to be held by the third party of the audience in some capacity even if it is initially misleading. The simplest way to achieve that is to cue the audience in on something the characters may not know about. To draw a quick comparison, an example of a well-thought out suspense is Happy Death Day where none of the other characters know the protagonist is reliving the same day unless she explains it. The audience is clued into what is going to happen each day which widens the story’s variety of suspense immensely. The two are quite different but one work understands how to play suspense with its audience. The other treated the audience as an afterthought.

Seance gives an hour of typical cat fights and 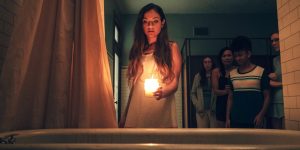 absurd lipstick usage on top of this. When the cast was written as caricatures of high school girls, the acting is completely unmemorable. While the film decided whether it was a paranormal thriller or a ‘ who done it’ story, I was deciding who I was supposed to foster a connection with among the characters. They felt hollow from the intentional vagueness of the film. I’ve never seen a mystery film that has too much mystery but Seance accomplished that. In the place of suspense, the film does not even provide any fun or comedic relief from its overwhelming somber. A more executive vision could have brought a new spin on mystery with this film. 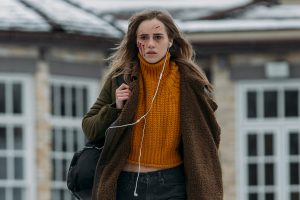 With every review, I find some credit to give with an overabundance of criticism or vice versa. There was no problem with the presentation. Individual scenes and shots held great composition and some striking visuals. The struggle arose when fitting these pieces together for a cohesive narrative. The final story given after the reveal was intriguing but created regret that we were not provided some of the story earlier. It wanted to compel a spectacle through it’s reveal of a revenge driven protagonist to the audience. This could have been accomplished if we were given a crumb of detail to connect ourselves to Camille Meadows.

For the sake of ‘spoilers’, it is difficult to detail the fumble of the film or success of its story. Since it is only available to rent (the cheapest at $3.99 on YouTube), I recommend skipping Seance until it is available on a streaming platform or all together.