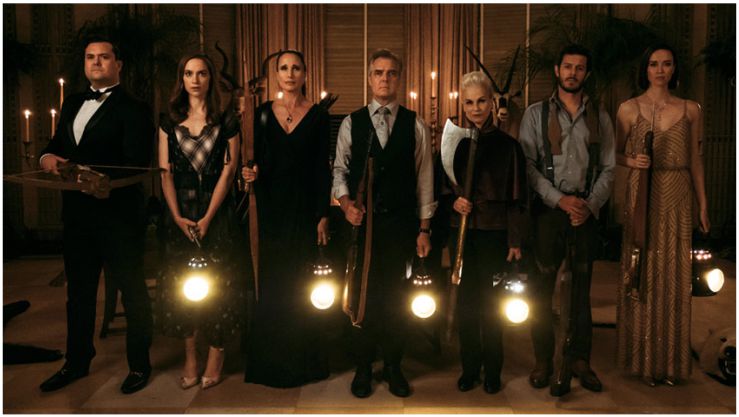 Halloween is right around the corner, which means many of us are looking forward to indulging in some horror movie classics and not thinking about the global pandemic, which is the true horror of 2020. When it comes to horror movies, many enjoy that good ole fashioned terrors of the classic slasher film. On the other hand, I enjoy movies that deliver an equal balance of not only spook, but also camp. The intersection of horror and comedy has been a neo-genre that has become more and more popular as the years go by, and that is something that I have quite enjoyed. The newest funny, yet frightening flick I have come across that has now become one of my new favorite horror movies is the 2019 film “Ready or Not”.

“Ready or Not”, directed by Matt Bettinelli-Olpin and Tyler Gillett, is a movie about a spunky and charming girl, Grace, who after marrying her fiance Alex, is forced to play a sinister game of hide and seek with his wealthy family. Little does Grace know, this game has some deadly consequences for the loser. The Le Domas family acquired a lucrative gaming empire after the founder of the clan made a deadly deal with an evil man, known as Le Bail, that offered to build his fortune in exchange for a very particular family tradition. Every-time a new person marries into the family, they must play a game determined by the mysterious spirit of Le Bail, in order to fully be accepted into the clan. Many of the games are quite harmless and trivial, except for one, which is coincidentally the game that Grace is forced to play, which is hide and seek. Grace hides around the Le Domas mansion, as the rest of the family members seek her. The only difference is that once Grace is found, she will be sentenced to her death via a satanic ritual performed by the family. Not the best way to spend your first night as a married woman if you ask me.

This film has the classic set up for a decent horror movie, but what sent it over the edge was the amount of dark humor that was all throughout this film. It all started with the leading lady and final girl Grace, who was portrayed by the incredibly charismatic Samara Weaving. She is perhaps maybe one of the most underrated actresses out here, who showed she was much more than just a Margot Robbie look-alike, by adding so much depth to her character. Grace was not like all the other helpless horror movie damsels, and we get that impression from one of the beginning opening scenes. We see her smoking a cigarette in a full wedding gown while bestowing a skeptical look on her wedding guests, moments before she is about to be wed. This lets us know this girl is a badass, and sets up the tone for the rest of the film. Samara also added subtle quirks to her Grace character that made her more relatable and made me think that this is actually how someone would act in a horror movie setting. From her hyena-like screams of peril to her snort laughs, these were all things that real people do and didn’t feel so “acted”.

There were also funny moments throughout the movie that were somehow full of camp but also based in reality as well. One, in particular, was when Grace made an escape from the Le Domas mansion after escaping the Butler’s attempt at her capture, and while she thought she left him to die, she made the classic horror movie mistake by not making sure her captor was actually dead. When he comes to, he reports the car stolen, and as Grace calls the car service representative in hopes of getting in contact with the police, Jason the representative decides to shut down the car after it’s reported stolen. Grace begins freaking out, as one would and begins berating Jason with harsh words, to which he accepts with pseudo-politeness like any good customer service representative knows how. As Grace sits in a still car waiting to be captured once again, Jason kindly asks her if there was anything else he could do for her, to which she aggressively responds “You can go fuck yourself Jason!”, and he finally admits defeat and utters a lackadaisical “alright well then…” before ending the phone call. It was a moment that I found funny not only because of the dialogue but also because of the pure reality of the scene. There have been plenty of times where we want to curse out a stranger, even if they are not the culprit of the anger in the first place, but hold it back since they aren’t deserving of the wrath. However, Grace gave no fucks, and let him have it, which he honestly deserved since she was pleading for her life. I’m sure his manager would’ve understood.

Another thing that made this movie deliciously camp was the wealthy socialites turned murderers who tried their best to kill Grace. They were all easily dislike-able, with not only them all being narcissistic socialites detached from reality, but also being terrible killers on top of that. The task of capturing and sacrificing Grace was a task none of them had planned to do that night, and it was clear they were not prepared to carry through with the deed. Once Grace is sent to go hide, we get a glorious and terrifying shot of all of the family members wielding deadly weapons as they set out on the hunt, and this was quite scary until we realize none of them know how to use any of these weapons. One of the family members doesn’t know how to use a gun and can’t even shoot Grace even when she is literally inches from her face, while another watches a Youtube video on how to use a crossbow while hiding in the bathroom. On top of that, Emily, the coked-out sister of the groom, managed to kill two of the three maids accidentally, but couldn’t manage to apply any harm to their actual victim. Seeing these rich assholes being forced to come out of their posh personas and scramble to become bloodthirsty murderers was hilarious, yet frightening since it spoke to the true nature of people, especially ones with exorbitant amounts of money. It’s no secret that once you reach a certain level of status and wealth, you lose a certain grip on reality, and the fact that none of them gave a second thought to sadistically killing Grace proved that. Their livelihood was at stake, and the only thing standing in the way of them keeping their comfortable lives was Grace. Unfortunately for them, Grace tapped into her inner beast and became a ruthless badass, enough to protect herself long enough to survive their attack. To sum it up, their plan to kill and sacrifice Grace to Le Bail backfired and blew up right in their face. Literally.

The task was simple. Kill Grace before sunrise, or you will die. And although many of them were skeptical if the curse was real or not, the final answer was brought to them as one by one, all of the family members exploded in the goriest fashion after failing to complete their task. But hey, they gave it their best shot, especially Emily, who literally shot a maid right in the face.

The last line of the movie, when Grace finally escapes the mansion as police and firefighters swarm it, sums up the darkly humorous tone that was all throughout the film. As Grace sits on the exterior steps, covered in blood, a police officer asks Grace what has happened to her, and right after she lights and takes a puff of her cigarette, she says softly “In-Laws” in such a deadpan manner that we all relate to after seeing the night she’s been forced to endure. This was such a satisfying way to end the movie, especially seeing as the original script had Grace die at the end rather than survive. The directors felt it wouldn’t be right for this badass to meet her end this way, and given the state of the country at that time and currently, it’s nice to have something end on a positive triumphant note. And although I’m not sure if I would’ve been able to persevere and survive the family’s attack, it was nice to see those rich assholes meet their end in a way that was more than deserving.

This movie may be relatively new and somewhat overlooked, but it is one that is full of wit, humor, gore, and chills that make a classic horror movie even more interesting. We can all see ourselves a little in each of the characters, whether that’s trying to learn how to kill or learn how to survive, we all know that inner survival instinct would kick in and we’d go ballistic. Furthermore, the memory of my favorite childhood game may now be ruined forever, but at least it is now being replaced with the thought of one of my new favorite horror films.