Raw (2016, dir. Ducournau) is a masterful suspense film about the complicated relationship between women and food. It explores consumption, cravings, restrictive eating, and binging, all through the eyes of a teenage girl. But, before I get ahead of myself, Raw is undeniably a cannibal film. A far cry from classic horror films with cannibal tropes like The Hills Have Eyes and Cannibal Holocaust, this film has more to say about the act of eating than it does the act of eating human flesh. Most often in cannibal films, the protagonist must escape the monsters who crave them. Cannibalism is the evil and cannibals are the monsters. The audience can relate to the protagonist’s fear—what’s scarier than being eaten alive? For Justine, the film’s protagonist, it is her hankering for flesh and her struggle with this newfound desire that ignites the true horror.

Raw opens with Justine (Garance Marillier), a painfully awkward teenager beginning her first year at a prestigious veterinarian academy. With hazing rituals that make even the most sadistic fraternity look soft, the school could use a horror spin-off… Think Suspiria. A lifelong vegetarian, Justine is disturbed by her school’s final initiation task, where she’s tormented by the upperclassmen, including her sister Alex (Ella Rumpf), into eating a raw rabbit kidney. This final act, which ironically sanctions Justine’s status in the school, is also her first taste of meat. As soon as she digests it, her plummet into irreconcilable cravings begins. Soon Justine will realize animal meat cannot sustain her.

What makes this film so intriguing is its use of cannibalism to incite, not only horror, but an odd sense of shame. Raw plays with cannibalism in a completely foreign domain—under the guise of some coming-of-age facade. All the familiar tropes are there: a new environment, tension with the opposite sex, and a complicated relationship with an older sister. Cannibalism is the undeniable twist. It’s as if Justine has hit a second wave of puberty, one in which she spends restless nights awake, haunted by her demons.  She feels out of place in her body which, for reasons she will soon realize, is rebelling against her.

In the scene I found most personally horrifying, Justine realizes only human flesh will sate her hunger. It’s the quiet agony as she begins to eat her sister’s decapitated finger, the first taste of human meat she will digest, that draws the viewer in. Fascinates them. Justine first smells the bloody finger, inspects it, holds it in her palm. The unrelenting and shameful urge to consume the flesh in turn consumes Justine. She ravages the finger of her sister as Alex lay bleeding and unconscious beside her. The film score reaches its first climactic excess; the haunting pipe organ begins to throb like a human heartbeat as she is overtaken by this new lust. Justine has passed the point of no return, made clear by her resolve to consume human flesh, even if the flesh is that of her own sister.

Raw’s premise could easily have taken a supernatural turn—vampires or monsters or some sort of satanic cult. Instead, Raw focuses on the act of eating, consuming, tasting—eating always depicted as Justine giving into her desire. Her struggle with these cravings, her refusal to eat for days followed by inevitable, violent feedings, may be more difficult to watch than the actual cannibalistic act. 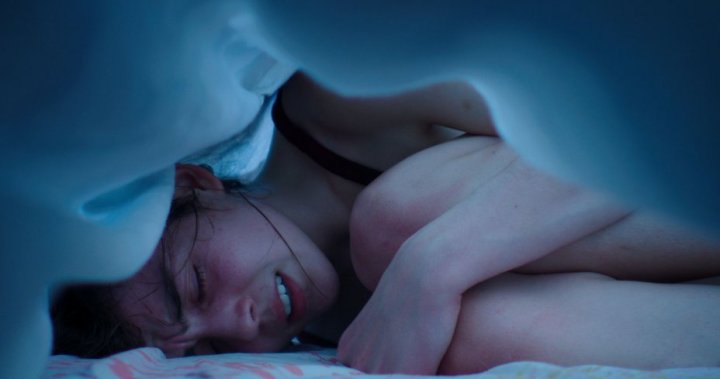 Raw is a hard watch, with excessive blood, guts, and uhhh, cannibalism. It explores the complicated relationship between women and consumption, using cannibal tropes to incite a subconscious horror that reaches far beyond this act. And while not for the faint hearted, it is an undeniably brilliant and twisted reimagining of the classic cannibal film, and one that I haven’t stopped thinking about. Happy watching!

One thought on “Raw: A Dangerous Appetite”