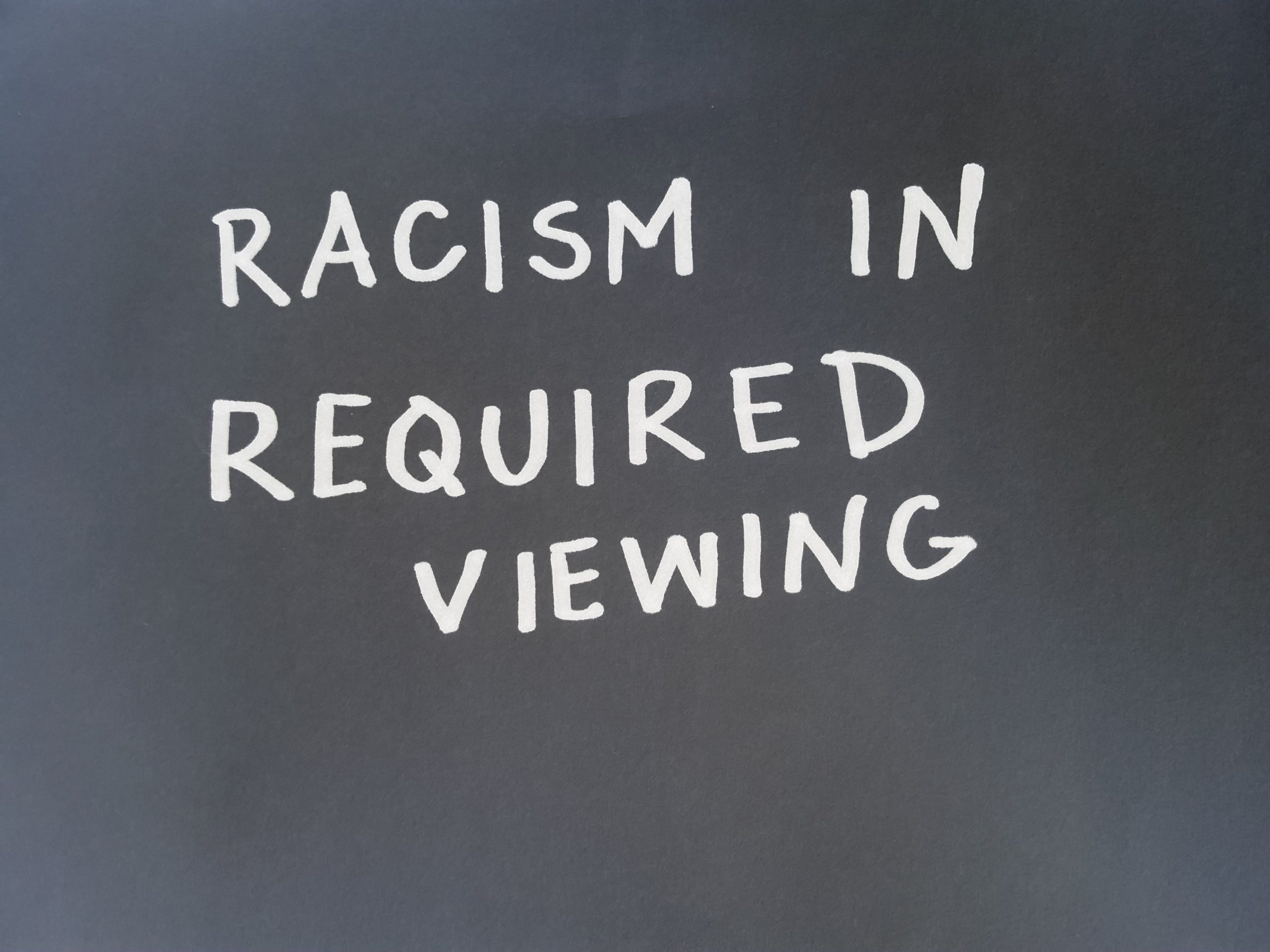 The Birth of a Nation was required viewing within the first month of my film foundations class in 2016. I was encouraged to “look past” D.W. Griffith’s confederate leaning ideologies, and to look at the film from a purely technical aspect. As a freshman in college, I didn’t like the film. Blackface used to represent black characters, the KKK appearing as heroes, and those actors in blackface being portrayed as villains was too much for me to overlook. The confederate leaning ideologies I was warned about were just as subtle as a car crash outside my front window, and learning that the film inspired the reformation of the KKK in 1915 was no surprise. (1) At the time, I was taken aback by the lack of discussion surrounding the white supremacist themes in the film. As we discussed the film in class, the conversation surrounded the technical aspects of filmmaking. I tuned out, and didn’t speak up.

In 2019, The Jazz Singer became required viewing for a film studies class. As I sat in my primarily white university classroom, my professors hand hovered over the “play” button on the movie’s title screen.

“I have to warn you,” She started, “There is something in this movie we can’t look past.”

Blackface, again, being shown in the classroom. As the class became engulfed in conversations about the time period, and how this was acceptable on the screen in 1927, I swallowed back my thoughts.

Why are we even watching this film then? I thought, but didn’t say anything. I regret not speaking up about my concerns, as the conversations never veered into asking why the film was being shown in the first place. As the discussion wound down, my teacher looked to the only black person in the room, and asked her what she thought of the moral discussion.

Generations previous seem to get a pass when it comes to blatant racism in the film world. “It was a different time then”, or “this kind of film couldn’t be created today”, are sentences that float around films made before the current time, and contain horrifically racist themes and visuals, appearing to act as a get out of jail free card for the viewer. The filmmakers of times past were racist, sure, but their techniques and philosophy on film can still be studied, right?

I disagree with that sentiment. There is a moral dilemma in all art communities, surrounding separating the art from the artist. Opinions vary widely on the subject, and appeared as a topic of discussion after the Me Too movement exploded in 2017. However, this same discussion became a prominent debate as the 2016 remake of The Birth of a Nation was creating Oscar buzz in the film world. Nate Parker, writer, director and star of the film, was facing praise from critics, and critique from online audiences. With his 1999 rape accusation coming to light alongside the peak of his career, many were forced to ask themselves whether the film was worth defending or not. Opinions were written by both sides, but one voice stretched over the discussion, and rang as a voice of reason in a time where, once again, the craft of filmmaking was being held higher than the actions of the filmmakers. In an opinion written for The New York Times, Roxane Gay wrote, “I cannot separate the art and the artist, just as I cannot separate my blackness and my continuing desire for more representation of the black experience in film from my womanhood, my feminism, my own history of sexual violence, my humanity.” (2)

Our political climate right now is facing pressure that many have not seen in their lifetime. Spurred on by yet another murder of a black man by a white police officer, the world erupted. It is too early to see the full impact the protests, petitions, and pestering of our elected officials, but it is clear that this is only the beginning. Systematic racism has deep roots in the American landscape, and for many, this current movement is the first time they are being exposed to it on a global scale. The implications of the 13th amendment weren’t taught to me in my suburban Detroit high school history classes, and racist films were screened to me in my university classroom in Chicago.

I re-watched 13th by Ava DuVernay this week. I viewed it for the first time in 2016, just as it was released, and just around the time I had to watch The Birth of a Nation for class. This watch, as a recent graduate of film school, illuminated more than I ever could have predicted. How was 13th, in all of its artistic merit and contextual significance, not required viewing, yet The Birth of a Nation was? Why are films with obvious theme of oppression and racism against black people, with the purpose of understanding their technical achievements, screened in university level classrooms as educational materials? Obviously, there are plenty of films that have the same level of artistic merit and refined filmmaking techniques made by filmmakers who do not carry the same racist ideologies. While the choice to require viewing films such as The Birth of a Nation and The Jazz Singer are likely made out of good intentions, they have negative implications. The status of “classic” is thrown at these films often, yet the desire to screen films of this regard fails to recognize the many other classics that are created by POC, with inclusivity at the forefront.

The film industry has a long way to go, and the film schools supporting it have even more work cut out for them. While 13th was not required in my educational career, I believe it should be. If you’re looking for an old Hollywood classic, watch Stormy Weather. Filmmakers, and educators, have power over the public discourse, and it is us who can represent people, free from the racist stereotypes pushed onto them.