Pretty Little Liars: A Show Made by and for Horror Film Lovers 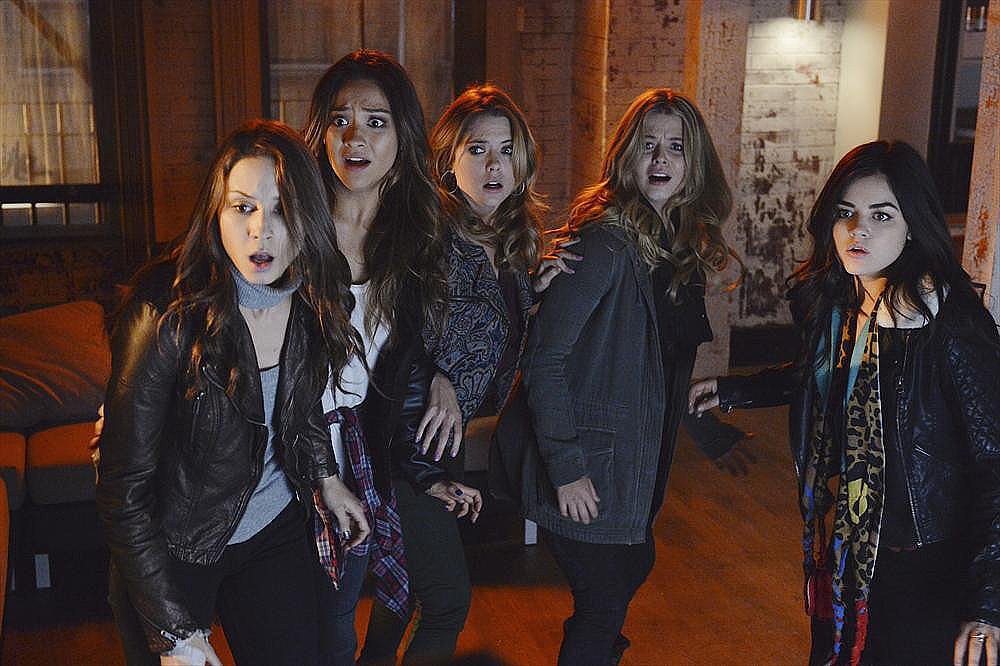 Disclaimer and spoiler alert: I have only seen most of the second and third seasons of the show. I do not at all claim to be an expert. The piece discusses plot points from seasons 1 to 3.

Pretty Little Liars, a show about and aimed towards teen girls that originally aired on ABC Family, was not a show that I at all expected to be filled to the brim with horror film references when I began watching it with my partner. In hindsight maybe I should have been more ready. The show (and presumably the books on which it is based) could easily be fan fiction of I Know What You Did Last Summer. It follows a group of high school girls who, after the disappearance and later confirmed death of their friend, begin receiving messages from an unknown antagonist known only as “A” who seems to know all of their potentially dangerous secrets. As in many classic slashers, these “high schoolers” are overwhelmingly played by 20 somethings.

But beyond the premise and casting, the show’s knowledge and love for horror film is on display in nearly every episode. Throughout the show there is significant use of killer POV, a staple of the slasher genre, and more specifically use of this technique to show what the killer is doing with their black gloved hands. These black gloves are an iconic part of the Italian giallo genre that precedes the American slasher boom of the late 70s and 80s by at least a decade. One of the first of these giallo films was Blood and Black Lace which like PLL focuses in part on the diary of a dead girl and characters’ desperate attempts to retrieve or destroy the diary.

Along with this broad reference to the tropes of a classic horror subgenre, there are three major instances of the show mimicking specific shots and sequences from iconic horror films. The first (that I noticed) and my favorite (thus far) comes in season 2’s Halloween episode titled “The First Secret.” The episode is a flashback that follows the group of girls as they prepare for and attend a Halloween party. Throughout the episode, they spot a person in a burlap sack outfit with a frightening doll mask standing ominously in the near distance. These static shots of a person in a mask looming threateningly are key to the horror of the original Halloween. And if there were any doubt that the visual homage was purposeful, the fact that the episode’s score is a riff on the style of the Halloween score makes it clear.

The second direct reference is even clearer and is used in a fascinating way. In the season 2 finale, the girls discover a motel operated by a young man who has an interest in taxidermy birds, just like Norman Bates from Psycho. There are shots in the episode that frame the young motel operator Harold, played by Travis Richey, in the same way that Hitchcock frames Anthony Perkins as Norman in Psycho. These shots are a fun reference, but in a later sequence the show goes even further to use the cultural knowledge and the expectations built on the iconic shower scene to create a great sense of unease in the audience. Like the framing of Harold, this later sequence perfectly mirrors the shots of the shower scene from Psycho as Hanna (Ashley Benson), one of the main four, cleans off in a shower at the motel. Because the sequence mirrors the original so perfectly it creates an expectation that the murder will play out the way it does in the original. So when Hanna isn’t attacked, while we’re relieved, we also feel a lingering sense of dread because something was supposed to happen and didn’t. This subversion of expectations for the purpose of unsettling the audience highlights that beyond just loving classic horror, the writers and directors of the show know how to make great horror set pieces and get under an audience’s skin on their own.

The third (again thus far) visual quoting is more in line with the first, it doesn’t subvert expectations and simply pays homage to a classic. In the third season of the show a mysterious person begins appearing and disappearing from the girls’ sight. The figure, dressed in a deep red coat with a hood that hides their face, is often seen in the distance at first glance but gone after closer inspection. This character, referred to rather un-creatively as “red coat,” brings to mind the mysterious figure that Donald Sutherland sees across Venice in Nicolas Roeg’s Don’t Look Now. Again like with Blood and Black Lace, this is more than just visual quoting, as in both Don’t Look Now and PLL the figure in the red coat is suspected to be a somehow still living girl who we believe has died.

These homages to classic horror, particularly the fantastic use of subversion to create greater discomfort in the second season’s finale, convinced me that the creators of the show know and love horror cinema. And those are just the major sequences that build on the visual language of classic horror films. There are references direct and indirect throughout the show. One of the girls goes on a first date to see Jacques Tourneur’s 1943 I Walked with a Zombie and later receives a shirt with the poster for the film. At the end of season two, the show introduces Radley Sanitarium which then plays a large role in season three. A sanitarium where troubled young people stay to combat their demons makes me think of the psychiatric hospital from A Nightmare on Elm Street 3: Dream Warriors and the fact that not all the doctors who work there seem to be trustworthy brings to mind Hellbound: Hellraiser II.

At some point I began to question whether I was so actively looking for references that I might be seeing things that weren’t purposefully there, especially as the references got more obscure. In particular, I doubted that the human sized puppets for a play of Faust at a carnival were a purposeful reference to Czech stop-motion animator Jan Švankmajer’s Faust film which has a number of life-sized and larger-than-life-sized puppets.

But a few episodes later a pet bird was introduced and it was named Tippi, like Tippi Hedren of The Birds, and I realized that everything in the show that might be a reference must be a reference. The creators are incredibly horror cinema literate and they clearly want to share that love with others through the show, whether it be by recreating sequences and images or a quick shot of a giant puppet.