Off the Beaten Path | Other Space S1E5 – Trouble’s Brewing 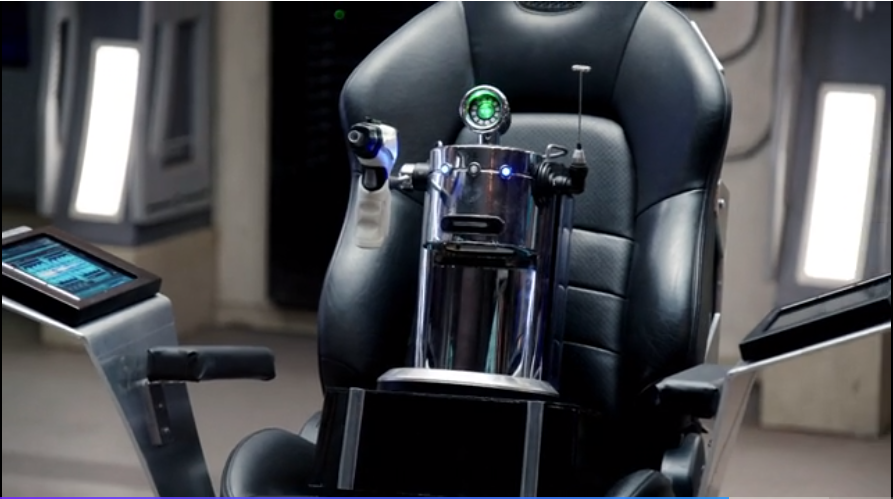 Ok, so I think it’s safe to say Trouble’s Brewing is my current favorite episode of Other Space. Granted, I think it helped that the B-Plot involving Tina and Michael (I’ll get into it later) was one of the few things I remembered from my initial watch way back when. So when I watched it the other day, I had one thought. Namely, I thought “wow, this is a true example of the heights Other Space can reach”. I thought this because honestly, Trouble’s Brewing has everything going for it.

Trouble’s Brewing starts with Stewart and Karen getting into a fresh argument. Stewart desperately wants to explore the surface of the new planet, while Karen points out it’s against UMP regulation for the two highest-ranking officers to first set foot on an unexplored planet. Instead, Michael and Tina prep for the surface trip to collect samples and retrieve the extracted fuel, both unenthusiastic about working with the other. While arguing about how decisions are made between the two, Stewart breaks a coffee-making robot, and they decide on a new, streamlined system for making decisions. Namely, they don’t have to confer with the other before making a decision.

Things start going awry almost immediately. Kent and Natasha, feeling overworked and under-appreciated for their work maintaining the ship and creating a universe portal detection system, ask Karen for full human privileges, and are promptly denied. Meanwhile, Zalian asks for a bonus (based on a note he wrote on an old donut box), which Stewart gives him just to placate him, and Zalian promptly retires. The tensions build to a full-on robot revolution, led by a now psychotic and vengeful coffee-maker bot.

While this whole revolution is going on, Tina and Michael find that time flows faster on the surface of the planet. This means that while the crew on the Cruiser will only experience six hours’ worth of time, Tina and Michael will experience roughly eight months’ worth of time. During their stay on the planet surface, Tina and Michael bond, bonding through shared boredom, eventually starting a relationship and building a life for each other. Their stay is extended though due to the robot revolution, and they eventually go mad from the isolation.

Alright, so I think Trouble’s Brewing is the best episode of Other Space. Even though I’m not 100% sure of this, I’m fairly certain this was also the case back when I first watched Other Space. I mean, as I said in my intro, the B-plot was one of the few concrete things I remembered about the show over the years. Granted, part of that was how scientifically ass-backward it was. Namely, time dilation due to a gravity well like a planet causes time to slow relative to an observer the closer to the gravity well they are aka Tina and Michael should have experienced only 6 hours of subjective time while the people on the Cruiser would experience months of their subjective time (look at Interstellar for something more accurate). But enough about that scientific explanation for a show that has made no effort to be accurate; going into this rewatch, Trouble’s Brewing was the episode I was looking forward to the most, and man it did not disappoint.

My main reason for liking Trouble’s Brewing from a plot perspective is that unlike other episodes, there wasn’t a weak plot. Since I’ve started reviewing shows for Off the Beaten Path, I’ve come to realize something when it comes to episodic plot structure. Namely, I prefer it when the various plots within an episode are either thematically tied or spring from a central event and get tied by the end. Not to say an episode with various unrelated plots can do well – I’m watching the What We Do In The Shadows show as I’m writing this review, and many of the episodes that feature Colin Robinson plots don’t tie to the greater narrative – but those stories have to put in extra work to justify their existence. In the case of comedy shows, the unrelated plots have to justify themselves by being as funny, if not funnier, than the main narrative.

So far with Other Space, the episodes have fallen into the trap I just described. I’ve found the plots to be weaker because they either are humorous or plot-based, but rarely both. A prime example of this in action is in The Death of A.R.T.; the A-plot involving the exterior repair crew has some good plot elements, but not much in the way of humor, while the B-plot involving the welcome message doesn’t do much but has almost all the humor. Trouble’s Brewing avoids this.

The A-plot, involving the robot (and Kent) mutiny aboard the Cruiser drives the narrative of the episode and directly impacts the planetary expedition B-plot. Normally, this plot would have at most a laugh or two, but not much else. Instead, this plot is just full to the brim with imaginative laughs and fun setups. I mean, how can you not be at the very least amused by the robot mutiny being co-opted by a bloodthirsty machine with a pension for petty vengeance against his former human oppressors?

What sets these plots apart though, both for the A-plot on the ship and the B-plot on the planet surface, especially compared to the previous episodes of Other Space, is how great these plots are at showcasing the characters in interesting ways. I mean, consider the B-plot. On paper, Tina and Michael waiting on a barren planet with nothing to do would for 8 months sound super boring, especially after the first 3 episodes.

What Feig and Ben Smith – the credited writer for Trouble’s Brewing – do here though is something I find incredible. They managed to not only create a wild narrative arc laden with emotionally effective humor but do it with Tina and Michael, some of the most undeveloped characters so far. During their few scenes that intersperse the episode, these two display on-screen chemistry which took till now for me to notice was truly missing. It was watching the performances of Cordero and Vayntrub that I truly thought for the first time “man, just how great could these characters get after a full 23 episode season?”. That question right there was what cemented Trouble’s Brewing as my favorite episode of Other Space.

That’s not to say others didn’t shine. Far from it in fact. Aboard the Cruiser, everyone is either challenged on a personal level and/or meaningfully adds to the narrative in some way (the sole exception is A.R.T., who’s largely just an instigator). For example, the whole robot revolution is started because Stewart and Karen decided to update how decisions were made between them to avoid clashes about decision making, which started failing almost immediately. It not only brought back the Stewart-Karen dynamic that was the best part about Into the Great Beyond…Beyond, but it gave them more to do, especially Stewart.

I mean, so far Stewart has just been an overly nonconfrontational people pleaser ala Michael Scott from The Office. Here he shows some stronger emotions aka anything more than optimistic awkwardness, like when he broke the coffee machine in anger that would later usurp him. Not only that, but the narrative shows how his people-pleasing, which hasn’t been all that challenged so far, is a piss poor management style. In all, it makes Stewart more interesting.

One last thing character I want to mention so far is the coffee maker bot. Out of all the single episode guest characters (I’m excluding the alien at the end since it’s being built up to something), the coffee maker bot is easily the best one so far. Sure, the Matthew McConaughey quoting alien was amusing, but this bloodthirsty coffee maker was hilarious, and I’m not even bringing my telepathic alien beef into this. This coffee bot was just a straight-up creative villain that always made me laugh, and hopefully won’t be the last.

So it goes without saying that I consider Trouble’s Brewing to be peak Other Space. It takes everything that is good from the first 4 episodes and combines them into an episode of television that’s as emotionally provoking as it is funny. On top of that, Trouble’s Brewing is the kind of first season episode that shows that, despite some weak first episodes, Other Space had the potential to be a true long-running series that only gets better with time. We’ll just have to see if the final stretch of Other Space episodes can reach the heights displayed here.