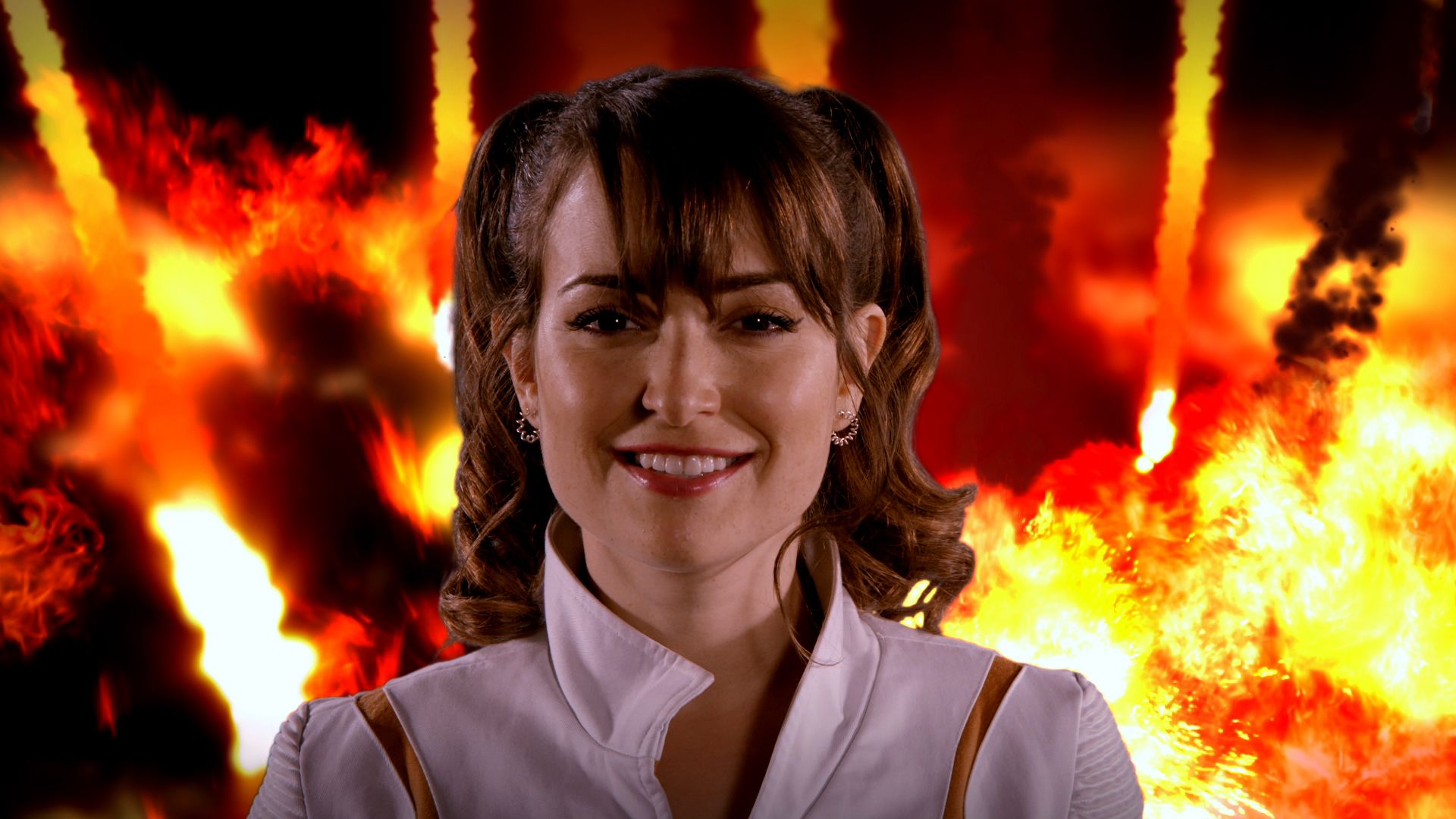 Alright, we’re three episodes into Other Space, there’s nary an alien intruder in sight. Instead, we get some welcome buildup for future episodes based on another famous Star Trek story (I’ll dive into that later), and more of that patented Feig-inspired humor. Why then do I still feel lukewarm to The Death of A.R.T.? Granted, this isn’t all that surprising; many a new comedy show is rather shaky in its first season, and even a couple classics (I mean, who watches season one of Parks & Recreation and Seinfeld?). So what exactly is working for me and what isn’t?

The Death of A.R.T. starts with the crew flying through a dense nebula, completely lost and bored out of their minds. During a boredom-induced snark fest, the crew realizes there’s something up with the Cruiser’s shields, which turns out to be A.R.T.’s fault. Now with something to do, the crew splits up; Karen, Michael, A.R.T., and Zalian prepare A.R.T. for a spacewalk to fix the ansible (aka an antenna) he damaged, while Stewart, Kent, and Tina work on a greeting video on behalf of humanity.

The job to repair the ansible quickly goes off the rails when A.R.T., goofing off with his light, manages to get himself stuck. Things get even worse when Karen and Michael go out to retrieve him but ends with Karen kicking A.R.T. out into space after a joke gone wrong. Devastated, Karen struggles to keep herself together, especially when talking to Zalian.

Meanwhile, the group creating the welcome message struggle with coming up with the tone of the message; Kent wants to make a video that essentially begs for mercy by way of emotional and sexual subservience, while Tina wants to make a hyper-aggressive message to intimidate everyone. At an impasse (and to not get on Tina’s bad side), Stewart allows each of them to make their own videos, which end up exactly how you’d think they would.

When the crew watches the different welcome videos, a grief-stricken Karen confesses to dooming A.R.T., and when Zalian goes out to find him, the crew makes a startling discovery; the nebula is rapidly collapsing into a planet and the UMP Cruiser is going to be the planetary core. The crew must then work together, along with a hopelessly drifting A.R.T., to escape the nebula before they get crushed.

So what exactly does The Death of A.R.T. have going for it? Well, the big thing I liked about this episode was the little character bits that, while simple throwaway jokes, reveal greater aspects of the characters. The character that benefits the most from this is Natasha, who’s now up there with Kent and Karen as my favorite characters.

One of my biggest laughs in the episode was not when Natasha is just a snark machine at the beginning, but afterward when she tries to be snarky after “snark mode” is turned off because she misses her snarkiness. It’s a simple joke, but it gives Natasha, an A.I. designed to be a blackjack dealer, more dimension than many of the characters that occupy 4-dimensional space.

It’s also this kind of humor that kept me interested in the message B-Plot, which was otherwise pretty thin. I mean, how can you not laugh as Tina mouths silently along with her video, which is chockfull of explosions, death metal, and a heavily armed A.R.T.? In that same vein, how can you not laugh as Kent tries to be seductive, and immediately attempts to strip down whenever he thinks an intruder might arrive? They may not be up there with Natasha, since they don’t reveal a whole lot of new information about Tina and Kent respectively, but they’re full of solid jokes all around.

The one character that truly stood out to me this episode though was Karen. While the other characters just kind of mill around, being punchlines and making light of their situation, Karen gets stuff to do on an emotional level, and she goes through the wringer this episode. From being her usual curt and confident self to an emotional wreck for essentially killing one of the crew to back to angry (I’ll get to that bit later), she has an entire arc that none of the others even comes close to. It just reinforces my belief that out of the Lipinski siblings, she’s the more interesting one (and that won’t change until Stewart stops trying to coddle his crew and faces a true emotional crisis).

For a positive that doesn’t have to deal with the characters, I’m happy that The Death of A.R.T. moved away from the alien intruder rut they’ve found themselves in. What’s more, this planet formation (a reference to Star Trek II: The Wrath of Khan and the genesis device), while it happens a bit later in the plot than I’d like, is a good set-up for future episode plots. Let me put it this way; there’s more that can be done involving this planet (especially now they’re bereft of fuel), than another telepathic alien.

All that said, there was stuff about The Death of A.R.T. that I wasn’t all that crazy about. The biggest thing that irked me was the conclusion of the A-plot. Essentially, A.R.T. sacrificed himself by attracting the collapsing nebula around himself, becoming a planetary core while the Cruiser manages to escape. This is all fine and dandy, until Zalian boots up a new A.R.T., while also informing the crew that not only is A.R.T.’s memory always backed up on the ship’s computer but that there are at least 10 more A.R.T.s onboard the ship.

Look, I understand the need to maintain the status quo in a sitcom; Trace Beaulieu is credited as a main cast member, so he’s more or less guaranteed to come back in some form. That said, his return just feels like an ass-pull that largely renders Karen’s whole arc this episode pointless. Honestly, this wouldn’t have been so bad if Zalian hadn’t acted all grief-struck this episode, or given a better explanation for his behavior earlier. Instead, we just get this. God, I truly understand Karen’s anger here; going through some emotional whiplash only to find out it was for nothing.

Like I mentioned above as well, I also feel like the collapsing nebula could have been set-up more effectively. The fact it only came up in the third act just feels like a cheap way to create a dramatic climax. If anything, this should have been the focus of the B-plot, or just given more presence and foreshadowing at the very least. Hell, even a mention of the growing atmosphere or the increasing density of the cloud would have sufficed.

One last thing I’d like to mention is the budget. While I can’t fault Feig and his crew for only getting a minuscule budget from Yahoo! Screen, The Death of A.R.T. is the episode so far that has suffered the most from a lack of budget. From Tina’s outline that clearly marks a green screen in the first scene, to the set used for the exterior hull-shots, poorly lit to hide the fact that it’s a set, to the costumes used for the spacewalks, this episode just feels low budget. Again, I won’t fault the crew for getting a small budget to work with, I just think they could have used it more effectively so that we don’t start thinking “man, this looks cheap” while we’re watching it.

So, what do I think of The Death of A.R.T.? I’ll say this much; it’s at least better than Getting to Know You. Sure, the episode is more cohesive and the character laughs keeps on rolling. That said, there were just some plot elements that struck me in the worst way, bringing this episode down a few pegs.

If it seems like I’m overly harsh, it’s because, between this and Danger 5, Danger 5 proves that a sitcom can knock it out of the park right away, while Other Space just keeps making dumb mistakes. Hopefully, Other Space finds its footing soon, especially since the next episode marks the halfway point of the show.