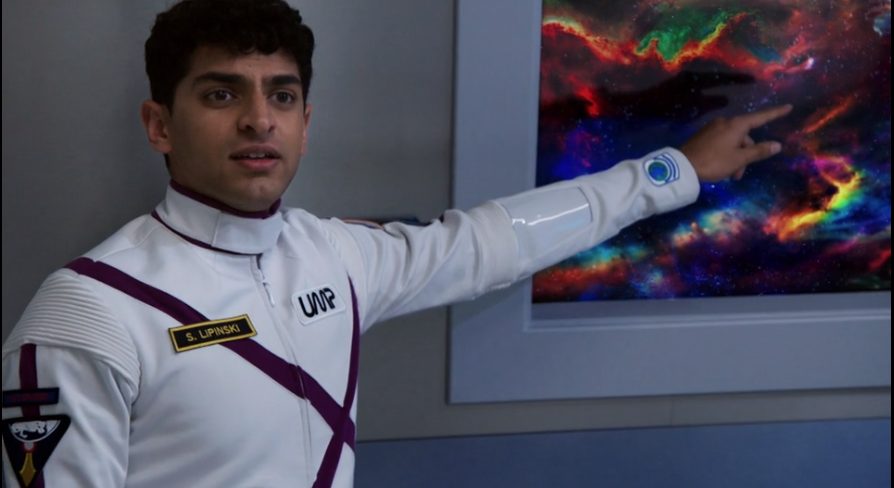 A new series, a new pilot episode to review. I don’t know about you but after the sheer intensity of Utopia, it’s time to go back to some lighter comedy fare for Off the Beaten Path. Safe to say, there’s not much more of a hidden offering than Other Space, even more so than Danger 5. So to kick us off into the realms of space we have episode one aka Into the Great Beyond…Beyond. Now my question is, does Other Space explore the unknown better than Star Trek: Voyager, or does it crash and burn upon launch?

Into the Great Beyond…Beyond starts with Stewart treating his crew to some hotdogs while performing a Kobayashi-Maru style test (if you don’t know what this, do yourself a favor and watch Star Trek II: The Wrath of Khan). Using some quick thinking that is both innovative yet hilariously awkward and mundane, Stewart manages to pass the unpassable test. Based on his success – and a PR push – the UMP gives Stewart command of the UMP Cruiser, the flagship of the fleet, with his older sister Karen as his first in command.

The Cruiser launches it’s maiden voyage, with the crew largely apathetic to Stewart and their mission at best. It’s during this initial launch Stewart (and us by proxy), meet the six other crew members. To help raise morale, Stewart makes the crew dinner, but they find it’s spoiled beyond their wildest imaginations, along with the rest of their food stores. Before they can turn back though, they encounter a wormhole, which traps them in an alternate universe.

Almost immediately after they get what bearings they can, Karen launches a mutiny against Stewart with little protest from the crew. It’s at this point UMP high command arrives, proclaiming everything was a test for Karen. Stewart quickly sees through what turns out to be an illusion generated by some alien intelligence and saves the crew before Karen can inadvertently kill them all. From there, they all recollect themselves, and with Stewart back at the helm, they decide to explore this new universe.

I think first and foremost, Into the Great Beyond…Beyond has to do one job; make itself as distinct a Star Trek-clone it can be while still being a Star Trek-clone. Listening to the great tv review podcast Cancelled Too Soon – check it out, it’s an awesome podcast, and what inspired me to start Off the Beaten Path in the first place – you learn that there are a bunch of Star Trek clones and spoofs that litter the ash heap that is TV history. The vast majority of these shows fail because they’re too cheap to be entertaining from a production standpoint and/or they’re too creatively sterile and bland. Seeing how cheap Other Space looks and feels (I mean, could they not afford any more cast members for a crew?), Into the Great Beyond…Beyond has to compensate by avoiding the bland/sterile trap to succeed as a show.

On the surface, Other Space falls into this trap. I mean, Into the Great Beyond…Beyond definitely wears it’s Star Trek influence on its jumpsuit sleeve. As I’ve mentioned repeatedly, the premise of the show is essentially a comedic Star Trek: Voyager, and there are a bunch of other Star Trek tropes and story beats thrown about, like the Kobayashi-Maru test at the beginning, and I say this as someone who hasn’t seen a ton of Star Trek (I’ve watched all the movies, along with a smattering of episodes from both the original series and TNG). Luckily for Other Space, it has Paul Feig at the helm to avoid this creativity trap.

Despite the story beats clearly following Star Trek’s lead, Fieg immediately gives Other Space a strong sense of identity by injecting some sheer goofiness, from the opening crawl about the establishment of the UMP after the war between the U.S. and Switzerland, to the characters. Right away during his establishing Kobayashi-Maru scene, we see that Stewart is essentially the anti-Kirk; he’s unabashedly geeky, he’s hopelessly in love with a woman (aka Tina) who barely knows he exists, and he’s such a doormat Karen can launch a successful mutiny without any resistance.

Feig also populates the UMP Cruiser with an assortment of wildly wacky and, most importantly, inept crew members, half of which were hired through nepotism or legacy. It’s through this Feig-style sheer wackiness and ineptitude that Other Space differentiates itself from other Star Trek spoofs like The Orville. Sure, these characters are fairly thin character-wise so far, especially when you compare Other Space to many genre spoofs out there. That said, I expect they’ll be fleshed out over time, so I’ll give Into the Great Beyond…Beyond a pass here.

One thing I think Into the Great Beyond…Beyond does well is it establishes a dramatic and emotional backbone through the relationship between Stewart and Karen. Over the two simulation scenes that bookend the episode, we see how Stewart and Karen differ when it comes to command, which informs both their characters and establishes how they’re foils for each other. Namely, there’s Stewart’s lackadaisical yet weirdly effective style shown in the beginning compared to Karen’s hard-edged nature complimented by her nearly blinding ambition shown in the alien simulation.

What makes these scenes though is the scene where Karen visits Stewart’s quarters to apologize. Here we see how despite their rivalry and clashing personalities, they do care for each other. Plus, it outlines how each other has influenced the emotional development of the other. I mean, how can you not feel for Karen when she tells him how she feels marginalized all the time because he constantly half-asses his way to success compared to her hard work? It’s a strong scene that moves Into the Great Beyond…Beyond from a fun yet standard pilot episode to something better. Even better, this sets the stage for inevitable clashes of leadership down the line, even if Karen now admits Stewart is the better captain and has his back for better or worse.

If there’s anything I’d offer as a critique for Into the Great Beyond…Beyond, it’s that like I Danced for Hitler! with Danger 5, this pilot feels fairly safe. Like I’ve harped on above, this episode takes most of its plot points from various Star Trek properties. If you were to take away Feig’s dialogue and the characters, this would be a cookie-cutter as hell Star Trek knockoff. Hopefully, this is something Other Space avoids going forward now that the premise and characters have been established.

Also like I mentioned above, this is a very cheap looking show (I’m wondering how much money Yahoo! Screen put into the season). I mean, consider the UMP Cruiser, the flagship vessel of the UMP is crewed by only 8 people. Also consider that A.R.T. (and his voice actor Trace Beaulieu) looks like they wandered onto the set from MST3K with Zalian (fun note, both Joel Hodgson, who plays Zalian, and Beaulieu are MST3K alumni). While this may not be a huge deal for a show dealing with, say, 20-somethings hanging out in the big city, for a show that necessitates special effects and specially made set design, this can be hobbling. I’ll be interested to see how they work around this going forward since a lack of financial support can truly fuel creativity.

So, with all that said, I liked Into the Great Beyond…Beyond. As a pilot episode, it had to establish a solid tone while differentiating itself from the scores of Star Trek clones and spoofs that dot the cultural landscape, and for the most part, I think the episode does this well. I mean, it’s a solid lo-fi sci-fi show that generates some great laughs. I’ll be interested to see if the next episode can build on the world of Other Space established here.