Off the Beaten Path | Other Space S1E2 – Getting To Know You 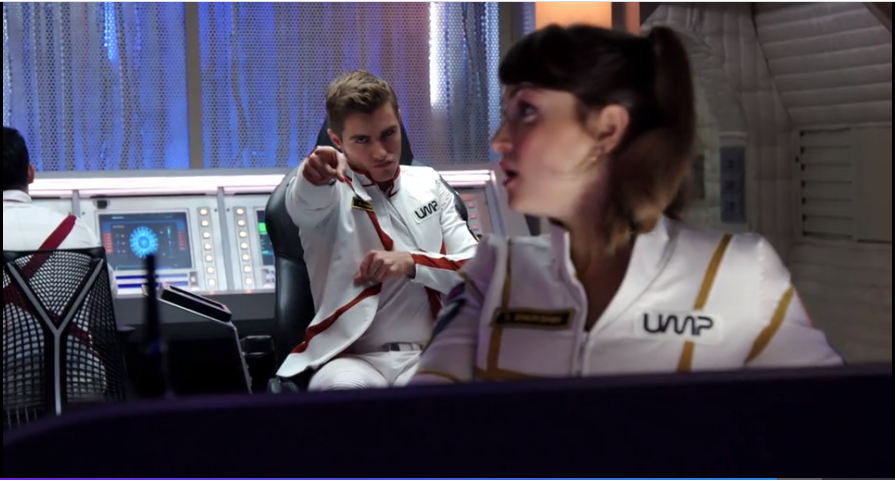 With Into the Great Beyond…Beyond, we were introduced to the familiar premise of Other Space, along with the main duo of Stewart and Karen. It should come as no surprise then that in the second episode of Other Space, fittingly called Getting to Know You, we start to learn about the rest of the crew. My question is, how well do we get to know our intrepid cast and crew in Getting to Know You?

Getting to Know You starts with the crew, now joined by Chad (played by Dave Franco) from auxiliary deck, the cool man who slept through the whole wormhole situation. They discuss the pressing issues they’re with various levels of forced enthusiasm; not only are they stuck in an uncharted universe, but they also have no idea what kind of intelligence infiltrated the ship yesterday, the only food they have is fudge (which will only last them a few weeks), general issues with the ship, etc.

To help build morale, Stewart starts what’s essentially a group therapy session for everyone to talk about their feelings, which turns into a game of mafia after some of the crew talk about themselves and their pass. Meanwhile, Karen and a reticent Michael are running a diagnostic sweep of the ship, which leads to an awful realization; another alien is hiding on the ship, disguised as one of the crew. They bring the news to the rest of the crew, and the game of mafia turns serious.

After much discussion during the game, and after more secrets about the crew are brought out into the open, everyone but Stewart decides that the alien is Kent. They take him to the airlock, but while there Karen deduces that Chad is the alien, and both she and Stewart are put into the airlock with Kent. Once they realize how Chad has been fooling the crew, Stewart, Karen, and Kent must then team up to escape the airlock and get rid of Chad, who has been made captain by popular demand.

I’m not gonna lie, Getting to Know You has me conflicted. The central idea of the episode aka “the crew gets to know each other better when a game of mafia turns serious”, just sounds like a fun idea. It’s an idea the not only moves Other Space away from pure Star Trek homage into its own thing but also innately allows us to get to know our cast of characters. It’s a good idea, at least, on paper. What we got is a mixed bag, that can determine whether you think this episode is good or bad depending on whether you prefer character humor or story humor in a workplace comedy.

I’ll start with the things I liked. The big thing for me was that Getting to Know You does indeed allow us to get to know our intrepid heroes, and mines the best laughs and drama out of it. While we didn’t learn too much more about Zalian, Michael, and Tina, we get some great bits from Natasha, A.R.T., and Kent. I mean, how can you not laugh at the throwaway joke that there’s not only a Hooters Casino Space Shuttle but that Natasha was originally programmed to be a blackjack dealer at said shuttle? Or that A.R.T. is the mind of multi-billionaire tech inventor Howard Barnes trapped in a machine that looks like it’s made of garbage?

On a more dramatic note, the character we get to know the most was Kent. In Into the Great Beyond…Beyond, we only learn that Kent is socially awkward to a fault and has a deep (a bit too deep) of love for his mother. Here, we learn about his rather bizarre upbringing as a comatose organ farm for his older brother, and how he has only been awake for a few months.

After the first episode, I felt that Kent was rather shallow, merely a punchline of a character who’s one defining feature was his social awkwardness. In this episode, Kent not only becomes a much more humanized character despite his somewhat non-human aspects (the gills reveal got a laugh out of me), but he saves the day once he pinpoints exactly how Chad is manipulating the crew through sheer coolness. It makes me more invested in Kent than characters like Tina and Michael who are more repeating punchlines (funny punchlines, but punchlines nonetheless) than fully realized characters. I’d go so far to say he’s my current favorite character along with Karen (I find her the more interesting and dynamic of the Lipinski siblings).

As for the stuff I don’t like, I just don’t like the story all that much. If I had to boil my biggest story complaint down into a succinct thought, it would be this; for some reason, Getting to Know You, despite being only the second episode of an eight-episode show, decides to retread the same ideas from Into the Great Beyond…Beyond instead of exploring new stuff. I mean, both episodes involve an alien invader on the ship that uses positive mental manipulation to gain control of the ship.

The thing that gets under my skin though was that Getting to Know You had a perfectly good setup with the food shortage and the existential malaise that has gripped the crew. Not only that, but they solve this food situation largely off-camera at the end, solving the crew’s largest issue. It just feels like a conclusion that doesn’t feel earned while undercutting the seriousness of the situation the crew found themselves in.

The other story complaint I have is about the whole Chad reveal. Don’t get me wrong, the Chad reveal is a perfectly on-brand sci-fi joke. Namely, he’s so cool because he’s a literal McConaughey quote-machine that has implanted McConaughey inspired good memories into the minds of everyone on the crew. Outside of Natasha’s past, it was my biggest laugh of the episode.

My big issue with the whole thing was that it was pretty obvious Chad was the alien the whole time, even before the reveal. I mean, the way Franco was introduced at the end of Into the Great Beyond…Beyond and how everyone loves him unabashedly makes it pretty obvious he’s the alien. To be perfectly honest, it probably didn’t help that this cameo and the reveal was one of the few things I remembered from my first watch, but the way Franco’s character is treated makes it almost as good as an inevitable.

So to wrap up my thoughts on Getting to Know You, I’m rather conflicted. On one hand, the episode has a good amount of character laughs and development and makes progress to become its own thing. On the other hand, the story is surprisingly lackluster, abandoning a good premise in favor of retread ground while undercutting its own reveal. Like I said earlier, Getting to Know You lives or dies on whether you’re more drawn to character humor or story humor. Here’s to hoping future episodes branch out and take more narrative risks.