Off the Beaten Path | Other Space S1E7 – First Contact 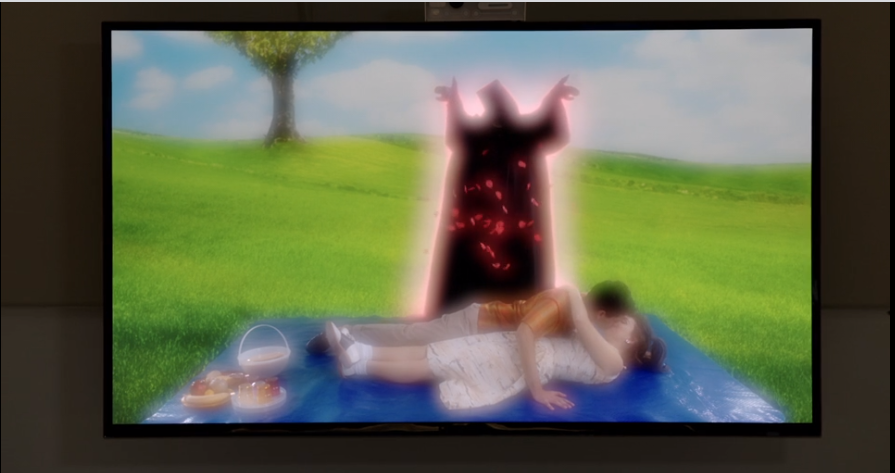 Ok, First Contact is, to me, a significant backslide for Other Space. After three of the strongest episodes of the show, we’re back to the lows of Getting to Know You and The Death of A.R.T., which I find low key heartbreaking. In a way, First Contact is stuck in a weird duality. Somehow the two main plots both bite off more than they can chew, and don’t go far enough respectively. It’s a truly odd narrative situation.

First Contact starts shortly after Powerless. Natasha explains to the crew that in 72 hours a wormhole will open nearby them, allowing them to go home. Everyone is ecstatic. Everyone that is, except for Stewart. Stewart, while happy for his crew, wishes they could at the very least being back something more than dirt and rocks for all their troubles. It comes as no surprise then that later that night, Stewart gathers the crew, claiming he had made first contact with an alien being through his dreams. Defying their orders to watch Stewart’s dream on their dream casting machine, the crew largely goes off and does their own things.

The rest of the crew deals with their own relationship drama. Kent and Natasha deal with the knowledge that their time together is limited, and try to find ways to say together after they get back to Earth. Karen, finding evidence from Tina and Michael’s relationship, loses her shit and strikes Michael. Michael files a complaint, and the two are stuck in HR arbitration with Tina as the unobjective arbiter. With her job at stake, Karen must work to either finagle a solution or just apologize to Michael for her behavior.

Man, as I said back in my intro, First Contact is a weird episode of dualities, and not in a good way. On the one hand, First Contact doesn’t go far enough exploring a potentially interesting plotline aka the A-plot about Stewart and A.R.T. as they seek to make “first contact” (I’ll dive into this bit later as well). On the other hand, First Contact bites off more than it can chew on the dramatic front, tackling a serious subject in the B-plot I’m not convinced it was ready to tackle.

The A-plot about finding the alien plot-line just feels like wasted potential. The idea – an alien that can only make mental contact during sex dreams – is amusing enough. It just doesn’t feel like they pushed the envelope of what’s possible in sci-fi.

Personally, I’d want to see Stewart explore these dreams more ala Inception. One possibility is that in the dream itself he’s forced into a dilemma; either stay with his dream Tina or find the alien. You don’t even need a big budget for this. For instance, the dreams could stay aboard the ship aka their pre-existing sets. Instead, we just get commentary from A.R.T. while watching Stewart’s stereotypically 70’s porn-esque dreams. Side note, I just couldn’t get over how Stewart dreams in the third person, almost as if he’s starring in a TV show. If you’re curious what this looks like, the article image is from the last of these dreams.

I also want to mention A.R.T.’s role here. Watching First Contact, it occurred to me that A.R.T. has been written as the truest knock off of Pierce Hawthorne from Community. With this in mind, I don’t think A.R.T. was used in a way that either challenges him as a character (in the Hawthorne sense, being the rich chaotic evil friend) or gives him some true laughs. Other than the one selfless act we’ve seen in all of Other Space – him disposing of the rest of lammies to save Stewart from himself – he doesn’t do much other than commentating in typical A.R.T. fashion. If he’s gonna be the Pierce Hawthorne, give him Hawthorne shit to do, but it just feels like Feig is half-assing it with him. It’s a far cry from Zalian’s and Stewart’s plotline in Powerless.

On a smaller note (but one you’re probably expecting if you been following along with my reviews), do we need yet another episode about an alien using telepathy for either contact and/or manipulation? In the three episodes that deal with alien life forms – out of seven episodes total, I might add – every, single, fucking, one, has dealt with an alien life form that uses telepathy.

Like honestly, isn’t there some other way they could have this alien, clearly important based on its appearances in Ted Talks and Trouble’s Brewing, make initial contact? Seriously Feig, Matteo Borghese, and Rob Turvosky – the credited writers on First Contact – isn’t there some other way of having an alien make contact with the Cruiser? What about a distress beacon? A similar welcome video from The Death of A.R.T.? I’m just spitballing here, but you get the point.

On the flip side of this odd coin is the B-plot featuring Karen, Michael, and Tina. As I said earlier, while I think Stewart’s plot doesn’t do enough with the premise, this plot-line is too much for Other Space to effectively tackle. I mean, a story that deals with what’s essentially a domestic abuse situation that spills into the workplace is, how best to put it, one hell of a gamble, especially for a comedy. Safe to say, I don’t think First Contact pulls this off.

For one, the ending of this – Michael withdrawing the complaint he submitted – just feels like a cop-out. Look, Karen struck an inferior officer twice, and she doesn’t face any lasting consequences for her actions. Even with her tearful apology/non-apology to Michael near the end (the one saving grace of this whole plotline for me), she should have faced the proverbial music. Let me put it this way; if the gender roles were reversed, would a simple apology at the end suffice? Hell no!

For another, while Tina is an entertaining arbiter on paper, in practice I don’t think it works out well. Namely, her being so incredibly biased against Karen, to me at least, makes it feel like the writers aren’t taking this whole situation seriously. Sure, it was fun to see Tina acting competently if only to spite Karen. That said, the fact that Karen has a point about the bias, which just stacks the deck against her, makes it feel like we’re supposed to take Karen’s side the whole time, which just rubs me the wrong way.

Lastly, while this ordeal has fueled my growing respect for Michael – as the ship’s proverbial whipping boy, it’s good to see him stand up for himself – it has darkly colored my opinions of Karen. Before, she was just the hard-assed straight man who comedically shined most when in a position of authority, whether real or imagined. After First Contact, I just don’t know.

I mean, her whole goal for most of the episode is to weasel out of responsibility without even acknowledging that she did anything wrong. Hell, she tries to play the whole situation off like a sign of Italian affection to use UMP’s anti-racism guidelines to get her off the hook. Sure, she gives a pretty heartfelt apology at the end that nails her faults over not just the episode but the entire show, which would normally be emblematic of solid character growth. In this situation though, it’s just an ugly blemish, which is a shame since she has always been one of my favorite characters on Other Space.

If there’s one thing that keeps First Contact from being a total wash, it’s just how quotable this episode is. Because of this, the shining star of First Contact is Kent, who delivers the best lines of the episode, if not the whole show. Like, how can you not laugh at the delivery of “I can’t believe I’m explaining love to a Turing machine”, or “Kent, nipple belt, what are we talking about?”. Do it, I dare you.

So yeah, First Contact is one hell of a confusing ride, and not in a good way. On the Stewart side of things, it just feels lazy, with concepts and characters that aren’t utilized to their greatest potential. On the Karen side of things, it’s just a big ol’ swing and a miss, tackling some dramatic subject matter the show isn’t ready or mature enough to fully tackle. The only thing saving First Contact from being a truly bad episode is how amusingly quotable it can be. Here’s hoping that Finale, the series finale, ends on a higher note.