Off the Beaten Path | Other Space S1E8 – Finale 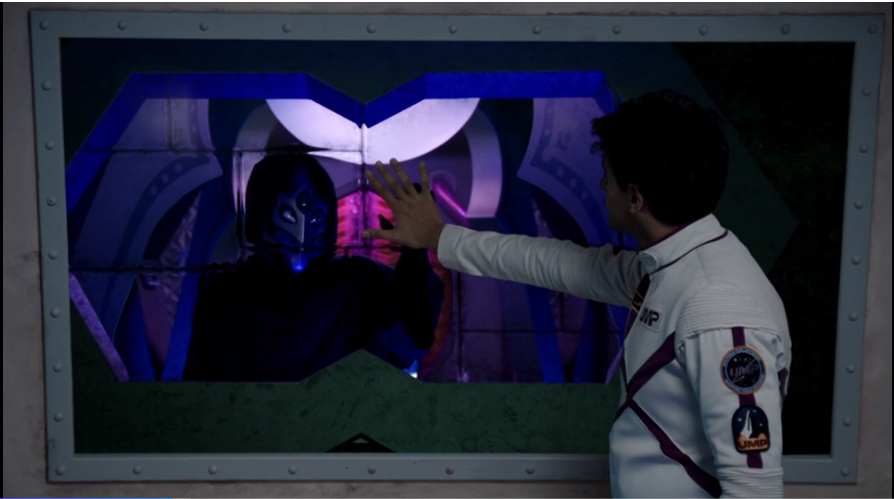 Ok, guys, this was quite the quick trip, but we’re already at the end of Other Space with the final episode, fittingly (prophetically maybe?) called Finale. Out of the 4 shows and now 6 seasons of television I’ve reviewed for you all on Off the Beaten Path, this is the second show that has ended in a cliffhanger.

Just a heads up, I’m not going to talk about whether the cliffhanger is itself good or bad; Feig and his crew had no say in the cancellation of Other Space, so I’m not going to hold now empty promises of future stories against them. Instead, I’ll judge Finale on the merits of being a finale. So, does Finale stick the landing? The answer to that is “kinda?”, and I’ll explain why.

Finale starts when the Cruiser arrives at the coordinates the alien gave them in First Contact, just hours before the wormhole is predicted to open. The welcome the alien on board, and after a lengthy welcome speech is ready to get down to the business of formalizing first contact. Just then, an alarm goes off; the wormhole is opening sooner than expected, and will open within the hour. The alarm scares away the alien, which returns to its ship before anything can truly be learned about it.

Stewart, Karen, and Michael remain on the bridge, quickly prepping the ship for the trip through the wormhole. Once that’s done, he makes a crucial decision; he’s going to stay with the alien to learn more about their culture. Adamant about following his dreams, he makes a distraught Karen captain and goes over to the alien ship with Michael, who decides to come along. Once onboard the ship though, they quickly regret their decision, as all it seems the alien likes to do is vomit and live in goo. They also make two startling discoveries; the ship has been filmed like a reality tv show and the alien is siphoning their fuel, making a return trip through the wormhole impossible. After returning to the Cruiser, they have to face the wrath of an incredibly emotional Karen.

Meanwhile, in the holodeck, Tina decides to help Kent and Natasha have at least one first date before Natasha’s memory is wiped upon return. Despite multiple attempts to get the date going, Kent just doesn’t seem interested. Later though, after Kent deduces the ship isn’t moving, he shows Natasha what he’s been working on; a device that allows him to become a digital entity and exist in the ship’s mainframe with her. Later, the whole crew must face the reality of not going through the wormhole, along with having the alien as a new hitchhiker.

Alright, first things first with Finale; despite not being written as a series finale, it, unfortunately, is because of the failure of Yahoo! Screen. As such, I can see a lot of people not wanting to watch Other Space at all because Finale ends on a cliffhanger that will never be addressed. Honestly, I wouldn’t blame them.

While Utopia at least had a chance to find its feet and tell a cohesive story, Other Space never fully found its feet before being canceled. That said, I’m not going to hold this cliffhanger ending against Other Space since it was canceled for reasons beyond its control. As such, I’m reviewing Finale on its own terms. So, as I said in my intro, Finale is a decent finale, but also doesn’t quite stick the landing for me.

I think the big thing Finale succeeds at is tying the whole season together. On the recent side of things, all the main romances are carried forward and given new heights. With Kent and Karen, Kent has figured out how they could be together in cyberspace. This to me is the development that finally justifies this whole romance arc between the two of them, even though it’s dominated their narratives since it was introduced back in Powerless.

Between Karen and Michael, Karen realizes that she not only wants to be with Michael but that she should have appreciated him more – by this point Michael had left with Stewart. While this is only the third time this romance narrative has popped up – it first showed up in Ted Talks and addressed in First Contact – it feels like season 2 would have examined not only this romance but Kent and Natasha’s further.

Speaking of something from Ted Talks, we got a return of the whole reality tv subplot. At first, it was just kinda predictable. Namely, the alien had been watching the feeds, and so Stewart found out about it on the alien’s ship (Michael already knew, but neglected to mention it to anybody).

This came to a head though near the end of the episode when the ship’s producer module created a trailer for season one of Spacin’ Out aka a trailer of the show about the exploits of the Cruiser, made up of shots from the season. While this felt like it was coming out of nowhere (I’ll address this in more depth in my wrap up post about Other Space as a whole), it was a welcome return of probably the most interesting element of this sci-fi series.

The most welcome return, and the thing that tied Finale back to Into the Great Beyond…Beyond, is the return of the Stewart-Karen dynamic. This, more than anything, was the beating heart of Finale, and the best aspect. Within the episode, it provided the most emotionally charged moments. There was Stewart and Karen’s heartfelt goodbye when Stewart decides to stay behind. Then the anger after Stewart and Michael return – side note, I’m glad Stewart stuck up for his decision, even if it turned out badly. Lastly, there’s the reconciliation between the two after the wormhole closes.

It’s not only a solid emotional arc in this episode, but also shows how far they’ve come since Into the Great Beyond…Beyond. It’s an interesting mirror. They end up in the same situation – Karen assumes control, but relinquishes it once she realizes Stewart saved them (though this is debatable in Finale) – the nature of how they start shows that the two have grown as not only siblings but as individuals, which I think is a great accomplishment despite some missteps.

So what do I mean by missteps? Well, back in my intro, I said that Finale only “kinda” stuck the landing. This is because there’s stuff here that doesn’t sit well with me, from being annoying to straight-up baffling. As I just mentioned, Karen saying Stewart saved them at the end is to me rather debatable, and it bugs me. Specifically, because the alien siphoned their fuel and tried to go through the wormhole, the alien ship got destroyed instead of the Cruiser.

The thing that bugs me here is that Stewart didn’t save them. It wasn’t like everything wen according to Stewart’s plan, it was just dumb luck. This just feels like Feig and Owen Ellickson (the credited writer of Finale) wanted to mirror Into the Great Beyond…Beyond when Stewart actually saved them, but the way they wrote it just doesn’t have the same dramatic impact.

For something that straight-up baffled me, I just don’t understand the whole fuel siphoning twist. After all the setup with the alien since Ted Talks up till now, this is an explanation that straight-up doesn’t make sense. I mean, this alien followed them across space, expending likely large amounts of fuel to get more fuel?

Wouldn’t it have made more sense for the alien to take the fuel earlier, like either from the planet itself – speaking of which, the energy expenditure of entering and exiting a planetary gravity well is much more than just moving through interstellar space, and we know the alien made a planetary landing – or from the ship jut after they got the fuel? This to me just seems like a low-key version of machines using humans as batteries in The Matrix, in that the energy put into getting more energy adds to a loss. While it’s an on-brand joke, it’s a joke that throws a wrench into the gears of the show on the slightest bit of examination.

Like previous episodes of Other Space, Finale has an issue with having a disparity between the main storylines. In this case, the secondary crew members throwing a first date for Kent and Natasha. While we get a nice conclusion out of it, it still just feels like fluff that could easily be trimmed down, especially since besides Kent and Natasha the other three don’t do anything appreciable. It’s a shame, especially since this is the storyline they go out on, but one I’ve gotten accustomed to over the season.

One last thing that brings Finale down is that after watching it, it casts a shadow on previous episodes. For something other than the alien bit (which also applies here), consider the reality tv show return. While it was a definite welcome addition, it got me thinking “where was this the whole time?”. I mean, it was introduced back in episode 4, and then it was just dropped. Not even a cursory mention or shot was around to remind us that it so much as existed, yet alone mattered. This is made even more egregious that not only Zalian and A.R.T. knew about it, but that Michael did the whole time. This makes its return jarring, which isn’t how we should react to this kind of thing in a narrative.

There’s more I can talk about – in particular about how stuff has been brought up out of nowhere then dropped, a general lack of sci-fi exploration on a conceptual level – but I’ll save those for my wrap up post. Mostly this is because they’re issues the show has on a whole, but also because this review is getting a tad long, and I need to cut this off before I go over 2,000 words.

On the whole, Finale is a serviceable series finale. It manages to tie everything together, bringing some of the best and most interesting aspects of the entire show’s run while having a strong emotional core. On the other hand, it not only has things that straight-up bug me to the point of effecting how much I like the episode but also leaves a negative impression on previous episodes.

In a way, Finale is a microcosm of the entirety of Other Space, for the good and bad. Sure, it is saddled with a cliffhanger that will never be addressed, which will undoubtedly turn off many viewers (which I’m accounting for in my final recommendation). With that said, on the whole, I’d say Finale is about at the quality of Into the Great Beyond…Beyond, but after some truly great episodes, it leaves me wanting.