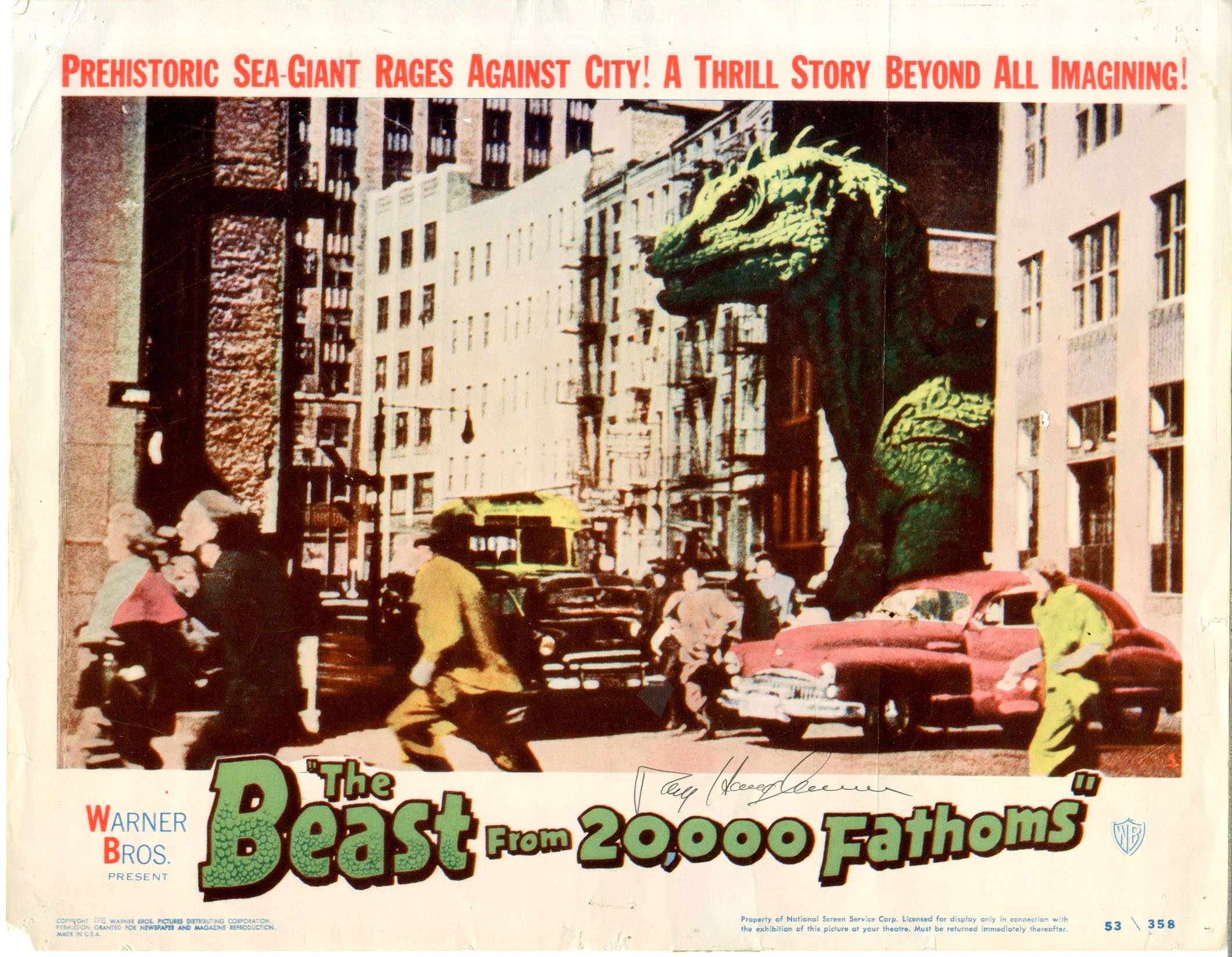 Now I’m betting some of you fine CFS readers are at least tangentially aware of movies that feature some kind of giant monster. I mean, there’s my boy Godzilla, but since you can see I’m talking about the 1953 monster movie The Beast From 20,000 Fathoms, it should be clear we’re sticking to the American side of the nuclear monster craze of the ’50s and ’60s. But looking back at the genre, the rhedosaurus, along with King Kong – you know, that obscure ape no one ever talks about anymore – is the granddaddy of all giant movie monsters.

Now, it goes without saying the single best part about The Beast From 20,000 Fathoms is the special effects, with a special mention to the true star of the movie; the rhedosaurus. Designed and created by the great Ray Harryhausen in his first outing as technical effects director, the monster and all its rampages are the biggest reason to watch the movie. This may sound bad, but I was cheering whenever the rhedosaurus was on-screen just wrecking everything around it. It’s no wonder that a whole genre sprung based on the work of Harryhausen’s special effects wizardry. Like Jurassic Park, you know a movie’s special effects are great when they stand the test of time compared to the rest of the movie.

So now it’s time for the shoe to drop off of the proverbial foot. Mainly, while Harryhausen’s effects were certainly fun, I had one hell of a hard time taking anything else seriously. I mean, watch the first ten minutes. It starts with how the rhedosaurus is freed from its Arctic 100 million year-long slumber and released during a nuclear test in the Canadian arctic. That’s all fine and good, but then it lost me within the first minute when the test is called Operation Experiment. The movie never managed to recover for me after that cinematic sucker punch; after that one name, I lost all capacity to regard this movie as a serious bit of science fiction. Maybe that’s on me – I have read The Paper Menagerie and Rendezvous With Rama over the last week, so my views on what makes quality sci-fi are admittedly a bit skewed as of late. Plus, once I realized just what I was watching, I was able to adjust and enjoy the movie as something schlocky action fun.

That said, there’s still stuff that rubbed me the wrong way. If you’ve watched sci-fi giant monster flicks, you’ll no doubt have heard the general complaint that many of these movies suffer from being burdened by inane human plots populated by 1-dimensional characters. Now while I may not be a full expert, based on what I’ve seen it’s safe to say the tradition started here with The Beast From 20,000 Fathoms. Looking back on it (I watched it yesterday as of this writing) I could not tell you the names of the characters without looking them up on IMDb even if there was a gun to my head. In terms of plot, it’s paced rather swiftly, quickly shuttling the unfrozen dinosaur from Baffin Bay to New York City for a good ol’ rampage while the characters just kind of run around being wildly trusting and leaping through even wilder leaps of logic until they manage to actually do something to stop the rhedosaurus in Coney Island. It really could have used another 10 minutes – its runtime is a lean 80 minutes – but even then I’m not sure it would help anything. Maybe that all sounds super harsh, but comparing this to Godzilla (1954), it feels like a prototype that has long been exceeded. I mean, this may be schlock, but as Godzilla (1954) proved 16 months later, schlock can still be thematically and emotionally hard-hitting.

So is The Beast From 20,000 Fathoms high art? No. Is this a great movie for a MST3K-style hangout with some friends? For sure.