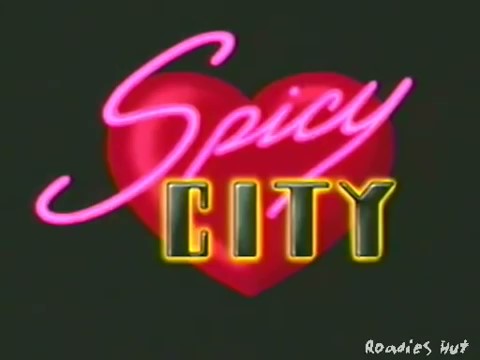 Hey everyone, welcome to the first post of my overhaul of Off the Beaten Path. Safe to say, things will be different for Off the Beaten Path. Instead of reviews episode by episode nominally 3 times a week, I will be reviewing a whole season at a time roughly twice a month. If you’re disappointed I’m no longer reviewing each episode, don’t despair. This way, I have an excuse to watch more TV, and I can cover more ground for you all.

So what show did I decide to usher in this new change? Well, this show is truly one that is worthy of Off the Beaten Path. It’s an HBO show from the 90’s that has been so forgotten it’s not even on the HBO apps on top of never getting a physical release. It’s a trailblazing show that has been eclipsed by similar programming that followed suit. A show created by an established filmmaking figure that many don’t realize he made. This show I talk of is Ralph Bakshi’s attempt at a cyber-punk anthology Spicy City.

My Thoughts on Spicy City

But all that, to be honest, can be gleaned from a quick internet search. The real question here is “what did I think of the show?” To be quite frank, I found it to be rather lacking.

Why is Spicy City lacking?

If you know me in person, you know my interest in Bakshi as an animator. He was pretty much the only animator who pushed back against the constraints of the attitudes towards animation during “The Dark Age of Animation”. Sure, his stuff was always caricaturesque. Responding to the attitudes of the time that animation was solely for children, he would overcompensate, making his movies as in your face explicit as humanly possible. That said, his early works have a soul, a sense of being. Bakshi had things he wanted to say about the human condition. Spicy City doesn’t have that.

Watching the 6 half-hour episodes that makeup Spicy City, I never felt the spark that makes stuff like Fritz the Cat and Heavy Traffic worth the trip (as weird as those movies are). It didn’t feel like Bakshi – or his specially chosen writers room for that matter – had anything of note to say. Instead, it felt more like a cheap vehicle for titillation. It was almost like Bakshi was trying to copy himself without understanding what made his early stuff work.

Ok, but what about some specifics about what I didn’t like as opposed to generalities and feelings? This wouldn’t be an Off the Beaten Path review if I didn’t throw any specifics in, would it?

Well, for something in my filmmaking wheelhouse, my first thoughts tended towards the writing. If I had to sum up my opinions on the whole at its best, it would be Anatoly Dyatlov from Chernobyl saying “not great, not terrible”. The characters are very thinly drawn, relying on stereotypes that even at the time of release were considered at best mildly offensive. Also, it didn’t help that a lot of these characters have no redeeming qualities to latch onto, making rooting for them to be extra hard.

It also doesn’t help that the stories were, for the most part, not all that interesting on a pure storytelling level. It’s an odd situation where the stories are both filled with fat that can be trimmed, but also not substantive enough on their own. Like, if the plots, you know, helped facilitate arcs (or had arcs for that matter), the lacking characters wouldn’t have been so egregious in my mind. Instead, we get story beats that keep their one-dimensional characters from becoming anything more.

The dialogue was also pretty hammy and stilted, which in conjunction with the stereotypes at play and overly fatty storylines made for one hell of an uncomfortable melange for far too much of the overall runtime.

They also, in my mind, wasted a good premise. When science fiction is good, and I mean really good, it often asks questions about the human condition, using extrapolations of current trends and out-there ideas to examine rather timeless themes. With something cyberpunk, I imagine stories about looking at the ramifications of a post-singularity society, how technology can be used as a tool of the oppressors and the oppressed, etc. When I think of good cyberpunk, I think of properties like Blade Runner, Ghost in the Shell, The Matrix, and other stories akin to those. Spicy City doesn’t concern itself with that.

To be fair, there are two episodes, Love Is a Download and Sex Drive, that address cyberpunk themes with something close to interest. Otherwise, the show isn’t all that concerned with examining these topics and themes. Hell, a lot of the time they don’t even use the setting to set up interesting scenarios. Sometimes they play a role, like the cloning storyline in Tears of a Clone, but never move beyond the point of window dressing. In other words, they didn’t need to be cyberpunk.

If anything, Bakshi’s crew is more interested in the aesthetics of cyberpunk than any kind of subtext. I mean it looks and feels like noir styled cyberpunk. Corruption is present at all levels of society, technology is used nefariously, and the attitudes of the people are expressly nihilistic. That said, I don’t think Spicy City even wants to be cyberpunk. Hell, maybe it would have been better as just a straightforward noir anthology, but I’m doubting that based on what I saw.

Can feminine representation catch a break?

Even more than the misuse of genre and poor character writing, the treatment of women in Spicy City is something else. It made me think of the worst aspects of Heavy Metal and Love, Death & Robots S1 (side note: isn’t it kind of fitting that my first review using the new format is also an animated anthology for adults?). Namely, the stories are often vehicles for women to be overtly sexualized for exploitive titillation, even if it doesn’t make all that much sense to do so. I mean, other than three characters – and they’re not immune to the exploitation – all the main women on screen are curvaceous dames wearing skin-tight dresses at best. Hell, one of them was completely nude the whole time she’s on-screen (case in point, one of the notes I wrote down while watching literally says “are all the women in this world allergic to wearing pants?”). So yeah, I’m highly doubtful any women watching would appreciate what they see on screen.

To be fair, the show advertises itself as having a “seamy side”. That said, a lot of the seamier aspects don’t translate due to a lot of very ugly implications. More than once (as in multiple episodes), unconscious women are caressed and fondled. There are also instances of women essentially being assaulted, only for them to fall for their assaulters. All of this is played up for sex appeal.

What else grinds my gears?

But what about other aspects of Spicy City? There’s more than just the writing to comment on. Like, what about the animation? The sound design? Well in that regard, Spicy City is somewhat better, but not great. At best, it’s middle of the road Bakshi animation.

Let me also put it this way. If you were to show me any random episode of Spicy City, I would be able to peg it as a Bakshi production. Just the animation styles, the character models and the world creation would be enough. It’s not top of the line Bakshi though. It feels cheaper, rougher around the edges.

That said, I’m willing to forgive Bakshi here since he’s dealing with a TV budget back when TV was still considered an inferior medium to features (The Sopranos was still two years away by this point), but that doesn’t change the fact his animation from 20 years prior looks better.

What I find more disappointing is the score. Namely, the score was pretty forgettable, which for a Bakshi joint is saying something (I still think the Wizards score is the best fantasy score ever put to celluloid, and I will fight you on that). It wasn’t terrible by any means, but I’m not going to pull it up on youtube just to listen to it as I do with Wizards and Heavy Traffic.

So there you have it, the whole sordid show that is Spicy City. God this was both exactly what I was expecting and not at all. I was expecting a decent Bakshi production, another interesting milestone lost to the sands of time and pop-culture. Instead, I found something I wish had remained buried.

So do I recommend this show to others? That honestly depends. If you’re a diehard Bakshi fan and a completist, then I think you’ll find Love Is a Download, Sex Drive, and Raven’s Revenge entertaining enough to be a cult interest. Otherwise, I’d just stay clear. You can find better ways to spend 3 hours of your time. Like, I don’t know, rewatch Love, Death & Robots S1 aka the good version of Spicy City.

I bet some of you are still interested in watching Spicy City. Maybe some of you are actual die-hard Bakshi fans. Maybe others are like “Joe, your taste sucks and I don’t trust your recommendations so I’m gonna watch it to prove you wrong”. Hell, maybe some of you are just plain curious. In any case, you can find the episodes at this YouTube playlist so you can watch them whenever.

Off the Beaten Path | Blood Drive