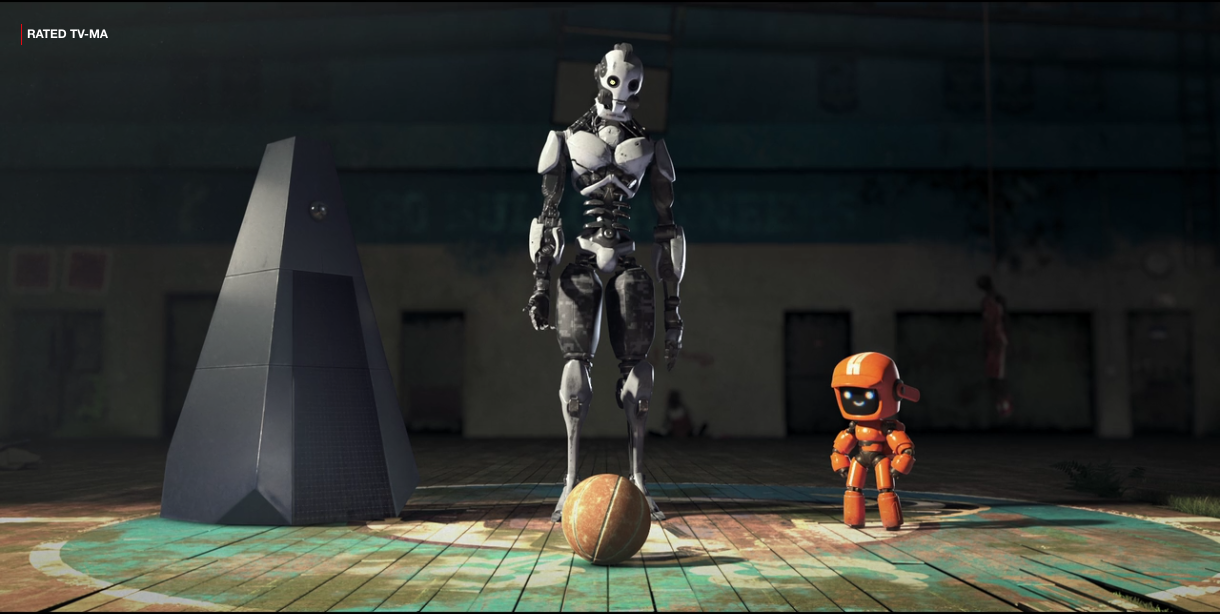 Now that we’ve covered our first action-filled episode, I think we could use a bit of a breather. Luckily for us, Love, Death & Robots S1 has us covered with episode two, Three Robots. If you didn’t heed my advice in watching Sonnie’s Edge before my review, that’s cool, you do you reader. That said this episode is only 10 minutes long, so I don’t really see why you wouldn’t watch it, but again, you do you reader. But enough preamble, let’s talk about Three Robots.

Based on a short story of the same name by John Scalzi, it follows three robots – XBOT 4000, K-VRC, and an unnamed monolithic Alexa – in the distant future over a day of sightseeing a post-apocalyptic human metropolis. They visit some popular tourist destinations, each with a dark post-apocalyptic flavor. These include a basketball gym, a diner, a hotel, a shopping center, and a military base. While experiencing these truly human installations, they comment on the illogical nature of humanity, pick up a cat while thinking it could be a bomb, and learn about their pasts.

When I first watched Three Robots back in March, it was the first short I truly enjoyed. If I had to describe my opinion in one word, it would be “charmed”. While the episode doesn’t have a narrative backbone or arc, it didn’t bother me in the slightest. I enjoyed watching the three robots go about their vacation getting in the sights and making pithy comments. In a way, I felt like a tourist watching tourists.

Also, unlike other episodes (I’m looking at you The Witness), the episode is comparatively audience-friendly. Other than some strong language, it doesn’t feature violence and sex, yet alone gratuitous violence and sex. This means Three Robots is something even the harshest critics of the show could easily enjoy. Thus it was one episode I’d suggest to random people to ease them into the show. My only real complaint about the episode on my first watch was the cat and the ending, which features the cat. That fucking cat. Otherwise, I’d say it was probably one of my favorite of the comedy episodes of the season.

On rewatch, my opinions haven’t changed. I found the humor both nice and dark yet endearingly innocent, I hate the cat, and so on. What I did get from the rewatch is a deeper understanding of why I liked what I liked and why I hated what I hated.

Since there is no definable narrative arc in my mind, the robots are the lifeblood of the short; if they didn’t work, the short wouldn’t work. Safe to say, they work very well. Their dynamic and characterization falls into the style of the comic trio so well it’s even built into their physical designs. This  helps us viewers plug into their dynamics and allows us to quickly absorb the humor.

XBOT 4000 – voiced by Gary Anthony Williams – is the leader, the most humanlike and serious of the robots yet also the one who consistently questions why humans were the way they were. K-VRC – voiced by Josh Brenner – is the fool, the lackadaisical one who is there just to have fun, and poke and prod at XBOT. The Alexa – easily my favorite of the three – is the smart one, explaining humanity’s foibles and giving bitingly funny hot takes while reenacting human things itself.

While you can tell that the trio is my favorite part of the episode, I also liked the animation for the most part. The animation, provided by Studio Blow, is 3D CGI just like Sonnie’s Edge, but it fits better. This is because, other than cats, everything that’s animated is either a robot, dead, or landscape. These are all this that’s easy to make look good with CGI animation.

Now, this can’t be a total gush fest, since this episode isn’t perfect by any means. So what’s wrong with the short? The cat. That fucking cat. Not to say the cat is wholly negative. When it first appeared and shortly afterward, there were some solid jokes made about the cat (like the belief that the cat would explode based on historical records of the game Exploding Kittens). However, something about the cat felt off the longer it was on screen. At first, it was only the animation, which while looking good was off just enough to make it look uncanny.

It was during the ending when the cat reveals it can talk – voiced by Chris Parnell no less – that the unsettling feeling took hold. That uncanniness was then cranked to eleven when the nuclear silo quickly filled with cats like some kind of furry tidal wave. Even on rewatch the speaking cat ending came out of nowhere, so it didn’t help itself. That said, it comes down to personal opinion about the cat. I could honestly see some people loving the cat ending. It also helps the cat is a small enough figure that it doesn’t drag down the quality of the short that much despite my complaints.

To conclude my rewatch of Three Robots, despite the cat dragging it down some, this episode is one of my favorite of the comedy episodes, and one I would recommend to anyone.

Off the Beaten Path | Blood Drive