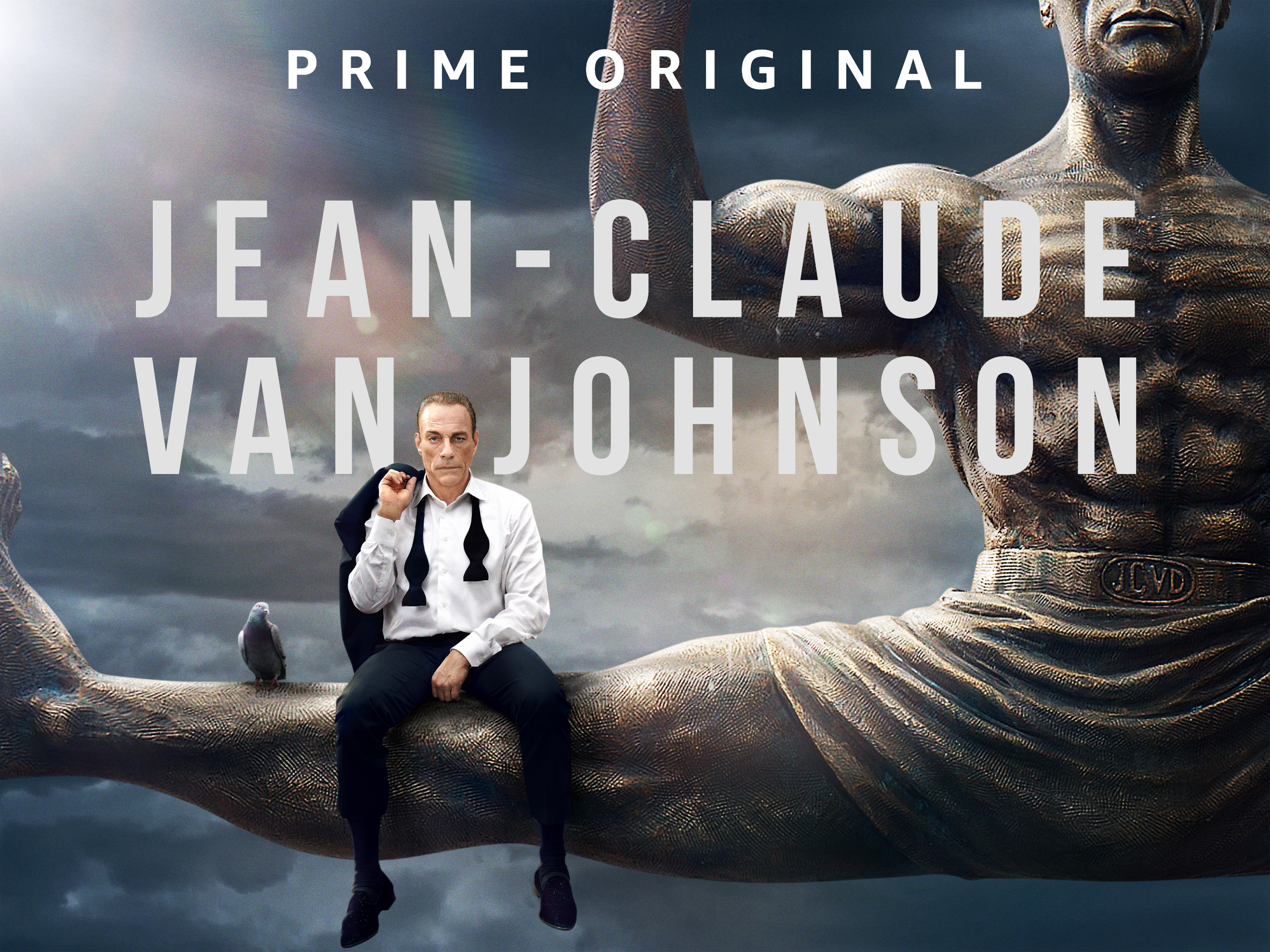 Man, wasn’t November a whirlwind? Between the emotional rollercoaster of the election and the COVID-19 uptick, it’s easy to think we’re going into March 2020 2.0.

At least, that’s where I’m at.

So after a month break from Off the Beaten Path, I’m back in the saddle with a great show for you all. It’s a show I watched for the first time back in April when the pandemic was reaching its first peak here in the states. The show, a 2017 quick bite of a season, is the spy-comedy/homage to old-school action cinema Jean-Claude Van Johnson.

So how good is Jean-Claude Van Johnson? It’s good. Surprisingly good. What makes it so good? For that, I’d boil it down to being anchored by great writing that’s full of heart and humor, plus a great performance from JCVD.

The sheer power of good writing

I bet when you think of action cinema, you don’t often think of a tight script holding things together. That’s not to say an old school action flick can’t have good writing – one the best examples of screenwriting in modern cinema is the action classic Die Hard – it’s just that people come for the fights, one-liners, and what-not. Action is a genre of spectacle, not exactly one known for depth.

All that to say that when we talk about what makes Jean-Claude Van Johnson so good, we gotta start with Dave Callaham’s scripts.

One thing that is pretty obvious at the outset is that Callaham intends to examine every facet of the kind of action cinema JCVD starred in when he was big. In the process, he will turn those tropes upside down, break them down, put them back together, all done with humor that comes from deep love of the genre.

If you watched the provided trailer, you can see this with the mooks deciding that fighting JCVD one at a time is better than everyone rushing in all at once. And that’s just one example out of many.

But this decon-recon switch isn’t limited to just individual tropes. The story pulls these all the time to varying degrees of seriousness.

When JCVD goes cowboy cop on a mission and inflicts mass casualties on the enemy, one of them – Filip, his superfan doppelganger also played by JCVD – survives and is used to bring further chaos into the mission while showing the emotional toll such reckless antics can inflict. When the Bondian supervillain with world-dominating ambitions is defeated, his intact drug empire is scooped up by a competitor who’s more than content to just keep the machinery running and make money while ruining lives. When Vanessa makes her first kill, she’s devastated by the fact to the point it haunts her for months.

If I had to come up with a theme for these, it’s the inevitability of time and genre evolution and the need to grow, but that the past can inform and inspire the present and future.

There’s also a larger decon-recon switch in regards to JCVD himself, but I’ll cover that in a bit when I discuss the performances.

Besides the decon-recon-heavy script, the script is incredibly tight in other ways. The jokes are constant, full of running gags that come back in the best of ways.

One of my favorites is Jane’s pitches for ridiculous action movies at Paramount that star Channing Tatum; my favorite of those might be Jurassic Universe, cause dinosaurs in space helmets sounds like the perfect kind of dumb fun.

More than that though, the story is incredibly paced. It’s only 6 half-hour episodes, but man it moves at a clip that you can easily forget what happened before.

For instance, while the operation is originally meant to just bring down the Serbian drug organization, once the weather control chip comes into play the HK falls by the wayside. So when the weather control device and the organization behind it are brought down in If You’re Lucky, you almost forget there are two more episodes to go. Later on, when the trio is fighting to bring down UMA, this gets reversed, and the now-forgotten weather control device is brought back to help save the day. It’s lowkey astounding how well that works out, but it does with casual ease.

This brings me to one aspect of the writing I haven’t mentioned yet; the character arcs. Otherwise, I don’t have any real complaints about the writing. The closest one I can come to is that I’d like more than 6 half-hour episodes to watch, but that’s me reaching; I doubt Jean-Claude Van Johnson would be nearly as good if it were long enough that it didn’t feel like a longer action movie.

The character work of JCVD and crew

I mentioned a few hundred words ago that the biggest decon-recon switch has to do with JCVD himself and the purpose of the action star. When Pilot starts rolling, we are introduced to the man JCVD, long after his action stardom has waned. Here he’s portrayed as an empty shell of a man who needed to feel like a hero to feel any self-worth. With those gone, he’s just (in his mind) the unlovable Jean-Claude Van Varenberg.

So when he rejoins the acting/spy game, he does so with the misguided idea that he could just pick up where he left off.

The game has changed, but he hasn’t. When things start going his own way – when the story becomes more Bondian with the super spy game around the weather control device – it doesn’t fix anything.

If anything, it makes things worse.

He alienates his companions, a worse villain has moved in, and all his past heroics are revealed to be no better than his empty acting heroics. It’s not until he learns to accept himself that he not only performs a truly heroic action, but he trusts his younger companions to carry on the action star legacy in his stead. Only then does he become truly happy, completing this decon-recon switch of the action star.

Now here’s the thing. This whole decon-recon switch of JCVD wouldn’t work nearly as well if there wasn’t an equally good performance from JCVD to anchor everything down. But boy does he deliver one hell of a performance.

From the comic moments where he looks ridiculous as he tries to resume his former acting/superstar life to moments of sheer sadness like his life in the wreckage of the Brussels orphanage, he grew up in. Sure, he’s playing himself, but he sells everything he’s put through. It honestly might be one of the best performances of his career.

If you still don’t think he’s fully acting, just watch Filip, the other character JCVD plays. I’m not gonna lie, JCVD playing a Belgian Gollum is hella amusing, especially once his neck is sprained and he starts walking around like Igor. It’s a shame we don’t get more of Filip, though seeing as he’s a timecop now he could have shown up in season 2 (it makes sense in context).

And JCVD isn’t alone on the acting front. While some of the performances weren’t overly memorable the acting of the other main cast members was all at the very least solid. Kat Foster in particular does a great job as a former flame/partner in the field Vanessa. Acting opposite JCVD you can believe they had a complicated romantic history based on their chemistry. Moises Arias’ performance as Luis, the straight-man, was more understated of the spy trio, but he also sells a horrific past he’s trying to escape from.

All in all, I don’t have any real complaints about the acting.

But do you know who really should also get some recognition for their performances? The stuntmen and women throughout. There’s at least one action set piece per episode – the highlight to me is the on-set fight in A Little Conversation About Trust – that just wouldn’t work without the stunt fighters and performers selling the chaos.

What about some mentions about the production?

This brings me to a greater point about the rest of the production, which deserves some quick mentions.

Looking at IMDB, I see that every episode was directed by Peter Atencio, and that feels about right. It’s not the best directing I’ve seen on Off the Beaten Path. That honor is still held by Jane Campion with Top of the Lake. That said it was remarkably consistent. Like Jane Campion before, the consistent directing made the season feel like one cohesive vision. In this case, like one long action movie. So, you know, kudos to Atencio for never leaving me bored while watching the show.

Lastly, I’d like to give shout outs to the cinematography and the sound work. On the cinematography side, we get multiple styles of action movies that are all distinct. Plus, all the action is captured by Jas Shelton’s camera and made nice and clear to see (cough cough “shay cam” cough). As for sound, each punch, kick, gunshot, explosion, and whatever else you can think of action-wise is woven into an ongoing soundscape.

All in all, everything behind the camera helps Jean-Claude Van Johnson feel like any of the action movies it’s lampooning.

So, yeah, Jean-Claude Van Johnson is a great show, probably the best thing I’ve covered since Top of the Lake.

It’s a well-written decon-recon switch of old-school action cinema, featuring a surprisingly great performance from Jean-Claude Van Damme. Sadly, we won’t see JCVD fighting in “the Time War”, but honestly this whole season is a well-wrapped narrative package so I don’t mind too much.

So if you have an afternoon to kill and want something with humor, heart, and lots of fights, do yourself a favor and check this out.

If you’d like to watch Jean-Claude Van Johnson, you can stream it for free on Amazon Prime.