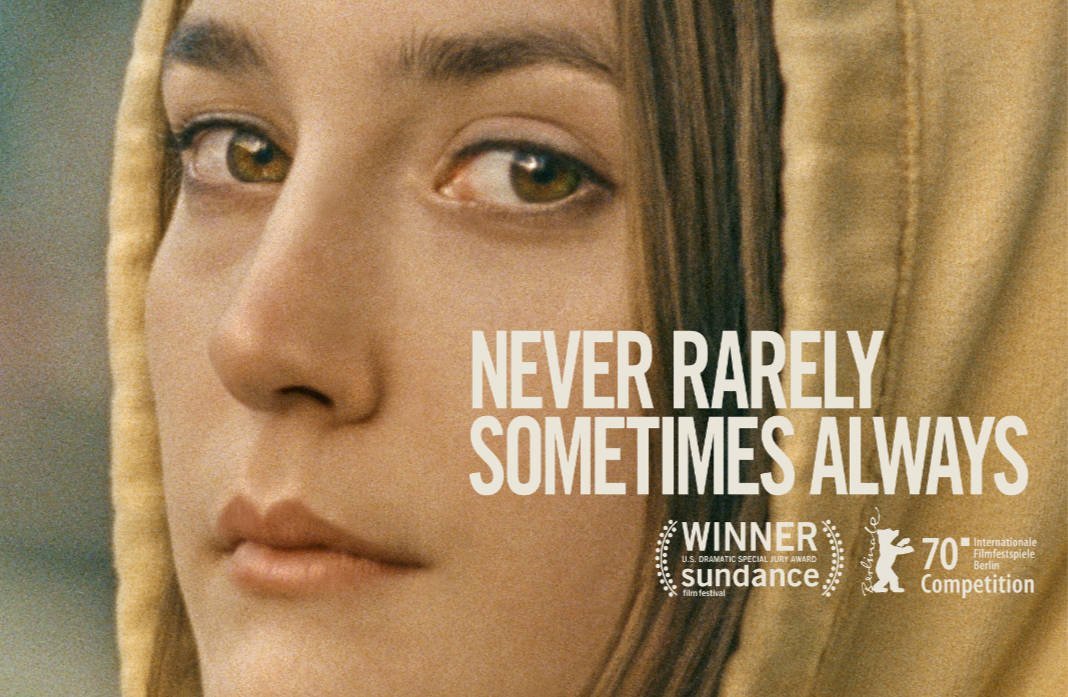 At its core, “Never Rarely Sometimes Always” is a film about a teenage girl who gets an abortion. The subject matter that this movie tackles is literally an example of the word “controversial” in the Merriam Webster Dictionary, so it is no small feat to craft a story with the kind of sincerity and thoughtfulness that we see in this film. It’s understandable to expect biases or the furthering of some political aim given the topic of this movie, but I found that the focus of the film wasn’t necessarily on the ethics or morals of getting an abortion. Rather, it explores the effects of sexual abuse and what it’s truly like to be this young woman as she navigates through her unintended pregnancy.

Autumn (played by Sidney Flanigan) is a 17-year-old teenager with some musical talent, as showcased in the opening scene, where she boldly sings a solo at her high school talent show. During a lull in the song, a male student in the audience yells “slut”, and Autumn, although slightly thrown off, quietly internalizes the interjection and soldiers on singing. This is our first glimpse of the sexually hostile presence that men seem to hold quite often in this film. Even after the show, while Autumn sits across from her family at a restaurant, she locks eyes with another young jock sitting with his friends as he makes a lewd gesture, tonguing the inside of his cheek at her. Then, her father, who is equally confused and frustrated by his daughter’s constant bitter mood, gives her grief at the dinner table, leading her to abruptly storm out of the restaurant, but not before stopping to throw water in the face of the obnoxious jock. These opening scenes efficiently set up a feeling of isolation that Autumn has from her family and peers.

Autumn skips school one day to get a pregnancy test at a local clinic. She doesn’t tell anyone about the positive result and instead researches ways to terminate the pregnancy at home. Those scenes, including one where she punches her abdomen repeatedly, are some of the toughest to watch because of how hopelessly desperate and scared she is. Her usually emotionless expression turns into suppressed sobbing and it’s evident that she is deeply conflicted about her actions. Autumn eventually tells her cousin, and only real friend we see in the movie, Skylar (played by Talia Ryder), about her pregnancy. They scrape together the savings they have from working at a local grocery store together and embark on a trip from their hometown in Pennsylvania to New York City to seek out medical help.

The writer and director, Eliza Hittman, manages to accomplish several difficult things in this film. First, she manages to encapsulate the vulnerability of the young female experience. The high use of close up and POV shots facilitate a feeling of embodying the characters that has us understand their fears and be similarly wary of their threats. From the perverted businessman staring down Autumn and Skylar on a late night subway ride, to their own boss at the grocery store kissing their hands every time they turn in the money from their cash registers, there is a distrust of men throughout this movie that is completely justified. Hittman’s second accomplishment is by exposing the humanity behind this politically charged and often overly convoluted situation that so many young women experience. One way she does this is with the minimal use of music, which is an important decision because it does not dress up or dilute the emotional effect of the scenes, grounding us in the realism of the depictions on screen.

The performance by Sidney Flanigan is an acting class in subtlety. The layperson might perceive her as being too dreary or unexpressive, but I think it works perfectly for the character. She is desensitized to all the trauma and disappointment in her life so what’s left is a calloused, distrustful demeanor. Talia Ryder, as Skylar, is the friend that everyone would love to have. She is compassionate, almost unconditionally caring, and very resourceful. Their inseparable friendship is the most endearing part of the movie.

The importance of “Never Rarely Sometimes Always” cannot be understated. It’s a sobering reminder of the prevalence of sexual abuse in modern culture and how it can impact teenagers. But more to the point of this film, we see how society is set up to either hinder or help those like Autumn. And the weak points of that system that need improvement are highlighted through the turbulent journey of young Autumn and Skylar.