My Thoughts: The Purge 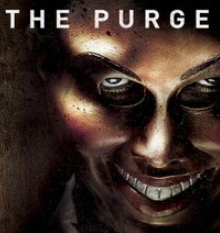 Today we are tackling The Purge (2013), directed by James DeMonaco. I have to say, the last time I saw this was probably in 2013. I saw it as nothing more than a thriller/action film because frankly, I wasn’t looking for much else. However, with time and experience, comes the responsibility to search for deeper-than-surface meaning. Surprisingly, I found a bit more than I thought I would when exploring the caverns of meaning within this film. What was initially viewed as a movie primarily focused on gunplay and tension turned into a bit of a symbolic piece. So, I will start from the depths of symbolism and rise to the sea level of simpler viewing opinion.

So we have the Sandin family, who seem to be self-made thanks to the obvious exposition placed somewhere in the middle of the movie, and they are quite wealthy and seem to have a healthy family dynamic. Then we have this group of purgers, who seem to come from old-money kind of money and are out to do whatever they want because it’s all technically legal . Lastly, we have the stranger; who is described as homeless and the purgers call him degrading things such as “pig” and “swine”. He is this tale’s wanderer.

All that being said, let’s talk about this symbolism. The stranger takes refuge in the Sandims home in an attempt to escape the savageness of the purgers. Is it safe to assume these purgers probably also destroyed this man’s possessions? Why did they do that? Because they think they are better than this man because they have more. Also, they justify their horrid actions by the fact that it is “legal”. Essentially, the mindset for them is that doing bad things is okay, especially if technically legal. The stranger is let into Fort Sandin because, while Mr. Ethan Hawke is distracted by the convenience of safety, the innocent son unlocks the house. The stranger is saved. However, soon after there is some family drama in the household, which honestly I see the point of, but it doesn’t add a ton to the story. So during the ruckus, the stranger runs off into the maze of a home to evade capture yet again. We are now confronted with the part of the movie where the purgers are asking the Sandins to give up the man who has sought asylum in the house. Initially, the purgers create this feeling of familiarity with Mr. Sandin, making it seem like they’re the same (and I might mention that the viewer is meant to feel like they are). Mr. Sandin makes the decision to give the stranger to the group of youngsters outside because he would rather save his family from torture and torment than try and save the life of someone they don’t know. The family finds the stranger again and there is a struggle between him and Mr. Sandin. One has a gun. They fight for the aforementioned deliverer of destruction. Dad is knocked down right as the stranger has been shot. Another struggle arises. In order to regain control, Mr. Sandin commands his wife to stick a blade into the wound of the stranger; the bullet wound. She refuses. He yells again. She hesitates. He demands it! Filled with regret, she complies. The stranger is then tied up, once more. Mrs. Sandin then begins to question if, the compromise of their perceived moral high ground in order to survive is worth the cost. Mr. Sandin takes the avenue of “we do whatever it takes to survive”.

Basically, a wanderer is beaten down by those in a higher class who proceed to take all he has and with their appetite of greed still at hand, they want the priciest and most precious item on their sick and delusional menu: his life. Innocence then looks for the good in the wanderer. After being welcomed into the castle by the young and juvenile, the wanderer quickly becomes labeled as dangerous and threatening by the ruling authority. Why? Because he is where he shouldn’t be. To them he doesn’t look, talk or act like like the normal castle-dwellers. Because this family does not know this man, he must therefore be bad. Furthermore, the offenders are these individuals who are literally purging themselves by maiming those who cannot possibly defend themselves. Why? Because they can. Or by their definition, they [the lower class and homeless] are there for the benefit of the upper class.

Does this stranger have much of a say in his dilemmas? Probably not. Does he adapt? Well, he certainly has no other choice. This movie become more than people killing each other. It is also a commentary on the base-value that people give to others, based off of essentially nothing more than economic-status and circumstance. The only person who seems to see past that is Charlie, the son. There is a good amount of character growth compacted into the final part of the film, which is like a forgiving scent in a somewhat foul-smelling room.

I think the Sandins, more specifically the father, lost his way. It was stated that he was self-made so the film persuades you into believing he comes from humble beginnings. This is reinforced when you hear his wife mention his come-up. So what happened when he was told to give up a man to die or face death? Simply put, he wasn’t ready to make that decision. He never figured he would have to. He surrounded himself and his family with wealth and fancy things, presumably promising protection and safety. Sounds like he bought the bullshit he was selling to others; money can buy absolute protection. So in his mind, why should he worry about moral dilemmas when he has enough money to escape them?

I'm going to spitball some questions here: Can he be blamed him for sacrificing a stranger to save his family? Should we more specifically address the fact that he was so quick to decide this? How about the lengths to which he and his wife took to capture, contain and send the stranger to the wolves? The plot of this movie prompts a handful of conversational, controversial and philosophical questions.

The struggle continues for the Sandins because after refusing to give up the stranger, the purgers break into the house as promised. As the home is flooded with machetes, axes and guns, the family hunkers down, ready to defend themselves.

Mr. Sandin, now standing with his rediscovered virtues, fights the invaders shotgun and pistol in hand. He punches a few, throws one or two of them into a wall and kills several more. After the battle of the living room, he is bested by a purger.

As the purgers are planning to finish off the family, a group of local neighbors bust into the house, armed to the teeth, and proceed to dissolve the purgers with lethal force. As newly-widowed Mrs. Sandin thanks her comrades, she is interrupted. She is informed that this group is that of wolves in sheep’s clothing. They are there to terminate the Sandins. Why? Because the Sandins have more stuff. No seriously, these neighbors and “friends” want to execute a family because they got a new edition on their house. What kind of shit is that? So these neighbors killed a group of killers to savor the taste of terminating their original prey. They went through all of that because they had more material possessions.

So is there loyalty? Earlier in the film, the main purger shoots one of his “friends” in the head to show Mr. Sandin that loyalty means nothing when all is legal. When rules disappear who is there to judge our actions? Some say each other; some say religion. You think a purger cares about what your beliefs or morals say? When the laws of authority no longer exist, are humans capable of devaluing human life and moral code on a massive scale? That is a difficult question to answer, but in a movie marketed as a modern day dystopian slasher film, it’s refreshing to see those subtleties presented to us as viewers.

Wrapping things up, the simplicity in the structure of this film gives it some room to breathe and operate when focused on the action. Sometimes, it seems to be a bit too much room, but one can attribute that to building tension in the movie. That being said, the action and main storyline work because there are loose ends that have little further explanation; the movie doesn’t spend too much time tying them up. All together, The Purge is entertaining and the concept itself is worth the watch.

So when should you watch this? I think it makes for a good weekday night flick. Depending on how deep you want to look at this film, it can have you pondering for a few days after the viewing.

Date Movie: Yeah, totally. It’s not a super complicated plot so talking during the movie, if you're into that sort of thing, won’t have you lost in later scenes.