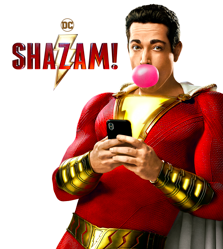 So this week I decided to treat myself to a personally long-awaited superhero movie-watch, Shazam! (2019), directed by David F. Sandberg. Going into this film, I had no idea of who this hero is. I don’t read comic books, but I’ve seen most super hero movies that have been coming out since Iron Man dropped back in 2008. The excitement I had for this film originated from my interest in how the promised comedic elements would tie into the DC style of superhero films. Well let me tell ya, I was definitely surprised by a fistful of things in this piece. I definitely didn’t see the misalignment between Billy and Shazam coming. One would think that the main character should have at least some consistency in terms of personality and character traits, but that doesn’t seem to be the case with Billy and Shazam. Plus, the film almost unknowingly writes this hero as a villain who is surrounded by the most incompetent and forgiving citizens of a city I’ve ever seen in a film. I also think that this film wasn’t too sure about it’s main audience and demographic; do we go with family friendly or dark and violent? Why not a little bit of both? One can also say that a little bit of hot sauce goes well with black coffee. Two solid items with drastically different tastes and when put together they taste about as good as one can imagine. Truth be told, most critics seem to like hot sauce coffee because this film did get great reviews. I also believe that this was an optimal opportunity for DC to final nail a darker movie. Shazam! has all the cornerstones of a great dark film with CGI demons, Zach Levine, who objectively killed it as Zhazam, and plenty of other chances to expand on their toes-in-the-water moments of violence and chaos. Alas, DC chose to focus more on the teenagers barely old enough to legally see their film in theatres.

Okay, time to rant. The biggest problem for me in this film is how the young Billy and Shazam seem to not fit together. Billy is the underdog who isn’t scared of bullies and is literally too cool for school. However, whenever Shazam shows his face, Billy becomes very skittish, sarcastic and wound-up. Oh and he all of the sudden becomes best friends with his foster brother Freddy after he gets his powers. Ahh how quickly a friendship can form when one of the people involved can run at the speed of light. Anyways, teenage Billy seems like the kind of kid who keeps his head down for the most part, not the type who would crack one-liner jokes at the drop of a hat. That being said, Shazam seems to take every comedic opportunity by the horns and ride that laugh rodeo as long as he can. On top of that, when Shazam first starts to show up, I forgot that he had some serious inner turmoil (i.e. his mom). Billy is exactly what the movie writes him as, a boy who has experienced some of the darker sides of life. Shazam does not carry that load with him. It seems like Billy checks his baggage before he boards SuperHero Airways.

So I thought DC really had an opportunity to make a solid and gritty film with Shazam, which fits their criticized and possibly unintentional theme of making darker movies. With this, they went with more of a family-friendly project. Or did they? If not for the PG-13 movie rating, I wouldn’t really be sure of whom the film’s main demographic is. They split the movie between quick gags, high school hierarchy and businessman-eating demons.

Speaking of those fallen angels, there is one scene in the movie when the main villain releases these “Sins”, who appear in the tangible form of terrifying beings with sharp-as-razor teeth. In the aforementioned office party our friends from the underworld wreak havoc on the executives. At first, I applauded the film’s dedication to violence, in the sense where they said, “Okay, we’re going to have that demon chomp that guys head off”. Bravo. However, when we revisit the newly decapitated and former employee, after his run-in with death, there is no blood or anything. Then we get a nice view of the place after the implied slaughter and there isn’t a drop of red anywhere. In fact, the victims in that room looked like they just hogged down some foot-long bologna and cheeses and are now suffering from a post-munchies coma. With dark undertones of color and sound that scene could’ve reached a new high.

Furthermore, I was hoping the film would explore the plotline of Billy and his mother more. Initially, they built this story arc of emotions pretty nicely. The problem here is that the conclusion of it was minimal and a bit anticlimactic. I think a scene that displays the rejoining of mother and son should have some versatility in how the characters act. Both characters in this instance seemed to ultimately not give a shit. Some might say that maybe they were just putting up a front. Cool, okay, but show me that! Give me the emotional scene wherein we see the mother and/or son grieving about the situation at hand!

My last thought is that I was surprised that the citizens of Philadelphia, where the film takes place, didn’t label Shazam as a super villain. Here are some of the things that Shazam did in the film: he went around shocking peoples’ phones in order to “charge” them, wherein he completely destroys one, he demolishes a truck that belong to a few high school kids (for context they are bullies in the movie if you're into Dexter-style justice) and to top it all off, Shazam accidentally causes a bus to almost fall off of a bridge. He eventually catches the bus, but not after seemingly killing and/or leaving some of those inside with life-altering injuries. Remember when I wrote that thing about the non-bloody office extravaganza? Well, putting aside my vote for a dark DC movie and more looking into some of the inconsistencies of the movie, I think there needs to be some light shed on this bus scene. After this vehicle gets rocked by electric bolts from the sky, courtesy of Mr. YouGuessedIt, the bus breaks through the side-barrier of the bridge to only be caught by some generic cables right up until Shazam gets his shit together. During this short time that is void of bliss, several passengers on the bus fall and hit the windshield as the vehicle was left completely vertical and hanging off the side of the bridge. Then the bus is caught by our champion and slammed to the ground with a tremendous amount of force, presumably causing more injuries to those inside. Wait! It’s a miracle! The worst thing that seemed to have happened to the ill-fated riders was that of the man who smashed the windshield with his entire face. His injury you ask? Broken neck? Nope. I’m no doctor, but that man was showing, at most, some minor symptoms of a concussion. So at least they threw that in there.

My biggest takeaway here is a reminder that directorial concept and finding and appealing to the main demographic of audience members needs to be properly executed when putting together a flick. Unfortunately, Shazam! seems to give partial effort to all of those and we’re left with a teen-movie absent of adventuring into the darkness that awaits audience members.

Date movie: yes. Actually, this is a date movie at its finest. The plot isn’t very gripping or complicated so getting lost in conversation will not leave you high-and-dry later on.