My Thoughts: Ready or Not 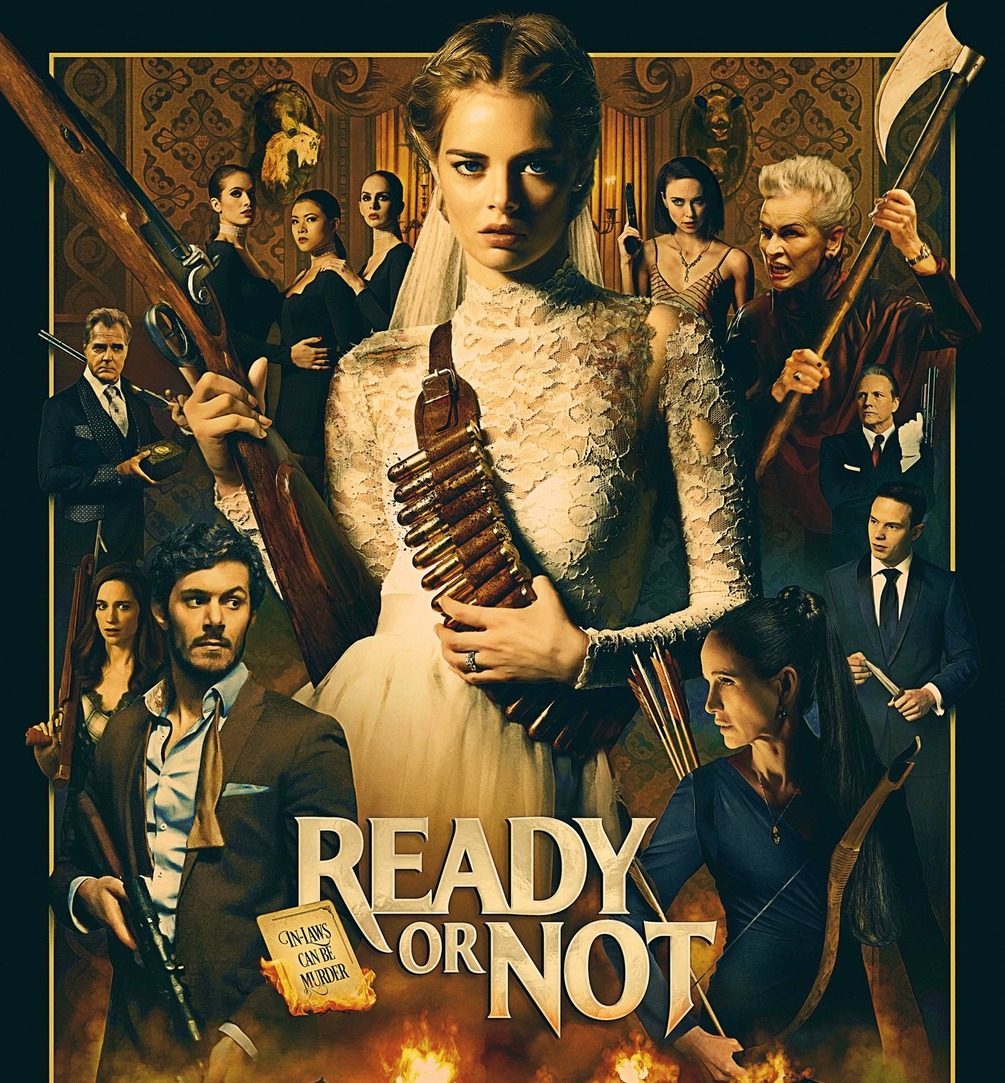 *This is your spoilers ahead warning.*

This week I’m breaking down the film Ready or Not, a black comedy thriller that was released in 2019, directed by Matt Bettinelli-Olphin and Tyler Gillett. Now, going into this I had no idea what was in store. I saw some interesting advertisements about it, which I’ll get to later, but was motivated to watch mostly because of friends recommending it. I’ll be addressing the family turmoil and dynamic, my beef with the character of Alex, Samara Weaving’s stunning display of talent and I’ll wrap things up with the production as a whole.

A thought I came upon was, doesn’t it seem odd that everyone in the family is perfectly content with straight-up murdering people and completely devoting themselves to Satan? There’s the argument of, people will do anything for family, which could be applicable, but Ready doesn’t really concretely determine where people’s loyalties lie. There’s Alex, who broke away from the family only to completely turn on Grace in the end. Then there is Danny (older brother) who, by the sounds of it, has participated in some heinous acts in his time in the name of the family, but turns on them in order to help Grace escape. What about the people who married-in? Is it just by chance that several psychopaths marry into the family? They try to make the justification that the married-in individuals were super susceptible to begin with and would do anything to maintain the wealthy way of living they’ve become accustomed to, but I don’t necessarily buy it. People can be cruel and do a lot for obtainable wealth, but murdering people so cavalierly is a different story.

Speaking of Alex and marriage, I think ultimately the main romantic dynamic in films, especially when the individuals are at risk of dying, must be a fortified one in order to persuade the audience to give a shit about whether or not they survive. Personally, I couldn’t get behind Alex at all throughout this film. I just could not overlook the fact that Alex delivers his wife to potentially meet her doom. It immediately places him in the position of the lying asshole who is putting his wife in harm’s way because he didn’t want her leave him. I had a hard time believing Alex’s character. He seems to have a good amount of distain for his family, yet he participates in this ceremony. It is stated that if one of the family members is to get married, they must do so at the family estate and play a game on the night of the wedding. If one or the couple resist, they apparently die; it is never touched on how they die, but a family member assures us it will happen. Is that just another promise that might happen in this movie? So why not just refuse to get married? Well, Alex says that Grace would’ve left if they didn’t get married. There are a plethora of options for Alex: try and explain it to your fiancé, partner and life-teammate before committing to what transpired in the movie ; just don’t get married, run away together and start anew; let her go, maybe? From the beginning I cared zero about one of the main characters because of the way they fit into the main plot of the story. Furthermore, I think that the character of Grace was given a lot more freedom, less restrained by restrictive and inconsistent rules and plot-points. Let me tell you, Samara Weaving, who played Grace, took full advantage of that liberty because simply put, in the most uncreative description possible, she was great.

I was thoroughly entertained by Weaving’s performance. Not only did she display her versatility as a performer, but she also reached depths of her character past the potential labels of “basic” or “shallow”. Objectively, we have a girl (the character of Grace) who was raised in a foster home, but we seem to note nothing of any longer-lasting effects of that upbringing, leading us to believe that she doesn’t wear deeper conflicts on her sleeve of seemingly non-existent, childhood-dwelling woes. So when Grace starts kickin ass and taking names, I kept wondering, “Where the hell is this coming from?” I was waiting for some sort of justification from her, but it never came. She had adapted to killing people so quickly (seems to be a theme throughout this whole film). Weaving displays her emotions so brightly, just as that of a booth with fresh produce at your local farmers’ market. There was the instance where Grace is trying to flag down a car after squeezing through a fence, that cut deep into her flesh, only to be met with the driver stopping, yelling at her through the window about staying out of the road and then driving off. Weaving then unleashes a barrage of insults and adjectives you wouldn’t want to use as descriptions while present at a dinner table. However, she does so in a way opposite of puns: it wasn’t cheap. Cussing and anger can be a quick grab for an audience’s attention, but can swiftly become overused. In this case, Weaving is so committed to the anger, frustration and surprise that I don’t feel as if I picked up that scene from the discount section in the store. That scene was the expensive cut of beef thanks to Weaving’s performance.

Let me be clear, this movie was definitely entertaining, especially for its ninety-five minute runtime. However, I had to really try to accept things as they were otherwise I was spent my precious viewing time on debunking somewhat fragile plot-points. A big example, what’s with the rules and traditions of the game? I mean the family was constantly talking about rules and traditions, yet they keep breaking them. At one point the patriarch of the family (Tony) pokes fun about how they are kind of picking and choosing about which rules to follow. The problem here is that without strict rules, specifically in a horror or thriller film, how can tension be built and retained at a proper level? Why does tension matter? A big thing about this type of movie is that tension plays a dominant part in regards to the discharge of feelings the film infects an audience member with. If you break the rules, you pay the price. Therefore, as characters slowly tear through the boundaries set before them, they meet their fate. Tension builds up like the pile of junkmail you have in that one drawer. Perfect instances of this rule-setting can be found in films apart of the Saw franchise. A simple little “cause and effect” sort of thing; because you broke the rules, now you’ll see how much of an expendable thriller movie character you actually are. My gripe with Ready is that the “rules” in this film are more of guidelines, which turns into a big problem for the story and character-justification. This is clearly presented when Tony (dad) has a conversation with his family about how Grace, the sacrifice, must be alive for the ritual at the end of the game. If that is so, then why give everyone a weapon that can easily kill their target? The butler, who can apparently get third-degree burns on his face and still function like a normal human, uses a dart gun at one point to tranquilize Grace in order for a clean capture. Furthermore, Aunt Helene discusses the fact that it is apart of the rules to use traditional weapons, which is “followed” to a certain extent. Also, how is it that Emilie (the sister) can shoot a maid in the face on the first try, but miss Grace later on whilst standing three feet in front of her? Overall, I can see where the film wanted to go, but ultimately, I think it became too much of a fusion restaurant for its targeted, hungry demographic.

Date movie: Yup, actually this is a great example of a date movie. It’s low-risk. Plus, there is a good amount of action in this along with humor to be found. Available to stream on HBO NOW.