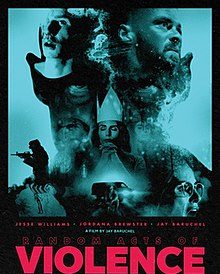 We’re back just in time to chat about a new gem that I recently discovered in the deep mines of horror movie mountain. There’s a chance I’m a little late to the party, but regardless I'm glad I made it. That pretty little stone of a film is Random Acts of Violence (2019), directed by Jay Baruchel. First of all, I’m a big fan of Jay. Whether it’s his acting like in movies like This is The End or his directing like that in Goon: Last of the Enforcers (2017). Lucky for us, he really shows his chops in RAoV. His style is refreshing with conceptual commitment. When I saw the title while surfing Shudder (this is not a sponsored piece, although it has a deep archive of all things horror) I didn’t expect much in terms of who would be attached to the project, but once I saw that Jessie Williams and Jordan Brewster were starring in it, I was hooked. Needless to say, the two of them do a very solid job of carrying the film along. Lastly, I must applaud the commitment to violence of this flick. Baruchel finds the line between horror and gore all whilst tiptoeing it with ease.

Let’s first hit the button for the “style” of the film. Baruchel introduced several elements into his movie that blend together like a fresh strawberry-banana smoothie.

A blend of elements I really enjoyed in RAoV was how it interweaved animation into the storytelling. It’s quite the fitting move because the plot revolves around a comic book series. Instead of simply showing the images from the fictional printed series, the movie decides to fully engulf the viewers with the story within the story. This proves important because one of the central focuses of the film is villain’s tale within the comic books. As an audience member, I truly got the feeling for the levels of the film because they are so visceral.

This feeds into my next point about the lighting and sound design. On several occasions the film hits the viewers with intense, bold color schemes that completely encompass the entire environment. For instance, when the core four characters stop at a gas station, the movie watchers are taken into the establishment and met with brilliant colors of yellow and red. Not only does this affect those seeing the simple station onscreen, but really it also sets the tone of how big of a role the lighting will be playing in the rest of the film. Along with the lighting, the sound design also plays a pivotal role. Throughout pretty much the entire piece, there are dark and ominous undertones being played. I’m attracted to this not only because the gothic and church-like sounds are so fitting, but also because it’s a constant way to build tension, which they do. The stakes in this story always seem so heightened and are also absent of the possible byproduct of looking/sounding overdramatic.

As per usual with horror movies, I am always curious about how committed to violence the film will be. Will they show gore? Will they let the camera linger on a violent and horrid act? Do they include realistic sounds instead of throwing cliché screams in there? Well, for this flick I must applaud the commitment to violence. I do this simply because there are far too many horror films that beat around the bush will violent acts and action. The violence itself becomes implied when real horror fans want to see the blood and hear the chaos. In RAoV we do see the intensity and spontaneity of murder and torture and Baruchel lets the audience experience the turmoil with the characters that face these traumas. Don’t let this deter you though. This film does all of this tastefully. Again, this is not a pure gore film, but a sprinkle of it on top never hurts the flavor of a slasher cake.

Truth be told, I never heard about this movie until I was scrolling through Shudder. The title snagged my initial attention, which was then strengthened by the hour and twenty minute runtime and the cherry on top was the fact the Williams and Brewster are the stars. Also, I must applaud Baruchel’s acting because he has moments in this movie that I personally haven’t seen from him before. Not in the sense of ability, but in the sense of I haven’t seen him play roles that give him the opportunities that this one did. Anyways, Williams and Brewster play very well off of each other. There is Williams, the stressed out lead with a troubled past who is accompanied by Brewster, his all supportive and caring other half. It can be a bit of a challenge to develop characters in a short amount of time, a problem that many horror films face, but these two performers do so without much difficulty. I also mustn’t forget to mention the job-well-done by supporting cast.

Bringing all this to a close, let’s review. Jay Baruchel does a solid job all the way around with this movie. Good plot? Check. Cast can carry the film? Check. Commitment to violence? Check. Then of course we need to go back and appreciate the lighting and sound design of the movie. All of these elements compile a fun watch regardless of whom it is with and if you're a horror fan, this is a nice and modern addition to the genre.

Date movie: Hell yeah it is. This is a great example of something that will have tension building from the begining along with some jump-scares. You don’t have to pay ultra close attention to the flick, but the more you invest in this film, the more you will get out of it. So grab some popcorn and your favorite sweet or salty snack because this is a fun one to miss.