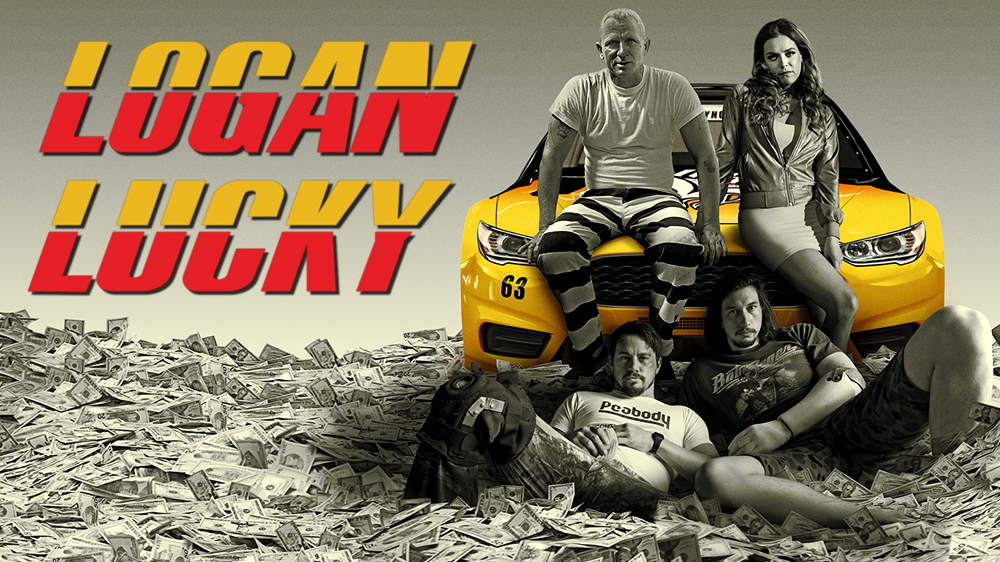 After watching Knives Out (2019) I decided to give Logan Lucky (2017), directed by Steven Soderbergh, a try as a result of a general discussion I was having with a friend about Daniel Craig’s accent-work. Here are a few things that I took note of during my enjoyable afternoon of viewing Logan Lucky: no matter how big or small, the film takes the time to focus on farcical and comedic situations, there is a an unbelievable ease to the pacing of the film and all in all, the movie stays true to the genre of “heist” films.

We’ve all heard the saying, “It’s the little things.” One of the greatest achievements of this film is that they not only included most small moments, but they actually gave them arguably more viewing-time than your average looked-over interaction is typically awarded in cinema. This not only promotes natural growth of a scene, but also puts the comedy in a situation where it can be more organic rather than seemingly calculated. For example, there is the scene when Jimmy, Joe and Clyde (Tatum, Craig and Driver) are about to break into the vault to acquire their locked away treasure. However, Mr. Joe Bang (Craig) reveals his master plan to achieve the riches adjacent to them, hiding behind through multiple feet of concrete and steel. Will he use dynamite, as one might think if they were watching an Acme cartoon from the 80’s? Nope, he instead explains to Jimmy and Clyde how he will use bleach, gummy bears and a salt substitute to get into that riches-filled box of fortitude. The two brothers, Jimmy and Clyde, look at Joe with quite a quizzical look. Joe then tries to give a brief explanation behind his chemical theory and how it will get them to ‘point B’ after sitting around at ‘point A’ for a chemistry lesson. We then see Daniel Craig drawing up a chemical equation on a nearby wall with a piece of chalk (it is never explained where this chalk came from or how they acquired it, which in my opinion is quite funny) to explain his thought process. Hysterically enough, the two brothers are actually interested in the free science tutoring that is taking place. Oh, did I mention that this is all taking place during the time-sensitive heist? I mean, seriously it happens right in the middle of it, which adds to the hilarity of this scene so much more. Furthermore, there is another instance of this when Jimmy and Clyde go to a local fair to recruit Joe’s brothers into the crew. During this occasion, Joe’s kin mention that they are now devout followers of Christ. With that in mind, they no longer break the law. This brings into question the entire purpose of the meeting and leaves the Logan brothers a bit dumfounded. The Boom brothers go on to explain that they need a moral reason to steal, due to their newfound faith. Otherwise, they would be breaking the law for selfish and greedy reasons, which are unacceptable excuses for them to participate in such an operation. The next few minutes of screen-time are spent talking about different possible moral justifications behind the robbery. The brilliance of this moment is simply the fact that it is shown and that it happened. I think this could’ve easily been brushed over or overcomplicated in order to evoke laughter. However, the simple, dry-humor approach seems to add a flavor of realness to the cinematic gumbo they have been stirring. In film, one has to remember that every minute is precious time. Logan Lucky decided to spend a spoonful of extra screen-time on miniature moments and the resulting entertainment value is anything, but mini.

I’d like to take a moment or rather a paragraph to talk about the overall pacing of this film. In my opinion, the timing of Logan Lucky is not only unpredictable, but it doesn’t feel forced at all. Soderbergh can take a small moment and extend it like a measuring tape or take a large moment and shrink it like a cotton shirt in a dryer. I allude to this in my comments on “the little things” in the section above. Furthermore, in terms of visual velocity, I really enjoyed the tactic of high-paced setting-footage and slower-paced dialogue scenes. Let me explain: while the robbery is going down, whenever the racetrack or shops within the track are shown the camera is usually moving pretty quickly and covers a lot of ground. That being said, when the cameras are turned onto the robbers, mid-heist, the frame settles and steadily transitions between angles to become less stagnant. I feel that the sped up shooting/editing tactic initially creates a ton of timing tension, which is then interrupted by a slower, sometimes more intimate scene of dialogue. Normally, I would feel the abruptness of this transition like a person sitting in the passenger seat of car driven by one of those people who claim they can drive stick. However, I didn’t feel that way. I felt like the stakes were established as high, but the tension faded enough to alleviate some pesky anxiety that might fog up a line-filled scene of discourse.

The last thing I’d like to touch on is the overall contribution this film gives the “heist” genre. Not only does it positively contribute with its whimsical characters and fleeting yet drawn out moments, but also stays true to its roots with a pinch of unexpected new elements. One consistency with robbery movies is that there is usually a leader who is the centerpiece to the operation. Take for instance, Clooney in the Oceans movies, Robert De Niro in Heat and Ben Affleck in The Town. Logan Lucky gives us Jimmy Logan who fills this role, much like the aforementioned thieves. Jimmy is even more proven to be the all-important member of the group when his entire plan is finally unveiled at the end of the movie. Also, another bit of heist-driven loyalty that I quite enjoyed is how the crew in this movie isn’t made up of experts brought in from certain fields to help with the job. In this film, the squad is a collective of blue-collar, working folk who accomplish extraordinary things with ease and a calm swagger. Take for instance, the Logan crew compared to the two Howard brothers, played by Chris Pine and Ben Foster in a film of similar circumstances, Hell or High Water (2016). The only thing fluid about the Howard brothers is their commitment to violence with a splash of family love due to their rather low and arguably more realistic ceiling of abilities. As a side-note, Hell or High Water is one of my favorite films and I highly recommend seeing it. Anyways, the Logan brothers very rarely resort to violence, unless you’re Seth McFarlane. They prove that cooler heads truly tend to prevail. Overall, this film stays true to the original recipe, but Soderbergh seasons the sauce a bit differently than what is traditionally expected.

Date movie: It depends. You can easily laugh along with someone else while watching this movie or sit by yourself and enjoy Soderbergh’s simple and successful cinematic formula for entertainment. Be warned, if you do watch this with someone else and you are not fully focused on the movie, you might run into a few, “Wait, what happened?” moments.