My Thoughts: Knives Out 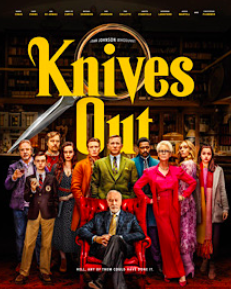 THIS IS YOUR SPOILER ALERT

Knives Out (2019), written and directed by Rian Johnson is easily my favorite “Who Done It?” film since Scream. It pretty much has all you need, a southern P.I. with a smooth and deep voice, a cast of campy characters full of intentions that are anything but good and a kind-eyed innocent individual whose moral compass guides her to the treasure at the end of the map. This week I’ll be discussing whether or not Blanc, played by Daniel Craig, is actually a good detective, the accomplishment of making a film of this genre whilst navigating the murky waters of modernity and I comment on the costuming, set design, lighting and cinematography.

Straight-up is Blanc a good detective? The way that I see the question at hand is similar to when my friends and I will watch a bad movie and open the floor to comments about it afterwards. The point being, even if the discussion leans more towards hypercritical I always mention that we’re still talking about the movie so it left enough of an impression on us to keep the film at least somewhat immediately relevant. So in Mr. Blanc’s case, I don’t think he’s a very good detective, but he solved the crime and apparently solved enough of them to have a stellar reputation. Simply put, in the end he got the job done.

An instance of Blanc’s professional sloppiness is how he never thought to check the handwriting on the envelope full of money that magically showed up on his doorstep. Later on in the film, Ransom is shown writing on the envelope, which we can only assume is true because Blanc was depicting the situation. Take that piece of paper and compare it to the family members that just had the patriarch murdered and you got yourself a bonafide suspect, Mr. Blanc!

Also, when Blanc, Marta and Lt. Elliot are walking down the back pathway to the house, Blanc just notices the footprints for the first time. So you’re telling me that during the initial walk of the premises, he didn’t see those? Then he cavalierly tells Marta not to step on the path in order to avoid a scene-contamination. With that in mind, I did want to see that part of the movie. I want to see the discoveries and whatnot even if they’re botched by a lackadaisical attitude. The movie wouldn’t have been as entertaining as it was if bits of information like that casually were shared in the background of other scenes. I think the delay in action by Blanc can be excused for the sake of the movie’s overall opportunity for enjoyment.

Originally, I was going to go on a tangent about a few plot-holes, but I'm pretty sure I covered a good chunk of of my gripes in the section above where I cover Blanc not living up to his reputation… or does he? Regardless, I realized something after finishing this film; it truly does stay faithful to the genre of mystery and must be viewed as such in order to optimize entertainment. My biggest problem with the genre of “Who Done It?” is that I don’t think that it is an easy accomplishment to make such a film mixed with modern times.

At the end of the film when they give us a view of Ransom, when he switches his grandfather’s medication, he just waltzes right into a crime scene. They had yellow do-no-cross tape strapped across the open door to the study where the death took place. I truly don’t think that both the police and one of the best private detectives would be so careless. Then again, Blanc gets the job done so maybe his neglect of modern regulations are part of the method to his madness.

Furthermore, technology has severally limited the chances of anyone getting away with anything. Whether or not those resources are actually used to solve a crime is another discussion entirely. Still, the tech is there. For example, at one point in the movie the medical examiner’s building is torched and with went the supposed paper trail of the all-important toxicology report, which would prove the then-believed overdose of Harlan. So they chalk it up as a loss of important evidence. However, my first thought was, “Wouldn’t they upload those records to the cloud or some sort of backup server? I’m no computer expert, but I cannot believe that when that building burned down, all records went with it.

Lastly, how about that security cam footage? Harlan Thrombey is portrayed as a traditional man who sticks to his decision, especially when his “mind is made up”. Therefore, I can see why he would still have a security system from the 90’s. However, it’s hard to believe that that outdated technology could be maintained up until the movie’s present time. One of the security monitors even gives a bit of a nod to our dearly departed Radio Shack. Plus, most of the system in that security booth is in bad shape. So if the management was concerned with upkeep, they display it very poorly. I think that system would’ve busted by the time the audience has entered the film and spare parts would be harder to come by than just paying for a new system. That being said, the avenue of utilizing nostalgia, clever dialogue and some seriously well-done acting does a nice job covering for what I just brought up.

When it comes down to it, this film did a great job of staying true to the type of film it was aiming to be all while tackling the complications of modern times. Most of the complaints or unrealistic views of this film, including my own, can be dissolved with some good ole suspension of disbelief and a pinch of “shut up and enjoy the movie”.

I would be doing this film a disservice if I didn’t bring up the costume and set design, lighting and cinematography. Kind of tying into what I was saying about the film in terms of staying true to the genre, this would simply be impossible if it weren’t for the visual setup. Knives Out does a spectacular job of finding the right house to place a majority of the film, overflowing with small hallways, secret windows and book-filled studies. On top of that, the costume of Blanc is spot-on. His suave suits of gray are as fitting to the noir detective as is thyme and butter to a nice steak. If they didn’t entirely commit to Blanc as a character, including his wardrobe, he would seem a bit out of place and that slight distraction can be all the difference of whether or not he is believable as a piece in this game of modern Clue. The lighting proves to setup environments of warmth and welcoming, but also rigidness and ice-cold temperatures. With the constant changes of perspectives in this film, the lighting needs to be as fluid as possible. Otherwise, the equilibrium of setting can be thrown off. I applaud the fact that the lighting design used the playground of a house and all of its windows to showcase other aspects of this film. In terms of the cinematography, the angles are just as shifty as the lights, in the best way possible. There is this moment when Walt, played by Michael Shannon, gives quite the monologue and the DP gave us an upward shot from the floor immediately putting Shannon on a more powerful platform than he already sits; a perfect example of empowering characters through shot-selection; bravo.

I have to say that I while I initially had my doubts, I am a big fan of this film. Personally, mystery and suspense is what attracts me to a movie. Even though I commented on a plethora of things that could’ve potentially detracted from my experience, it truly did not. None of the commentary in this article should dissuade you from watching this!

Date Movie: yes and no. Will you actually be paying attention to the movie or are you going to be doing more chilling than Netflixing? If you’re on team, “ No, I actually wanna watch this movie” then throw it on and enjoy the mystery! If not, I recommend you save it for another day. Half of the fun of these films, at least for me, is trying to figure out the ending before the film is finished! That can prove difficult if you’re more focused on someone sitting on the couch more than listening for small details and keeping an eye open for clues in the scenes. Knives Out is available for streaming on Amazon with an Amazon Prime membership.