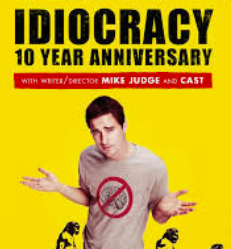 You ever see something that reminds you of a movie, and you can’t get that cinematic image out of your mind until you watch it? Yeah, me too. Idiocracy (2006), directed by Mike Judge, has been circling around my head like a dragonfly spiraling toward a lily pad on a hot summer afternoon. Even though Idiocracy was written in 2005, much of what was presented still maintains its humor. I will be highlighting instances such as: the brutal decline of the entire population’s intelligence, branding and ads, funny miscellaneous add-ons, and a discussion of what knowledge availability can do to the individuals who make up the masses.

An obvious theme in this film is that over time, an exclusive mindset can morph into an all-inclusive buffet of poisoned information. One reason everyone in the future is screwed is because eventually the intellects of the world shift their focus onto things of the materialistic persuasion, which appeal to the whole population. Speaking of the masses, there are groups who believe that education and knowledge should be saved for a select group of individuals. Certain people, institutions, and organizations unconsciously display this thinking. Idiocracy’s narration shows us how the highly educated can lose their focus on bigger issues, like maintaining and optimizing the Earth, and instead magnify trite matters, such as hair loss and erectile dysfunction. In this realm, power is in the population and the people. If we, as a society, try to exile people from proper education, can we really be surprised or frustrated when the multitudes set their sights on issues related to material goods and activities, so they can achieve immediate gratification? Let me be clear, everything in this movie is taken to the extreme, and the problems are those faced by fictional persons in a futuristic world. This world suffers from the adverse effects of having a general lack of knowledge, which leads to more visceral obstacles such as waste management, arms distribution, and…. I'm going to stop here, because it’s a wonder that such a world could survive. When watching this film, no doubt viewers must pump up their “suspension of disbelief” in order to enjoy it to the full extent.

Piggybacking off my “power in the population” sentiment, I’ll add that Idiocracy does a great job of showing the importance of individual thinking and research. On several occasions, when a decision is to be made, it doesn’t come down to the individual. It usually starts with a singular person, but when the problem is vocalized (which is the primary way of thinking for most of these people), an idea’s sustainability is in the hands of the collective thought. When the POTUS – who is played by the always-funny and multitalented Terry Crews – is addressing Congress, multiple “congressmen” speak out in defiance of the President’s statements in the dumbest way possible. Not only is there no order or method to Congress’s madness, but the members almost immediately change their tones and views on the President’s plans due to peer-pressure. Without fundamental ideals to stand on, the uninformed gather together under the shelter of ignorance to protect them from barrages of truth and wisdom. All of this seems reminiscent of the hive-mind of social media that creates false or dimwitted information. In Idiocracy’s 500-years-into-the-future world, humanity lost its foothold in the mountain of correct information.

Moving more into this world’s problems, let’s dive into the satirical commentary on guns and trash. They are both everywhere in the movie. Obviously, when discussing the future, waste and its disposal will always be a major concern. The movie makes a powerful statement about guns, in a way that adds a huge comedic factor. One of the funniest moments actually revolves around firearms. The scene is set with the main characters (Joe, Rita and Frito) running away from a car and going around a corner because they are on the run from the police. After they reach a considerable distance, the police come into the frame and spray the car with bullets, continuing even after it’s destroyed. Meanwhile, Frito – the owner of the car – goes from despair to enjoyment, as the vehicle is set ablaze. Additionally, a crowd gathers around the car and officers to check out the scene. But they soon start to cheer the police as the machine-gun fire continues. This crowd turns into a riot, which implodes as the main characters make their getaway. Oh the humanity. As far as the garbage problem is concerned, it is uncontainable. If this world were a math equation, it would be the following: (F) represents the future (remember, this film takes place in the 2500’s), (T) represents a planet full of trash, (S) represents general stupidity, and (I) represents intelligence and institutions. Okay, so basically: F+S-I=T. Garbage maintenance is a regulated action in many societies, especially in first-world countries, yet this industry lacks the respect it deserves. The movie basically says, “Well, yeah, the garbage problem kind of snuck up on us.” Can I get an “amen” for recycling? Plus, as long as there are people out there who don’t believe in climate change, the dystopian future depicted by Idiocracy still holds its comedic value.

The ads in this movie are out of control. Of course, they are a huge stream of income and blah, blah, blah... I'm not here to promote or defend advertising. I'm here to talk about how Idiocracy blatantly reveals the fact that ads are slowly seeping their way into everything. Again, this movie was written in 2005. Think about the increase in the amount of advertising in the last fifteen years. Idiocracy has some major pillars that support the hilarity of a total ad-filled future. For example, what happens when corporations start buying the administrations that are supposed to keep them in check? I'm talking about acquiring them outright in the public eye, not via deals that are orchestrated and carried out under the table, which is how the world currently operates. In the movie, there is this one brand of sports drink called “Brawndo.” This drink has replaced water in every way except for in toilets, a fact that resurfaces every time someone brings up H2O. Brawndo gains full distribution rights because not only are the people dumb as rocks, but also, at one point, this monopolized brand legally buys the FDA. There it is: No FDA regulation equals free reign. As the film progresses, we learn that an essential component of this futuristic society is none other than Costco, except Costcos in the future are different. The wholesale franchise turns into a juggernaut of every industry and institution. Oh, and the one Costco store we get to see is as big as a city. The Costcos have everything from red couches to plane crashes. Yes, it appears there is a plane crash site near the dairy section! (On a side note, Frito is cast as having a law degree. And, in case you didn’t guess, he’s a horrible lawyer.) The movie point being made is that at some point, the society’s people stopped caring about monopolization – not only of specific industries, but also of the whole spectrum. In the real world, if the authority that keeps bigger companies in check becomes lackadaisical, cavalier, or greedy, our kids’ kids might end up going to college at Target.

Date movie: it depends. This film exposés will make you laugh. It’s filled with crude humor and butt jokes. If you watch this with someone who doesn’t enjoy this type of comedy, things might get pretty awkward when you laugh your ass off. That being said, this is one-hundred percent worth watching, even if it’s a solo job. This film is available for streaming on Hulu’s Cinemax extension (yes, it costs extra).