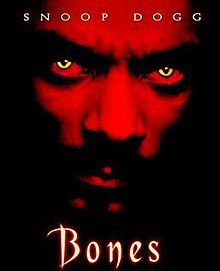 If you guessed that Bones (2001), directed by Ernest R. Dickerson, is about a character, portrayed by Snoop Dogg, who comes back from the dead to get revenge on those who killed him and cleanup his neighborhood, you would be one-hundred percent right.

This early 2000’s thriller/horror revolves around Jimmy Bones (Snoop) who was a protector of sorts for his now rundown neighborhood. When he was alive, he served as the community’s emblem of unity and betterment. However, his watch was cut short after being slain by those close to him. Decades after his passing, Bones is resurrected to tidy-up the streets of his old stomping grounds and enact revenge on those who betrayed him; this also includes anyone who gets in his way.

Also, I’m not sure how this was viewed at the time of its release, but I’m sure that you will laugh just as much as you scream when watching this. Furthermore, this is a solid opportunity to look at how horror films age and how they can transform as time passes. Whether it’s because of older dialogue, potentially outdated subject matters or technological advancements since the original production period, watching movies like this can be a refreshing sip of nostalgia and/or simplicity.

If you’re looking for a low-risk, possibly high-reward film to watch this Halloween, this is might feed your appetite.