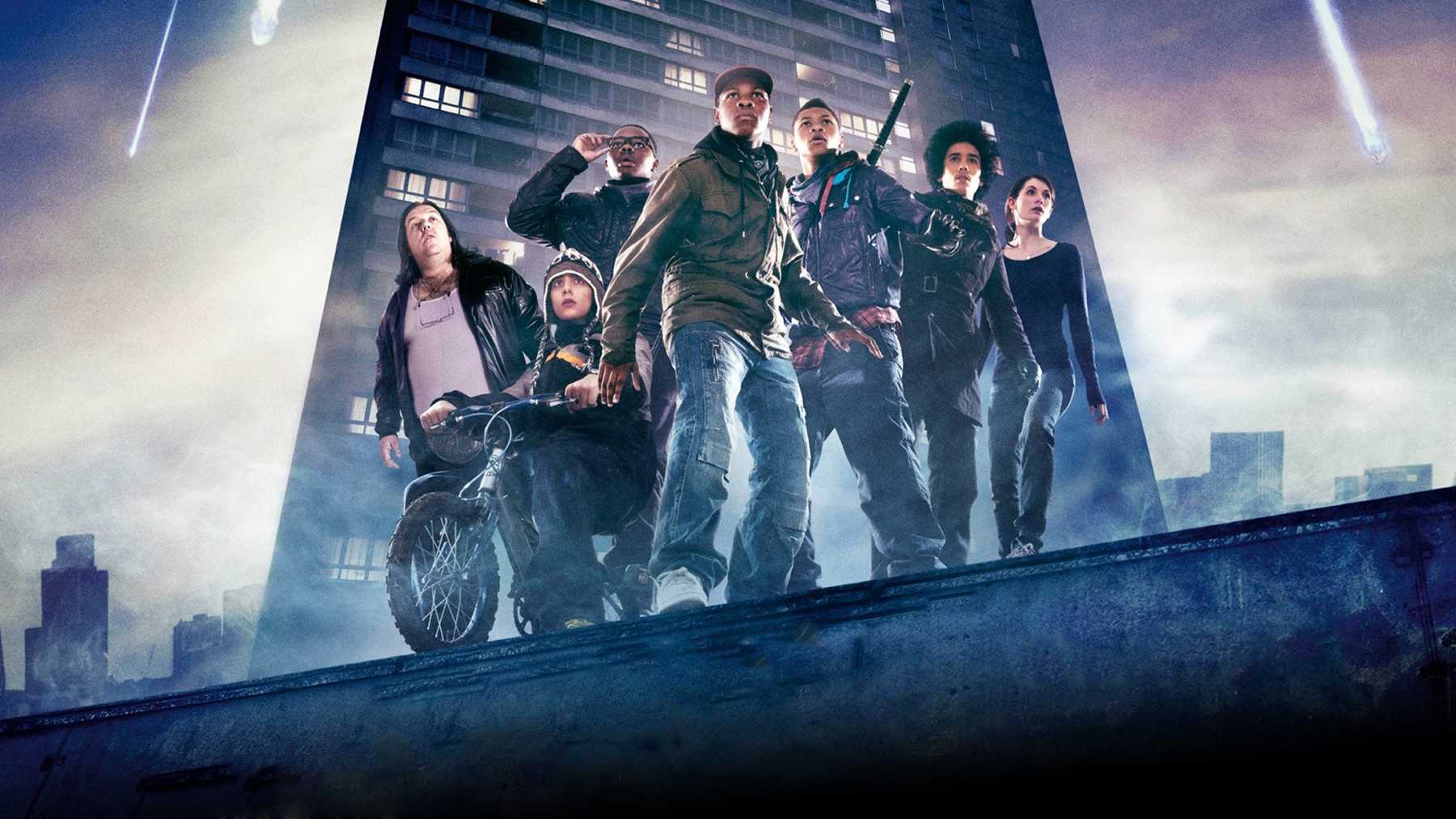 Attack the Block (2011), directed by Joe Cornish is a must-see horror/sci-fi to watch this October. The film presents us with a cornucopia of characters, all of which have striking individuality, and compliment each other so nicely. The splendid development of the characters along with the enticing world of the block combine to give us quite a lot of tension to keep you on the edge of your seat. If you are on the hunt for something fun and unpredictable, look no further. Do yourself a favor and throw this on the TV and relax with some popcorn and your favorite Halloween candy.

Getting right into it, something I always look for in films is the individuality of characters. I think that when there is a nice variety, I usually will find someone to relate to. Whether that relatable element is one’s background, outlook, physical appearance, etc.… ATB does a nice job of keeping things all over the spectrum. For instance, you have Moses (Boyega) who is the leader of his gang of teens. He has quite the demanding presence with a thick mystery to him. That can be offset by one of his mates, Pest who is a juggler of jokes and youthful moments. Then we have Sam who faces the monsters within her own neighborhood as well as the aliens invading. Her heart is just as fierce as it is kind. All of these characters are surrounded by others more different than the next.

Another great thing with these individuals is that they all hold high value. This film develops their characters rather quickly, but the timing seems to be right on point. Some pictures fall victim to underdevelopment of those in their movie and then the audience barely cares about whether or not the character will fall victim to the horrors that surround them. Unless of course it’s that one person who is literally in the scene to either be blown-up or torn to pieces. I haven’t found too many viewers who are massively upset over the death of such a throwaway characters.

Anyways, these chums are all expendable in the movie and therefore ATB has achieved the almighty combination for any horror/sci-fi film. That is:

Nobody wants to see their favorite character get the axe, but sometimes that’s what makes them our favorites. Maybe they went out like a hero such as Will Smith in I Am Legend; maybe they were simply a victim of circumstance like Owen Wilson in Armageddon. My point being, the film created good enough characters to where we feel something when they’re taken away. We sometimes, hopefully, get pissed when a character who we favor dies and we almost celebrate the occasions akin to when an asshole like King Joffrey gets offed. In ATB, I felt something every time a character passes onto the next life. Like I mentioned, they are a plethora of emotions, but I still felt something nonetheless.

On another note, I tend to touch on tension when writing about movies. For me, that is a huge. With that, Cornish finesses simple locations into states of stress and tightness. For instance, there is a particular scene where the crew must pass through a hallway of their building that is filled with aliens. In order to do that undetected, they choose to light off fireworks filling the floor with murky smoke. They then proceed to cautiously walk through the hallway one by one. Now, keep in mind that this is a small and simple hallway; our heroes journey inward. The smoke is so thick that each person can barley see three feet in front of them, which starts to really build the tension. Soon into their quest for the other side, pretty much everyone’s vision becomes extremely impaired causing them to have to rely on sound, sense of direction and self-composure. As the group moves along, things seem to be going well until the anchor of the line becomes a bit turned around, which is hard to do in a hallway with pretty much one entrance and exit. However, this unfortunate confusion is pretty believable considering the visual circumstances. Of course, this type of situation is a one-way ticket to certain death. Furthermore, there is one character that spends a good chunk of the film in a garbage/recycling bin as an alien continually tries to break into it. The reason the tension is so evident in this situation is because we care enough about this individual to hope for a positive outcome. We as the audience want something and the movie makes us feel like we won’t get it. And there you have it: tension.

I also definitely want to acknowledge the locations. It’s really cool because this whole movie takes place within a few blocks of an urban community in London yet the variety of places where the scenes were shot led me to the point where I forgot how small the world of this film actually is. For instance, there are a bunch of walkways for pedestrians around this block. They seem to have many different levels along with overlapping bridges. This majorly contributes to a chase scene later in the movie. The change in levels not only contributes to a natural feeling of uncertainty, but also presents many opportunities for surprise elements to come in and throw everything, including our expectations, off track.

Going off of that note, it was pretty easy to become engulfed in the world of the film because it started off on a super hot note. The aliens pretty much started invading in the beginning of the film so that factor was continuous throughout the entire project. Also, most of the main characters in the movie are teenagers so of course they won’t go about situations exactly how experiences adults would approach them. So when they react to certain things in a way that may seem counterproductive or juvenile, it is justified. I found my head empty of questions like, “Why are they doing this?” and statements such as, “that’s stupid” because of the age of our heroes. A nice juxtaposition to this is when Sam starts showing up on screen more and the age gap with the others becomes more relevant. The older Sam and the younger boys start to have a nice give-and-take dynamic that is discovered and developed in order to survive the invasion.

All in all, this movie was quite enjoyable. It doesn’t take itself too seriously, but at the same time gives us reason to be on edge, which is a nice fusion for the genre.

Date movie: yes please! The story line is easy to follow and there are plenty of moments where it’ll be nice to cozy up next to someone on the couch. The combination of fascinating characters combined with the mystery ahead of them makes for a spooky and fun-filled evening.

One thought on “Music Box of Horrors | Attack the Block”