Minyan is about a Jewish family that immigrated to Brooklyn’s Little Odessa.  While the film is being released this year, it is set in 1986 when the Brodsky family is mourning the death of its matriarch.  The first scene of the movie is a portrait of the family wearing black and sitting shiva in the livingroom of the matriarch and her widower Josef.  Josef Brodsky is played by the American actor Ron Rifkin, who is also known for his role as Arvin Sloane on the drama Alias, and Josef’s grandson is David , the main character of the movie who is played by the stage actor Samuel H. Levine.  In 2017, I saw Levine perform in the Huntington Theatre Company’s “A Guide for the Homesick” which – like the movie Minyan – is a narrative that revolves around Samuel H. Levine as a young Jewish man coming to terms and peace with his gayness.

So yes, Minyan is a gay movie, and David’s sexual orientation is why he is suffering from a crisis of faith.  For the first half of this independent film, we see David walking through his neighborhood and life weighed down by a general air of silent malaise.  Viewers see David looking annoyed during religious conversations at school and, the sign of all signs that an introvert is suffering from inner turmoil and confusion, David picks food and fist fights with schoolmates.  But what is so heartening about this movie is how the Jewish community surrounding David continues to consider him “a good Yeshiva boy” – while also witnessing and accepting David’s sexuality as part of his Jewish identity.  In the end, Minyan is about David’s coming of age and self-acceptance as a gay man in his Russian family and Jewish quorum.

I liked Minyan very much.  Queer cinema is my favorite genre, and it is becoming a tradition that every summer on my birthday, I will pop corn and celebrate by rewatching Luca Guadagnino’s Desire Trilogy.  In some ways Minyan did feel like a Brooklyn version of the Italian Call Me By Your Name, with some super similar frames and visual messaging.  I had a similar viewing experience with both films, tingling with the same sensation of pride and swell of gratitude when both Jewish families – Elio’s and David’s – completely embrace the young men for who they are.  There’s a reason this coming of age tale is told by different filmmakers from different countries around the world:  Because coming of age as a questioning queer youth so frequently happens in this way of your family knowing before anything is ever stated and, secondly, sharing physical passion for the first time with a slightly older and more experienced member of the queer community.  Both Call Me By Your Name and Minyan gorgeously have depicted this universal story in similar ways. 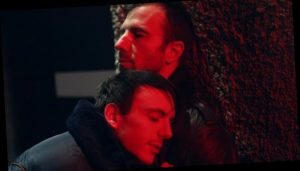 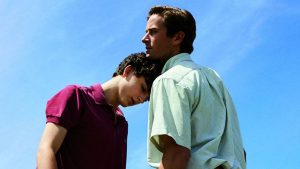 The aspect that I have most appreciated about Call Me By Your Name and Minyan is the pacing, which is deliberately unrushed in a way that made it comfortable for me to sink into these emotional and sometimes moody narratives.  With Minyan, I came to care about the movie because I came to care about David.  The camera is often so close to this character’s face and body, showing David’s attentiveness as he listens to his zaide’s wisdom about love and religion, showing David’s ecstasy as he experiences his first orgasm, showing David bravely utter the Mourner’s Kaddish for the first time at an elder’s funeral (which I felt was one sublime cinematic second), and showing David’s rage when he suspects one of his minyan members will become homeless ‒ a few instances during this film that is fundamentally about self-love, queer love, divine love, and familial love…  (Could someone please cue a Sufjan Stevens song?)

Here is a clip that shows David talking with his friend and zaide, the widower Josef.

Minyan is an understated film that could be easily bypassed during the Chicago LGBTQ+ International Film Festival, but don’t do that.  Stream and watch it with your household, because Minyan is a mature family film – with sexual content.  A film to see during High Holidays quarantine, it’s got strong Sukkot vibes of celebrating protection during difficult times.

Shana tova to the Jewish queer community and its allies!