Newell is known for his food-focused films. He uses food and humor to look at relationships through a coffee house in Close Quarters and dinner parties in Open Tables. He hasn’t strayed too far from the food scene. He was recently listed on The 14 Best Netflix Food Documentaries for directing, 42 Grams, about a couple serving 15-course meals from their apartment to pursuing the American Dream by opening up a Michelin starred upscale eatery in Chicago’s Uptown.

Chicago is known for its food scene, which takes center stage in Open Tables (2016), a romantic comedy where every table has a story. Featuring some of the most prominent Chicago restaurants, Open Tables includes Longman & Eagle, Scofflaw, Sunda, and Acadia.

Through exclusive dinner parties,  Open Tables explores colliding stories of love lost, love found and all the details in between. Over the 9 months of filming, the actors and staff truly lived-out the premise of the film, which was that “the people you eat with make a meal special – not the meal itself,” according to Newell quoted in IndieWire.

It stars notable Chicago actors including Desmin Borges (Living with Yourself, Private Life), who graduated from The Theatre School at DePaul University in Chicago, and David Pasquesi (Veep, Groundhog Day), awarded the 1989 Joseph Jefferson Award for Actor in a Revue for The Gods Must Be Lazy at the Second City Theatre. As well as, Joel Murray (Mad Men, Shameless, Vendors) who owns a restaurant near Chicago’s O’Hare called Caddyshack, and TJ Jagodowski (Get Hard, Computer Hackers).

“I’m excited that we have signed on with Cow Lamp Films to bring the film to new audiences that are going to love it. Open Tables screened very well across the country (and internationally) at film festivals to usually soldout crowds. It’s a great film to watch when you have friends over for dinner. Like a good meal, it’s a film that is made with a lot of love, and I’m looking forward to more people getting the opportunity to see it,” said Newell, Director and Writer of Open Tables.

The Chicago Tribune’s Nina Metz called it “dinner with a side of romantic tension.”

The full list of restaurants featured in Open Tables are:

Jack Newell’s movie, Close Quarters (2012), was also signed by Cow Lamp Films.  The film was 100 percent improvised. It explores life through two young baristas, who are forced to work an extra shift. They must come to terms with their own relationship while being bombarded by the very different issues of their diverse customers 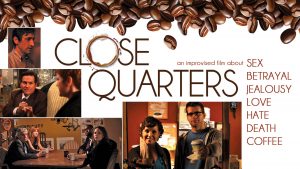 Close Quarters includes some of the same actors from Open Tables including  David Pasquesi andTJ Jagodowski, as well as other Chicago talent like Tim Kazurinsky (Saturday Night Live, Police Academy), who was nominated for BAFTA Award and WGA Award, and appeared on Broadway in critically-acclaimed comedy, An Act of God, and Greg Hollimon (Strangers with Candy, The Fugitive, Black Magic).

The production built a coffee shop in an abandoned storefront at Sheffield & Barry in Chicago – over the course of the 11 day production, they had 127 people interrupt shooting because they thought the coffee shop was real. No coffee was served to these people, but maybe a few laughs.

“It’s fitting that we are distributing Close Quarters through Cow Lamp Films because it’s a uniquely Chicago Film – we embraced the Chicago art form of improvisation when we made this. The film is completely improvised and features the best improvisers on the planet earth. Cow Lamp is the best Chicago-based distributor and so it’s a marriage made in Chicago-Heaven. Close Quarters is the hot dog, Cow Lamp films is the mustard, “ said Newell, Director of Close Quarters.

Jack C. Newell is a Chicago-based, award-winning writer, director, producer, actor, and public artist. He is the Program Director of The Harold Ramis Film School at The Second City, the co-creator of Destroy Your Art, and the co-creator of the public art project, The Wabash Lights.