The Holidays Are About More Than Just Die Hard

It’s been established time and time again that Die Hard is in fact a Christmas movie. When people bring it up in question I become completely silent. There’s nothing I can say that hasn’t already been said hundreds of times. If someone is trying to refute Die Hard’s very apparent yuletide joy they are more than likely aware of the overwhelming evidence and are deliberately looking the other way. It’s even been noted that Die Hard has a few more Christmas elements than Michael Curtiz’s 1954 musical White Christmas. I’ve provided here a checklist made by Die Hard screenwriter Steven de Souza comparing the two. You’ll notice that Die Hard features more “jolly” or “Christmas-like” attributes while White Christmas actually has a far higher body count and a more terrifying ringleader. 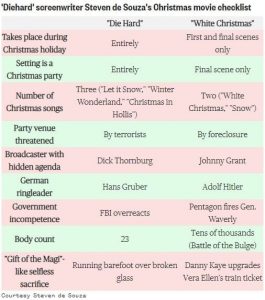 I’m bringing this up because it’s time we figure out what it means to be a Christmas movie. It’s important that we nail it down because as we go about our daily lives evil people over at Disney are trying their hardest to make Star Wars a Christmas tradition. Since The Force Awakens released in 2015, four out of the five Disney made Star Wars films have been released in the weeks leading up to Christmas. This is going to take away valuable ticket sales for other movies that don’t want to compete against the disgusting behemoth that is Micky Mouse and his Star Wars cronies.

I have a hard time figuring out what makes a Christmas movie a Christmas movie. Obviously Die Hard is on the list and so is White Christmas. But the list can be quite lengthy and genre filled. It’s a Wonderful Life and Gremlins are two of the best Christmas movies ever made and they’re tonally opposite. Most people want to feel a sense of warmth, togetherness, and joy by movies end. They want to see their hero pull off some miracle or selfless act right before the buzzer. Afterwards they get to celebrate with their friends and family in a comforting atmosphere. Most Christmas movies do this. In Jingle All the Way Arnold Schwarzenegger plays a father who’s too focused on his job and doesn’t spend time with his son. Throughout the film he risks injuries and felonies in order to get his son the perfect gift. In Kiss Kiss, Bang Bang Robert Downey Jr. plays a thief from New York City who winds up solving an elaborate crime and saving a childhood friend along the way. In both of these films the protagonist goes from being self absorbed and winds up helping other people. Watching a character go through these changes is like telling a kid “it’s not about the gifts you get, but rather, the gifts you give.”

This isn’t always the case. Bob Clark directed Black Christmas in 1974. An early slasher film that predates and inspired John Carpenters Halloween. Its about a murderer sneaking into a sorority house and killing off college students as they’re leaving for winter break. It isn’t joyous, familial, or heartwarming. But it’s an established cult classic directed by a talented film maker. Ten years later Clark would go on to direct another cult classic Christmas movie, A Christmas Story. Clark has demonstrated that there are fewer rules than we thought when deciding what is and isn’t a Christmas movie. Christmas movies don’t inherently need to inspire warmth, joy, or gratitude, though it would be nice, all they need to do is be either relatable or comforting or both. 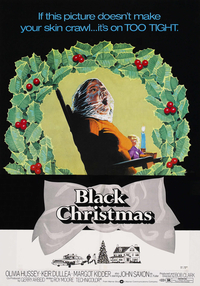 These are things that you need to keep in mind when you bring up Die Hard. Christmas is a difficult time for some people. There’s a lot in one persons life that can get in the way of yuletide joy. In Die Hard John McClane has to fight literal terrorists before he can reunite with his family and celebrate the Holidays. The Sorority Sisters in Black Christmas have to escape the clutches of a sadistic serial killer while they’re studying for finals. Regardless of the Holiday season the good guys don’t always win.

The breadth of genre of Christmas movies shows that people handle the Holidays differently. There isn’t one right way to celebrate and there isn’t one right way to think or express your emotions about the shorter days and the colder weather. If Star Wars becomes an extension of Christmas then we’ll be further trapped in a false expectation of how we should celebrate. John McClane didn’t fight for this reality, and the girls in Black Christmas didn’t get murdered for it either. They did those things because people deserve variety for their holiday celebration and so do you.