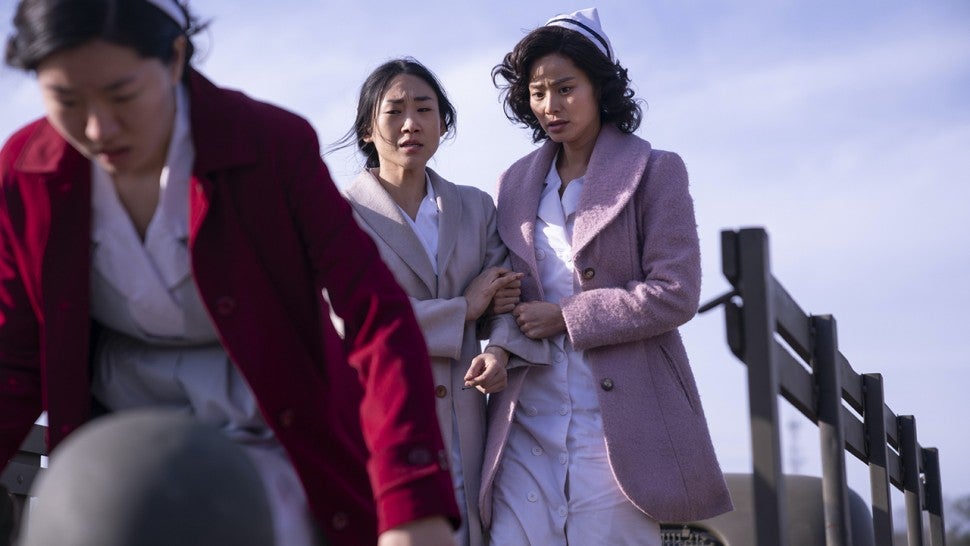 This sixth episode of Lovecraft takes a break from Chicago and heads back in time to Atticus’ tour in South Korea.  Ji-Ah is a Korean nurse who treats wounded American soldiers, and this is how she becomes the love interest of Atticus during the Korean War. Not only is Ji-Ah a nurse, she is a woman who wants love, which she finds with Atticus.  We see Ji-Ah reading “The Count of Monte Cristo” to Atticus because his glasses have been smashed, and Ji-Ah and Atticus also bond over the notion of war causing sane people to commit insane acts.  Tic even manages to get a 35mm print of a Judy Garland movie – sent by Uncle George from Chicago – for Ji-Ah to view in private with him on their first date. This romance gets to the point of commensuration when, before they make love, Tic reveals that he’s a virgin.

Setting this episode in the misdst of the Korean Conflict was an accurate reflection of social divisions in Chicago and America at-large.  Similar to Episode 4 “A History of Violence,” this is another episode that comes down to the daily life of a family interacting.  Ji-Ah’s personal history is horrific — her stepfather sexually abused her, knowing that Ji-Ah’s mother may look the other way in exchange for status.  But fed-up and wanting to protect Ji-Ah, her mother makes a deal with a shaman and summons the kumiho monster to kill Ji-Ah’s stepfather, not knowing the full price Ji-Ah would have to pay:  Until Ji-Ah takes the souls of 100 men, she will remain a kumiho, harboring underneath her skin a nine-tailed fox spirit summoned to dwell in the form of a beautiful woman in order to take revenge for the crimes of men.

Out of all the Lovecraft episodes, this one revolving around Ji-Ah is the most time we spend exploring personhood, unity of the spiritual and corporeal.  Questions that philosophers address about personhood are:  What distinguishes persons from non-persons, and what makes this person at one time the same person as that person at another time? Within the context of “Meet Me in Daegu,” Ji-Ah is constantly struggling with these two questions from the first second of the show to the last, and when Ji-Ah and Atticus first begin to make love (around 44:00), viewers watch this struggle play out on Ji-Ah’s face as she tries to distinguish the woman who cares for him from the nine-tailed kumiho who wants to kill him.

This sixth episode did not offer room to breathe or to become comfortable, especially with the backdrop of the Korean War and constant threat of combat, with Ji-Ah’s anger over Atticus killing her best friend, and with Ji-Ah and Tic torn up after committing monstrous acts they can never ever undo. Because “Meet Me in Daegu ” is backstory, Ji-Ah is actually the inception of Atticus as we have come to know during the five previous episodes. Yes, I may’ve been underwhelmed by this segment, but in a way everything starts with Ji-Ah. Her mythological experience kicks off Atticus’.  Atticus, Leti, and the entire Chicago crew recognize that fact, and their actions in the upcoming episodes embrace Ji-Ah as family.

For me, one of the most moving moments of dialogue in cinema is Kate Winslet as Clementine whispering “Meet me in Montauk,” Joel’s last yet indelible memory of Clementine before their relationship is erased.  I won’t go too much into it, and upon first thought it may seem like a stretch but – beyond their similar titles – I think there are other strong parallels between Clem’s “Meet me in Montauk” and Misha’s “Meet Me in Daegu.”  Clem wished Joel had stayed, just as Ji-Ah wished Tic had stayed.  Remembering back, Joel says “Now I wish I’d stayed,” and maybe Atticus wishes he had stayed in Korea instead of returning home to fulfill a prophecy of death.  Both men felt like “scared little kids” before running out the door.  And I could go on and on…  But mostly, just like in Eternal Sunshine of a Spotless Mind, “Meet Me in Daegu” is about remembering an old love before returning to that connection. I found myself missing the setting of Chicago and missing Leti in particular, but by its end this teleplay firmly positions Ji-Ah as integral to the Lovecraft story.  From this point on Ji-Ah features in the remaining four episodes, until playing a super significant part in the climactic finale.

Routinely, I end Lovecraft reviews suggesting something to watch.  I think every Lovecraft fan needs to rewatch this sixth episode, because there is so much subtlety that many of the details probably got overlooked.  While this episode won’t please anyone who has not enjoyed the show’s tonal shifts, I perceived and appreciated this episode as a bold attempt by showrunner Misha Green to move past a history of animosity between Black and Asian Americans.  This was shown in the conversation when Atticus explains to Ji-Ah: “It’s just – the only way we’d meet Judy Garland is if I was her butler or he was her chauffeur. …… In America, colored folks are treated differently. We’re made out to be an enemy in our own home” (36:00).  Atticus uses “we” as a term of solidarity against white supremacy.  Subtle moments like that make it all-too easy to overlook this episode as the common ground that it attempts to be between Blacks and Asians.