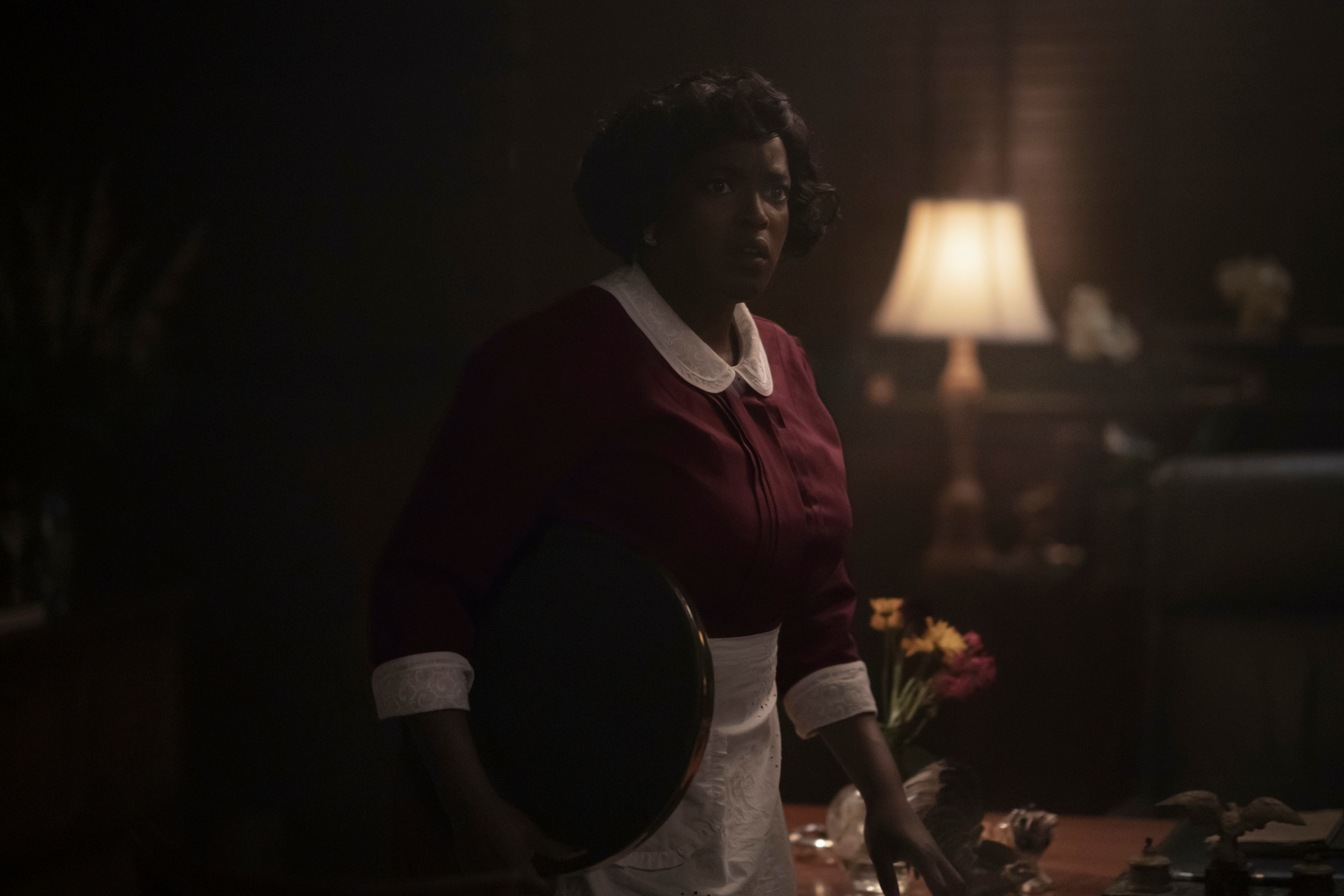 Warning:  This (very belated) article contains spoilers for Lovecraft Country in general. The series’ fifth episode “Strange Case” contains images of gore, as well as scenes of transphobia and rape.  There are also scenes of consensual sex.

In Lovecraft’s first episode, Montrose was kidnapped and rescued from Ardham Lodge by Uncle George, Tic, and Leti.  In that episode, Leti knocked out the Lodge’s security guard, a white woman named Dell (Jamie Neumann).  In this fifth episode “Strange Case,” we are in Chicago where Ruby Baptiste (Wunmi Mosaku) transforms into the physical form of that woman Dell. Early on in the episode we see Ruby (in the shape of Dell) at Christina and William’s home, writhing in pain while William ‒ with a dagger ‒ peels off the cocoon of Dell’s white skin, under which we see Ruby’s brown body.

In “Strange Case,” Ruby learns magic is real and revels in shapeshifting. Important parts of this episode highlight how supernatural powers could be used for evil purposes, but how our main characters hope to follow the Right-Hand Path and transform evil into benevolent white magic.  Ruby, Leti, and Tic all are young magicians, who enter into deals and relationships without really knowing what they’re agreeing to or whom to completely trust.  In this episode, we see them interacting with supernatural powers with the hope that they can heal themselves, their families, and social problems.

Almost one year since first airing, this episode of Lovecraft undoubtedly remains one of the most disgusting, brilliant, and glorious celebrations of gore on television.  A subgenre of horror, gore focuses on graphic portrayals of violence and bloodshed, and there is definitely alot of both in “Strange Case.”  But much more than messy splatter, the social commentary of this episode comes from the perspective of a Black woman navigating American society, and to watch this episode is to soak in Ruby Baptiste’s narrative.  Hers is the racial and gendered watching experience on offering.

From Ruby stepping into a cohabiting and sexual dynamic with Christina / William, to Tic deepening his commitment to Leti, “Strange Case” is a character- and relationship-driven episode.  But at the end we end up refocusing on the plot when Tic decodes the Language of Adam into English, panicked because the message is D-I-E.  Then credits begin, and we see the one and only Cheryl Dunye has directed this episode.  Dunye’s work focuses on race and sexuality, making her the perfect director for this episode. I’ve been a fan of Dunye’s since her 1996 debut Watermelon Woman.  OOOOh the days of walking to the neighborhood video store and renting Watermelon Woman for another weekend…  Like “Strange Case,” Watermelon Woman examined the often contentious dynamic between black and white women.

In the magazine Q Voice News, Cheryl Dunye discussed experiences and motivations that went into directing “Strange Case.”  Here is an excerpt sharing how she thinks this episode mirrors life for Black people and the LGBTQ community:

If you’re interested in learning more about the Liberian-American film director Cheryl, definitely check out this interview.

So in this episode we’re graced with Cheryl Dunye‘s esteemed reflections on the intersectionality of race and gender in a Black woman’s life, and we get very contemplative dialogues, like when when Ruby shares with William “I don’t know what is more difficult, being colored or being a woman.” (18:20)  Then…  Then!  As if Cheryl Dunye isn’t a treat enough, we get downright spoiled when the show’s ending song is Nina Simone’s “Sinnerman,” remixed by Felix da Housecat.  Yes, this episode could’ve fallen flat with its meditations on the ethics of magic and its look at characters’ deep sadness, but Cheryl and Nina demand that visibility be accompanied with respect for a person’s inner resilience – not pity about external obstacles, thanks.  As both Ruby and Tic reconfirmed in this episode, it is not easy to be a Black American – and even more so in the 1950s – but they do not want to die; they want to live.  With Cheryl and Nina shaping my final impression of this episode, I clicked off my roku with the shifted mindset that – by watching and staying with this quite heavy episode – I had chosen to be a witness and an ally to Ruby amidst the womanist woes happening within her life.

I remember how overwhelming it was when mainstream media was dominated by white men or their perspectives; and when the government was less diverse.  (I don’t speak about Barack, Michelle, and Kamala – in order to protect my love for them.  It is not debate about politics.  It’s something that’s very personal.)  It was shocking when recently I tried to watch a show that astonished me and others with its outdated casting and character development.  Those showmakers did not seem to realize times have changed.  Because of DEI, the 2020s are here and reformative, and this fifth episode is a triumphant BLM moment when the sturdiest of viewers receive valuable social info from the perspective of a Black woman. It’s intense and unapologetically painful. That’s what you can expect. That is why I recommend “Strange Case.”

If you have already watched this episode, you can catch Wunmi Mosaku in the crime show Fearless on Prime Video.