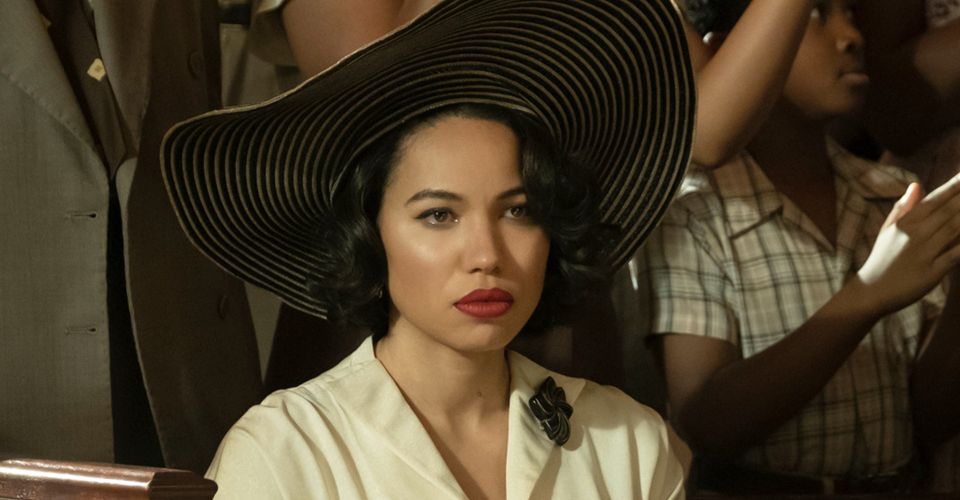 * This review contains the word negro.

Lovecraft Country is a series that kicks off with Atticus “Tic” Freeman traveling across 1950s America in search of his missing father, a journey that involves learning secrets about the fictional town Ardham, MA.  By the time of this third episode, Tic and his family are back in Chicago, IL ‒ where they are harassed by white neighbors and police officers.

The first season of Lovecraft is chock full of death, as is this third episode “Holy Ghost” ‒ which opens with Letitia “Leti” Lewis attending George’s funeral. Three weeks after the funeral, Leti receives an inheritance from her deceased mother to purchase a dilapidated mansion in an all-white neighborhood on Chicago’s North Side, filling up the house with Black renters together with her older half-sister Ruby Baptiste. Leti also discovers other tenants ‒ several ghosts. She quickly finds out that her new house is haunted, and she has to deal with supernatural activity.  Leti learns that the last owner was the white scientist Hiram Epstein.  Abetted by the Chicago police chief, Hiram Epstein experimented on and killed Black residents from the city’s South Side, before burying them underneath the house. Now these spirits ‒ including Epstein’s ‒ are trapped on the property.  With help from a medium and the Black spirits, Leti banishes Epstein’s ghost.

The climax scene of Hiram Epstein’s exorcism is very intense, in a good and necessary way.  Actress Jurnee Smollett becomes her character Leti.  This third episode is a turning point for Smollett, who becomes the cast’s character actor who continues to shine brightest for many viewers throughout the rest of the season, transforming the supporting role she had in the first two episodes, and filling out Leti’s presence from the girl who was not allowed to drive (in the first episode) and the woman with either amnesia or sad memories (in the second episode), to a magic wielding shaman whose strength is that Leti might possibly be half alive while also half dead (a suspicion that remains unconfirmed).

When our protagonist Leti overcomes the external obstacle of Epstein’s malevolent ghost who still believes the house is his, the exorcism not only transforms lionhearted Leti into a leader of Chicago’s South Side, but it also emancipates the spirits of the Black victims experimented on and murdered by Hiram Epstein.  Although, in the beginning of this episode, Ruby reminded viewers that Leti’s had a history of being dishonest, unreliable, and financially irresponsible.  By the end of the episode, home ownership became a step forward in the personal development of Leti ‒ and for the community.

Lovecraft is available on streaming services.  With subscriptions, you could watch it on HBO Max, Hulu, Amazon Prime, and YouTube TV ‒ $6 to $65 per month, depending on service and plan.  If you have regular ol’ YouTube, each episode costs $2.99.  And you’re already taking a first step to really relishing the horror in this third episode: You’re reading this review, and you should read other reviews. Chicago-based writer Michael McDunnah, known online as the Unaffiliated Critic, is an insightful commentator on Lovecraft and especially of this third episode ‒ perhaps more than anyone else who has written about it. McDunnah superbly massages into the deep tissues and roots of this episode, so please read his article. What I will point out here, as you prepare to (re)watch “Holy Ghost,” is how the episode begins with a Baptist service and eventually ends with another Black spiritual experience.  Those are some conventions in the supernatural horror subgenre, which encompasses all of the monsters and terrors that are somehow involved with religion and ritual.

This episode is compulsively watchable because, at the start of each scene, we’re never totally sure what is happening, so we watch and wonder, waiting and wanting to figure out what’s going on. We get some answers fast enough, but by the next second or scene, we have yet another question:  Why does Leti’s party guest say that Martin Luther King Jr.’s first name had been Michael?  Why does the ouija board, another prop of supernatural horror, predict that Dee’s friend Bobo won’t have a good trip? Every second offers mystery. While the Unaffiliated Critic complains this episode strives for too much ‒ the pacing too quick and clever ‒ I enjoyed that about “Holy Ghost” (and the other Lovecraft episodes).

Let me promise y’all something:  This review of mine does not scratch the surface of Lovecraft Country’s third episode, “Holy Ghost.”  I watch a lot of tv, as absorbing and analyzing are my hobbies, and I can confidently say that I’ve seen a lot of the same things.  However, after my first time watching this episode, the boundaries of my imagination and visual vocab expanded.  I saw some images that I didn’t even know I had been yearning to see.  I saw things that made me feel healed, as an African-American cinephile and as a woman critic.  Starting back in 1965, 24 percent of Black infants (compared to 3.1 percent of White infants) were born to single mothers, and every year since then, about one million more Black babies have been born into fatherless families. Rephrased more broadly, not connected to paternal lineage, millions of Black folks do not know half of their heritage.  So the end of “Holy Ghost,” when we see Leti holding hands with and doing a ritual with Black spirits ‒ and I’m going to say Black spirits; if you need to get pedantic about the term, please do it somewhere else ‒ when we see Leti crossing the veil (again) in order to carry out spiritual warfare with the Black spirits, I teared up.  Reconnecting with one’s legacy in ameliorating ways matters ‒ for the living as much as for the deceased.  “Dead negros’ grief” is a central part of Black American heritage and imagination, and it is something that I felt deeply while watching this episode, and it is something the Unaffiliated Critic mentioned in his own review.

At the end of “Holy Ghost,” I was left wondering if the namesake of this third episode is Leti, but that is one of those question which will not be answered until next season.  In the meantime, while watching the events of this episode ‒ which function to give Leti the strength she needs to be Atticus’ partner is magic and marriage ‒ you too should get ready to fall in love with Leti, and don’t be surprised if Smollett wins an Emmy in June for her unflinching performance.

Jurnee Smollet’s been professionally acting since the 1990s, and if you would like to see her in other productions, then you have several to choose from.  In 1997 as a young performer, Smollett won two awards for her perfomance in Eve’s Bayou.  Then in 2008 as a teen, Smollett earned herself an NAACP Image Award for outstanding acting in The Great Debaters.  Now a young woman with almost three decades of experience under her belt, it is no wonder she can take our breath away in Lovecraft Country and especially in this third episode “Holy Ghost.”  When I write takes our breath away, I mean Smollet electrifies this entire episode.  From the car smashing scene to Epstein’s exorcism (both events overlayed with traditional Black church hymns), we cannot and do not want to take our eyes of this spiritied actress.

Thank you, Mrs. Smollet!  Until next week, wooooow 2021; big luv and solidarity from the southside of Chicago. ~B