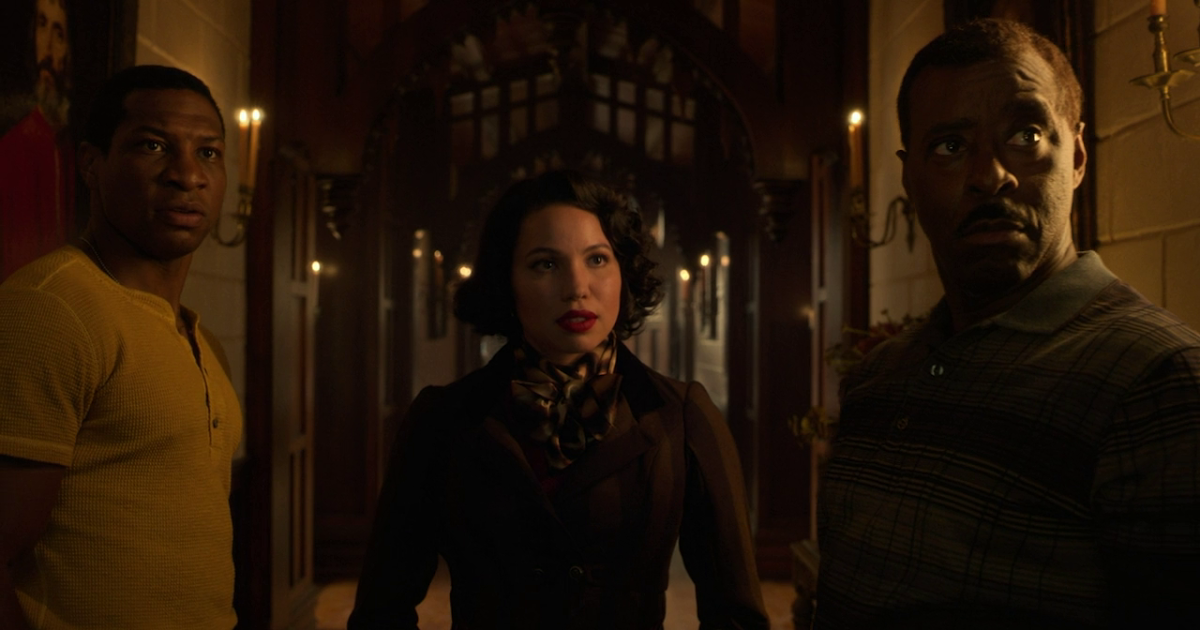 The second episode of Lovecraft Country is titled “Whitey’s on the Moon“.  It starts with William welcoming Atticus “Tic,” Leti, and George to a mansion, which William explains is Ardham Lodge.  The Lodge was designed by Titus Braithwhite, a slave trader and the founder of a society of wizards. George realizes Tic is a descendant of Titus and thus a premier member of the society; thus an untrained wizard. Samuel Braithwhite (Tony Goldwyn) is the current owner of the Lodge and leader of the secret society. Because of Tic’s heritage, Samuel has plans to sacrifice Atticus in an upcoming ritual.

The second episode of Lovecraft Country is rated TV-MA for adults and is preceded by a message warning viewers of foul language, nudity, sexuality, and violence ‒ all of which was portrayed in the first episode and alluded to in my first review.  For example, the first episode opened with Atticus fighting in the Korean War, but man-to-man combat is seen as heroic, and nudity we saw in the first episode was positively sexy.  However, caution is warranted before the second episode of Lovecraft Country, which is funnier than the first episode while being more offensively violent, a super tricky dynamic that exposes the complexity of Atticus and the other main characters in this episode ‒ Leti, Uncle George, and Montrose.  In this second segment, Atticus is aggressive or violent to three women characters. We see Tic beginning to sexually force himself onto Leti. We see him beating down a Korean woman soldier (as Tic remembers another Korean woman he shot point blank during the War).  We also see Atticus angrily arguing with his cousin Christina, although she is actually in the wrong.  This whole second episode forces everyone to question the credibility of Tic as our remarkable, trustworthy, and courageous main character ‒ from Leti and Uncle George wondering if Tic is suffering from PTSD, to some feminist viewers cringing and questioning “Did Atticus just try what I think he tried to do, and to our Leticia?!?!”

In Lovecraft, no person or character is one thing, and that is one difficult message of this second episode.  Especially since upcoming episodes reveal how this family’s magic includes shapeshifting, so being more than one thing is a not-so-obvious truism to be remembered during the show.  Yes, Tic’s proven he is devoted to family.  Tic is violent too. Yes, Tic is black and has brown skin.  Tic’s white too.  Both sides of Tic’s family wield magic in funky ways creating complex characters in an unpredictable, nonlinear experience of time.  This is a set of struggles the audience is set up to watch our complicated characters resolve, and not just over the first season, but also during the upcoming second season.

I’ve returned to Lovecraft Country to write these reviews, and there are alot of questions the writers leave us with, but I like that.  On top of being horror and magical realism, Lovecraft is a mystery that makes you ask what, when, and how?  I must watch closely, and I find the characters are more than worthy of my time and affection.  For my fellow viewers, there are a few details that can be overlooked, so I’ll point them out, since answers to these questions are significant:

This second episode deceptively presents as a simpler segment of the overarching storyline, but it isn’t.  It cannot be a filler episode with the family history it supplies, and it isn’t superficial at the end when Samuel Braithwhite carries out his ritual with Atticus used as human sacrifice.  With almost 870K viewers, the second biggest audience trailing the season finale, it’s safe to surmise this poignant ritual scene could be the show’s definitive mise-en-scène.  The brief but brilliant placement of Gil Scott-Heron’s “Whitey’s on the Moon” during the ritual was impeccable tv production!  (applause from my writing desk)  Even reading this review cannot prepare you for the first-time experience of watching the episode and then finally arriving at the ritual scene.  (Note: Please do not look it up on YouTube, as the scene’s impact derives from context; from having watched everything that leads up to the ritual.)  Lovecraft’s music supervisors, Laura Karpman and Raphael Saadiq, could not have done better with the soundtrack for this entire episode or the entire season.

I want to start wrapping up this week’s rave with some plaudits, praising three of the people who made this second episode so sensational ‒ the actor Tony Goldwyn as Samuel Braithwhite, American singer Raphael Saadiq, and Laura Anne Karpman. These three veteran artists have been working within their crafts for decades, and their participation in the making of Lovecraft Country no doubt helped to elevate the already high-quality of this influential television show.

Tony Goldwyn, from Ghost (1990) and Scandal (2012-2018), has his own interesting heritage.  His paternal grandfather was the movie producer Samuel Goldwyn who established Paramount, the fifth oldest surviving film studio in the world!  There is so much reputable Hollywood history surrounding the entire Goldwyn clan that whenever Tony is in something, his involvement places some extra gravitas upon the project.  And indeed, Goldwyn does a seriously scary job of briefly bringing to life the villainous Samuel Braithwhite, the white supremacist who currently owns Ardham Lodge.  Unlike the complexity we witness within Atticus and his family members, Samuel Braithwhite is straight-up hateable ‒ period ‒ and it is an opinion that is even shared by Tony Goldwyn himself who told the Hollywood Reporter:  “Samuel Braithwhite is someone who feels totally entitled due to his birthright, and his lineage, wealth, and power to feel intellectually superior to all other ethnicities and social strata. He views himself as a member of the master race, and he’s really committed to cultivating that in this whole fantastical mission, which he takes to the extreme in terms of immortality. You can line that up so nicely with the Aryan notion of the Final Solution.”  Tony Goldwyn is progressively political, and his embodiment of Samuel Braithwhite clearly seems to be Goldwyn’s way of publicly denouncing his character’s extreme racism.

As for Laura Anne Karpman and Raphael Saadiq, their work with this season’s sound saturates Lovecraft Country with aesthetic richness.  Karpman has won four Emmys for her work in tv, film, theatre, and video games.  I don’t know much about her Ask Your Mama, but it seems to be an inventive work of oral history that I’ll need to check out.  As for Raphael Saadiq ‒ a reverential pause while I momentarily reminisce ‒ I grew up with my own mama playing Sadaaq’s American soul group Tony!Toni!Toné!, up loud on repeat.  Having musicians so experienced and extremely talented, it’s no wonder the meat of this second episode was its score.  I mentioned Gil Scott-Heron, but Leon Bridges’ “River” might be an even brighter illumination of another moving scene.  Again, it is such a pleasing first-time viewing ‒ to echo Christina ‒  that when Leon Bridges cued in, I remember closing my eyes and nodding my head in the grateful “oh no they didn’t” way.  I cannot emphasize enough how beautifully Karpman and Saadiq wove music throughout Lovecraft’s moving images.

For such subtle and mature presentations of magic and matriarchy (both connected by the ancestor Hanna), “Whitey’s on the Moon” is also one of the easiest episodes to watch in this first season.  Partly because it’s mostly set within one building.  Upcoming episodes include travel and adventure, plus exploration of different cultures and foreign languages.  Upcoming episodes had me on the edge of my seat, hands flailing as if characters could read my nonverbal gestures, screaming “Noooooo!” and “Waaaaaait!!” and “Oh my gosh, really?!?”  But this second episode, nah ‒ it’s a quiet gem.

If you have already watched Lovecraft Country but want more jazz poetry by Gil Scott-Heron, who was born here in Chicago on 1 April 1949, there are some videos online with Scott-Heron talking about poetry.  One video is below, but there are more.  Anyway ‒ until next week, goodbye 2020; hello 2021; and big luv from the southside of Chicago.  ~B