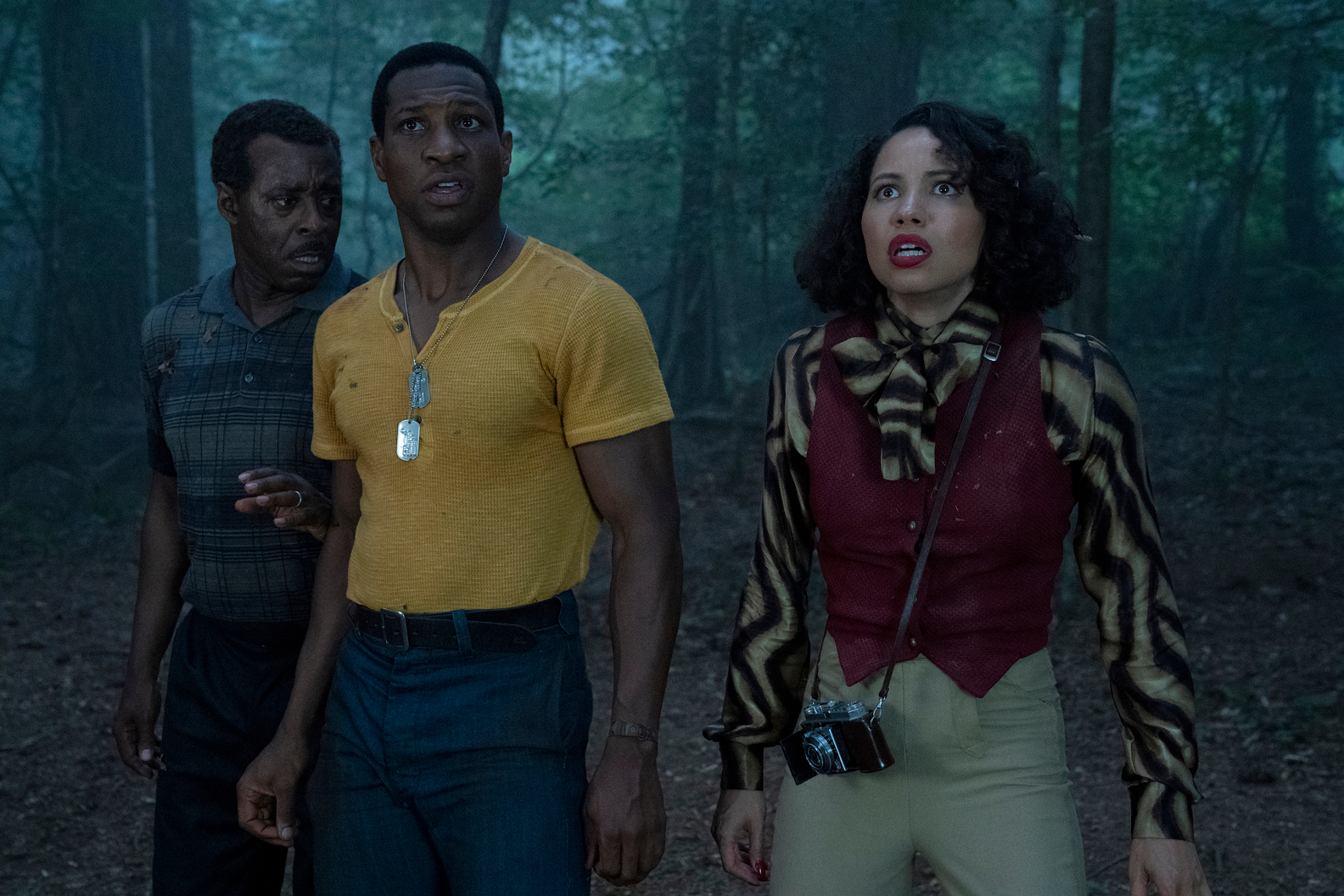 Lovecraft Country (2020) is a horror drama television series that was developed and written by Misha Green who has a background as a writer for Heroes (2006-2010) and Sons of Anarchy (2008-2014).  It’s important to note this is the first show that Misha Green developed.  Lovecraft Country is Misha Green’s debut.  She made it for you.  Misha made it for me.  She made it for every eye devouring its supernatural sweetness in a grateful gulp to sate our thirst for speculative fiction from a Black American perspective.  With its all-around perfection — from writing to acting, production design to historical atmosphere — Lovecraft Country is a bona fide piece of visual art.  Also a signature HBO drama hallmarking the network’s high level of theatre quality television, Lovecraft is the successful brainchild of Misha Green, and I found myself watching with the same gratitude that I feel whenever I am at a gallery in the midst of a Kara Walker installation.

In this first episode, Korean War veteran Atticus “Tic” Freeman returns home to Chicago with a letter from his missing father.  In this letter, his father invites Atticus to discover their family legacy in Ardham, Massachusetts.  So Atticus sets off on a roadtrip to Devon County, Massachusetts with his Uncle George and his friend Leticia “Leti.”  A group of white men chase them out of the first town they stop in, and the Black Chicagoans barely escape.  Soon after they encounter the sheriff of Devon County who enforces the sundown law.  After sunset, the sheriff’s deputies force the travelers into the woods with the intent to lynch them, but the entire group is attacked by ferocious monsters called shoggoths.  Tic, George, and Leti fight their way out, but the police officers perish.  The next morning, the trio stumble out of the woods to find a large mansion, where they are greeted by a mysterious white man named William, who welcomes Tic home.

Presenting a theme of travel ‒ first across state lines and, in later episodes, through time ‒ something this first episode establishes is a reimagining of The Negro Motorist Green Book, an annual guidebook that was published from 1936 to 1966.  Lovecraft Country is set in the 1950s, and the show adds a dystopian depth to the deadly discrimination Blacks faced whenever traveling along American roadways during the Jim Crow era. By integrating supernatural monsters and intergalactic destinations throughout this first season, Lovecraft Country becomes a cosmic horror show that delighted and scared me.  (This is a tv adaptation based on a canon of original works by Howard Phillips Lovecraft. I had never heard of these books, but my interest has been piqued, and now I’ve got my reading resolutions for the new year!)

There are so many reasons for loving this show.  The soundtrack of hip-hop with old-school soul, plus monologues and spoken word by James Baldwin and Gil Scott-Heron, were some elements that made me catch my breath from surprise and gratification.  More than that, there’s a shift happening in the African-American community, which I’d suspect Black viewers are feeling and witnessing all around us: The painful and extremely awkward breach between African-American “bourgeois” culture and our history of slavery is closing.  Atticus can have slave ancestors and still be welcomed home to a mansion, without social discrepancy.  Atticus can be well-read and also street smart.  Atticus can be a Black nerd and still so fine – goddamn.  Glasses haven’t been so sexy in a long time…  These are a bunch of elements that were separate for a long time in the Black community.  You were one or the other; not both.  (For historical reference, google the Niggerati / Harlem literati to see how being a book smart African-American back in the day wasn’t easy.)  Lovecraft Country is another signal that the Black community’s in a historical moment of major healing — internally and externally.

“Clones” is a hip hop song smoothly woven into the first episode.

Those are some of the thoughts going through my mind while I watch and rewatch Lovecraft Country, analysing all the puzzle pieces that I hope Season Two starts putting together.  At its epic core, this is a Black television show.  At some points later in this first season, Lovecraft Country seems akin to the hybrid that would result if Beyoncé ever produced Stranger Things.  Folks I know who enjoy this show are Black Americans and/or anybody interested in the lived Black American experience.  When people cannot finish this first season — like when people cannot finish the novel Beloved because of its complicated and supernatural elements — honestly, I feel very disappointed in the person who tells me that.  I want to point out to them that they are missing out on the oft underappreciated genre of Black Magical Realism.  Because Lovecraft Country is a family saga at the highest level of fantasy, and it happens to be historical fiction too.

In my opinion, too many folks are bypassing this amazing show.  Because yes, its nonlinear storyline is abit messy and alittle weird, but categorically speaking, the Lovecraft canon of books are “weird fiction.”  While I adore every minute of the weirdness, I get that it might help to walk through some of the show’s preternatural strangeness.  So this is the first of weekly articles analysing each episode of Lovecraft Country, timed so that some of the articles are published during the course of Black History Month 2021, when we can break down the historical underpinnings of this show’s storyline.

In 1965, James Baldwin debated the question, “Is the American Dream at the expense of the American Negro?” and we hear a part of his speech in the this episode.

And if you have already watched Lovecraft Country but want to watch Jonathan Majors in another production, he has a supporting role in the drama The Last Black Man in San Francisco.  (Yah ok, I got a teensy crush.  So what haha.  🙂 )

Until next week, happy holidays; happy 2021; and big luv from the southside of Chicago.  ~B