Off the Beaten Path | Love, Death & Robots S1E6 – When the Yogurt Took Over 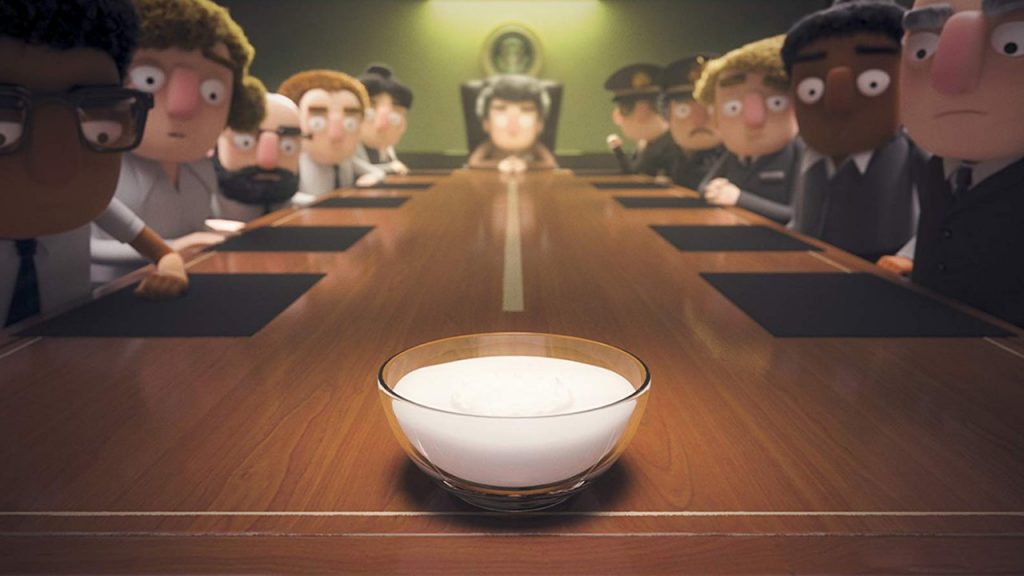 We’ve seen a lot in the last 5 episodes. There’s been balls to the wall action, thrilling suspense, humanistic drama, and classic horror. It’s about time then we return to some light but hilarious sci-fi comedy in episode six, When the Yogurt Took Over. Honestly, this episode is as ridiculous as it sounds. It’s a blast to watch and is easily my favorite comedy episode. The question now is, will you think so too?

When the Yogurt Took Over is based on the short story by John Scalzi (who also wrote Three Robots). The story starts with some sad looking scientists experiment with bacteria used to ferment yogurt. After numerous failures, some yogurt is taken home by a researcher for her morning breakfast. The next morning she finds something extraordinary happened. Not only had the yogurt had achieved sentience overnight, it immediately started solving world issues. The yogurt is taken to the president where it makes a single request. In exchange for solving the nation’s issues, the yogurt wants the state of Ohio.

Once firmly established in the buckeye state, the yogurt continues to evolve. It provides a swift solution for the national debt for the president. There’s only one caveat. The government must follow the instructions exactly, or the world’s economy will collapse. Naturally, the humans mess this up. True to the yogurt’s word, the world falls into financial ruin, except for Ohio.

The yogurt uses this opportunity to officially take over the world. It does this by offering to fix everything in exchange for supreme executive power. With no other choice, the humans acquiesce. A decade later, despite some initial protests, humanity is happier and richer than any time in human history. The episode ends with the yogurt beginning its colonization of the cosmos, leaving humanity nervous about being left behind.

Man do I love When the Yogurt Took Over. If you haven’t watched it, please do yourself a favor and do so. At a crisp 6 minutes, it’s such a fast watch. So, what’s to love about it? Well for one, there’s the animation. Provided by Studio Blow (also the animators of Three Robots), it’s a treat to look at. It’s essentially claymation done entirely with CGI. It’s not as good as the animation of Sucker of Souls and Suits, but it doesn’t need to be. If anything, it fits the story perfectly. The quirky nature of the animation complements the quirky nature of the story. The animation provides some great background humor. Most of all, the animation has no true direct comparison to the other shorts, heightening its uniqueness.

What truly won me over though is the writing. Seeing as they’re both comedies and based on stories written by the same author, I end up comparing this to Three Robots quite a bit. In Three Robots, we get a brief microscopic look at a world with equally brief glimpses and hints towards a macroscopic universe. Conversely, When the Yogurt Took Over takes an almost inverse approach. It starts at the macroscopic, chronicling the rise of the yogurt and the fall of mankind. Our only microscopic viewpoint consists of small comments and personal observations by the narrator (voiced by Maurice LaMarche of Pinkie and the Brain fame). Both approaches work in their respective ways. That said, of the two episodes When the Yogurt Took Over is better at deriving humor than Three Robots was.

Speaking of comedy, the comedy is incredibly tight. Almost immediately the narrator comments on how wildly absurd the premise is. It’s not an exaggeration to say the puns about yogurt overlords had me rolling on the floor with laughter. What carries the humor to the next level is the explanation of how such a dumb premise could happen. Everything that happens next is a series of absurdities, but it’s presented in a way where we can just lean in and accept everything without question.

When the Yogurt Took Over reminded me of Hitchhiker’s Guide to the Galaxy in the best of ways. It uses sci-fi as a vehicle to create absurdist humor in exceedingly mundane yet creative ways impossible otherwise. Utilizing the short runtime magnificently, the episode is stuffed to the brim with jokes from many sources. Some are provided by the narrator. Others are created by the background players and events. It gets to the point where you could easily be laughing non-stop until the credits roll. When the Yogurt Took Over also greatly benefited from not having any elements that stuck out, like the cat in Three Robots. Instead, it started with a mad sprint and maintained the same pace and consistency of humor until the end.

So in the end, the rewatch didn’t add anything new to why I loved When the Yogurt Took Over. That said, I still very much loved the rewatch because it gave me the excuse to experience this episode all over again. If I had anything to complain about, it would be the short run-time. Even so, I’m also glad it’s as long as it is because I’m afraid an increased runtime might ruin the joke.

I also get the feeling there’s something thematic going on, likely about the wildly different and self-defeating nature of man compared to the uniformity and successful yogurt. If so it’ll take another rewatch or two to fully pin it down. So yeah, watch When the Yogurt Took Over, preferably while eating some breakfast. As of now, it’s easily the apex of comedy within Love, Death & Robots S1, and shows just what greats heights sci-fi can take comedy.