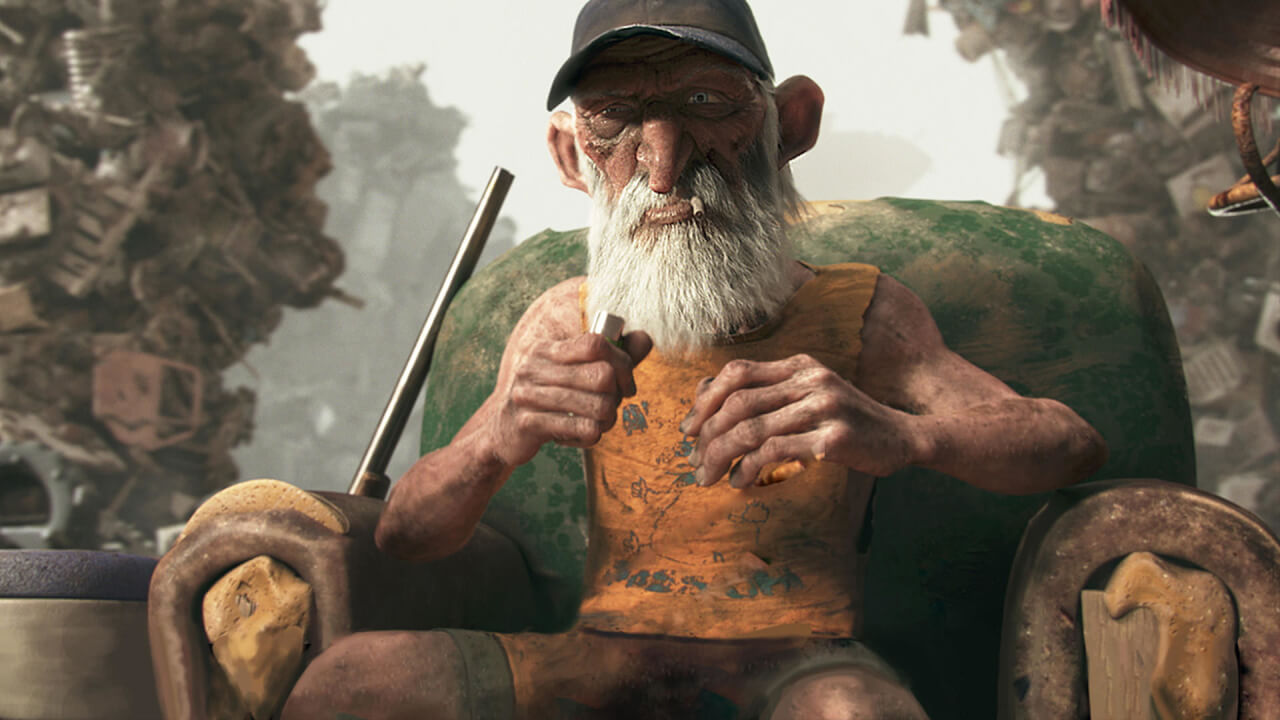 For the last three episodes, Love, Death & Robots S1 has been on a roll. We’ve reached the thematic heights of Good Hunting. We’ve plumbed the depths of existential horror with Beyond the Aquila Rift. We’ve marveled at the comic absurdities of When the Yogurt Took Over. Then there is The Dump.

The subject of this review, The Dump does not reach those heights. On the contrary, The Dump wallows in, well, the dump. I mean, it was inevitable the hot streak would end, but I’d be lying in saying I wasn’t disappointed in the episode. So let me explain why I found The Dump disappointing.

Based on a short story by Joe Lansdale, the story revolves around Ugly Dave Dvorchek, the white trashiest of white trash men who calls the eponymous dump his home. One day, a rather unpleasant city inspector – voiced by Gary Cole of Office Space fame – arrives at the dump to convince Ugly Dave to leave the dump so the city could remove the dump and begin condominium development. Surprising almost no one, Ugly Dave doesn’t take kindly to someone trespassing, let alone someone all but telling him he needs to vacate his home. After the initial hostility, Ugly Dave calls for his best friend Otto and spins a yard to the impatient inspector about how he met Otto.

The beast quickly ensnares Pearly and eats him alive before fleeing back into the dump. Ugly Dave pursues the beast in a forklift and managed to pin it against a fence. Right as he’s about to deliver the killing blow, Ugly Dave comes to a realization. The beast isn’t a beast. It’s more like a stray dog, given life by the dump and possessing the best of everything it consumes (people like Pearly included) while trying to live its life. In the end, Ugly Dave decides to keep the beast, given the name Otto, as a pet.

Back to the present, the inspector dismisses the story and once again asks Ugly Dave to sign the papers. Ugly Dave responds by asking Otto what took it so long. The inspector looks up at Otto with surprise just before Otto sloppily eats him. The episode ends with Ugly Dave celebrating not having to leave the dump by playing fetch with Otto using the severed hand of the inspector.

When I first watched The Dump back in March, I didn’t think about it much. This was because my mind was still on Good Hunting and Beyond the Aquila Rift. It was easily my least favorite of the three pure comedy shorts I had seen at that point, and it was quickly forgotten afterward. Watching it again the other day, my opinions didn’t really change for the better or the worst. It remained rather low quality. For some positives, I did like the design of Otto. It reminded me of the thing from The Thing – the dog coming out of the side of Otto is a dead-ringer – and Otto turning out to be the ultimate junkyard dog was an amusing enough twist.

The broad story structure reminded me of Pixar strangely enough, just made as trashy as possible. The junkyard resembles the junk planet of WALL-E and the present-day plot mirrors the beginning of Up when Carl is asked to move as he’s holding up real-estate development going on around him. The animation, provided by Able & Baker, is 3D CGI that does a good enough job at conveying how grimy the dump is, along with the design of Otto. Lastly, it’s clear The Dump was meant to be a breather for the emotionally taxing Beyond the Aquila Rift and Good Hunting. In that regard, it is telling us a story that doesn’t require real emotional stakes and investment, so in that way it works.

But those were all small elements, and for me, the negatives outweigh the positives. As soon as I saw the episode starts off with the inspector getting out of his car and stepping on a dead possum, I knew it wasn’t going to be a favorite (I’m not usually one for gross-out humor of this variety). From the beginning, there’s no real great character to root for. Everyone is at best a comedic sociopath at best and an unapologetic asshole at worst. The only real reason I garnered any sympathy for Ugly Dave, to begin with, is that he is somehow more pleasant than the city inspector (maybe Ugly Dave would have benefitted from an Up style early life montage?). The episode doesn’t go too far helping out Ugly Dave in this regard, especially when it ends with him gleefully playing with the severed hand of the inspector.

This brings me to my other big sticking point. The humor. The humor that follows is rather shallow trailer park humor that revels in being trashy at best, problematic at worst. I doubt many women would appreciate the implications of Ugly Dave treating a dirty sex doll as a romantic partner the way it’s portrayed. It reminds me of the situation of Sucker of Souls, wherein the episode lives or dies on if you consider the humor humorous. Unlike Sucker of Souls, The Dump doesn’t have anything else it could fall back on, so if you don’t like the humor, it’s going to be dead on arrival.

So to wrap this review up, I didn’t think too highly of The Dump. While it did serve as a breather episode after some truly heavy-hitting episodes, it was ultimately a one-note episode that lived or died on whether or not you liked that one note. Easily my least favorite of the comedy episodes so far, and one I don’t foresee revisiting in the future outside of a pre-season two rewatch of Love, Death & Robots S1.