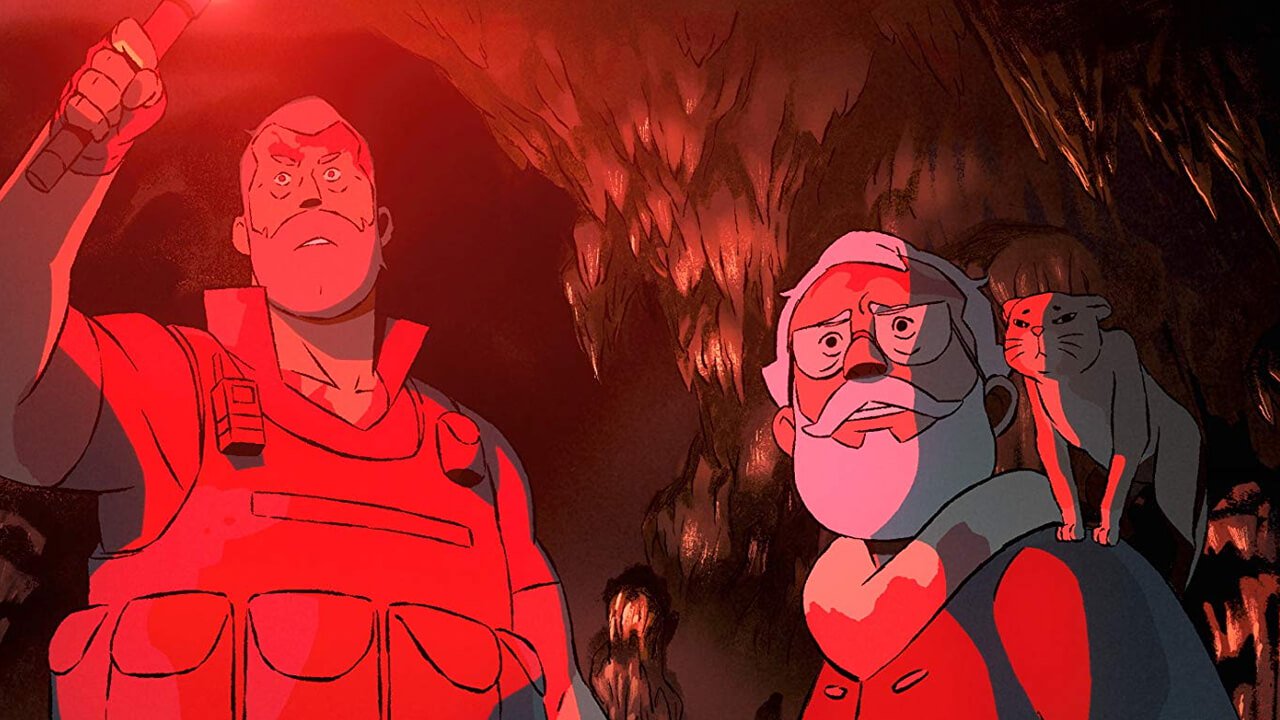 Man, I’m only 5 episodes in with this rewatch of Love, Death & Robots S1, and it already feels like I’ve covered a lot of ground both in terms of story and quality. Luckily for everyone, Love, Death & Robots is not a show where each episode is largely the same in style and content. Sucker of Souls is no exception. Sucker of Souls covers some fresh ground for the show by being both a 2D (fucking finally!) animated episode and a supernatural horror story. Now let’s decide Sucker of Souls is successful in this regard.

The story, based on a short story by Kirsten Cross, follows an archaeological expedition in the tomb of some ancient temple. The expedition includes scientists like chief archaeologist Dr. Wehunt, and  Wehunt’s research assistant Simon. The expedition also includes a team of battle-hardened mercenaries. There’s Flynn, the commander, and his employees Micky and Gary. The story starts in media res with Flynn and Wehunt fleeing from something unseen through some barely lit tunnels, both covered in gore from an unknown source.

It then cuts back a few minutes to show us exactly what the two men were fleeing from. Examining a freshly excavated tomb, Wehunt and Simon discover it belongs to an ancient Romanian being known as “the sucker of souls”. Flynn, the only mercenary with the researchers in the tomb, and Wehunt leave Simon alone in the crypt. Unsurprisingly to anyone who has seen any kind of adventure horror film, shit quickly goes whack. Simon is attacked and messily consumed by the sucker of souls, an ancient vampire lord.

The fairly normal-looking vampire morphs into a nigh-unstoppable monstrosity as it consumes Simon. Flynn and Wehunt barely manage to reach Micky and Gary at the gate of the temple crypt, using only their wits and a cat to aid them. The team must then left with a dilemma. Either they work out a way to kill the sucker of souls, aka the one true Dracula, or find a way to escape the temple before the beast breaks through the barricade.

Like Suits, when I watched Sucker of Souls back in March, I soon forgot about it. That is, I don’t recall disliking it. It just happened this episode got lost among all the other episodes I watched that night. Thus it was overshadowed by the episodes I immediately took to. I actually can’t even recall if I’ve seen this episode between my initial watch and my rewatch. Therefore, my review of this episode will be based solely on my rewatch.

Safe to say, it would take quite a story for this episode to reach the heights that Suits reached. Also safe to say, Sucker of Souls did not reach that. That said, it was still an entertaining episode, if slightly divisive. One positive that leaps at you as soon as the short starts playing is the animation. Provided by Studio La Cachette, it truly is unique compared to the first four episodes. I know I said that when I reviewed Suits, but I’m sticking with it.

Using some crisp looking 2D hand-drawn animation, Sucker of Souls looks like it could have come out of a horror comic book from Image Comics or Dark Horse Comics. It wouldn’t surprise me if initial viewers thought all the episodes looked like Sonnie’s Edge. Thus I’m happy the episodes have been embracing more types of animation than subtly different 3D CGI. So with that in mind, Sucker of Souls so far wins the prize for best animation.

But let’s talk about the real meat of the episode; the horror. As a horror fan, I always appreciate it when the creators take the time to understand what makes horror effective. For an immediate example, we can look at the beginning. Sure, it’s a classic horror setup to the point I’m sure anyone who’s seen a horror movie has seen something like this play out. That said it not only is highly effective at both setting a scene and tone but also makes us wonder just what exactly is lurking just out of sight. In other words, it’s a classic setup for a reason.

Normally, I’d like this unseen presence to remain unseen. I think too many horror stories give our fearful being a definite shape to attach our fears to. This is especially bad if the fearful being isn’t even scary in the light. Luckily the animators went out of their way to create a truly horrifying monster. I mean, I know for goddamn sure I wouldn’t want to face down the sucker of souls, even in broad daylight. Wehunt even points out to Mickey and Gary that the sucker of souls had taken on whole armies and won. Based on what we see, I’m inclined to agree.

Now you might be asking, I said earlier Sucker of Souls is divisive. The reason for that is simple; the humor. This episode mixes in a fair amount of humor on top of the action. There are the mercenaries, who are testosterone-fueled quip machines, and one of them is a woman. There are off the wall gags, like the reveal of the sucker of soul’s weakness to house cats. Side note, I looked that up, and contrary to Wehunt it is not a weakness of Dracula. There are even sight gags like Gary – the woman mercenary – shooting the sucker of soul’s penis off with a high powered rifle.

Now don’t get me wrong, there are plenty of great movies that mix even amounts of humor and horror (looking at you American Werewolf in London). I’m just not sure Sucker of Souls lands every joke. Like, my reaction to a lot of the humor was essentially “I’m not sure if I find this funny, but I could see this being funny”.

I will say though that, for the most part, the humor, while more on the bro side, isn’t outright offensive. If anything, I’d call it ham-fisted at most. To the creator’s credit, they keep the humor to the more action-filled parts of the story, so the humor doesn’t undermine the horror as much as you would think. So who knows, maybe on another rewatch the humor will hit home for me.

So to sum up my thoughts on Sucker of Souls, I’d say the horror and the animation make the episode, but what will determine if you truly like the episode or not lies with the humor. I don’t think I would put it at the front of the pack so far, but I’d put it solidly in the middle. It’s not going to change anyone’s world view or reshape how stories are told, but it’s an entertaining watch for the things it nails.