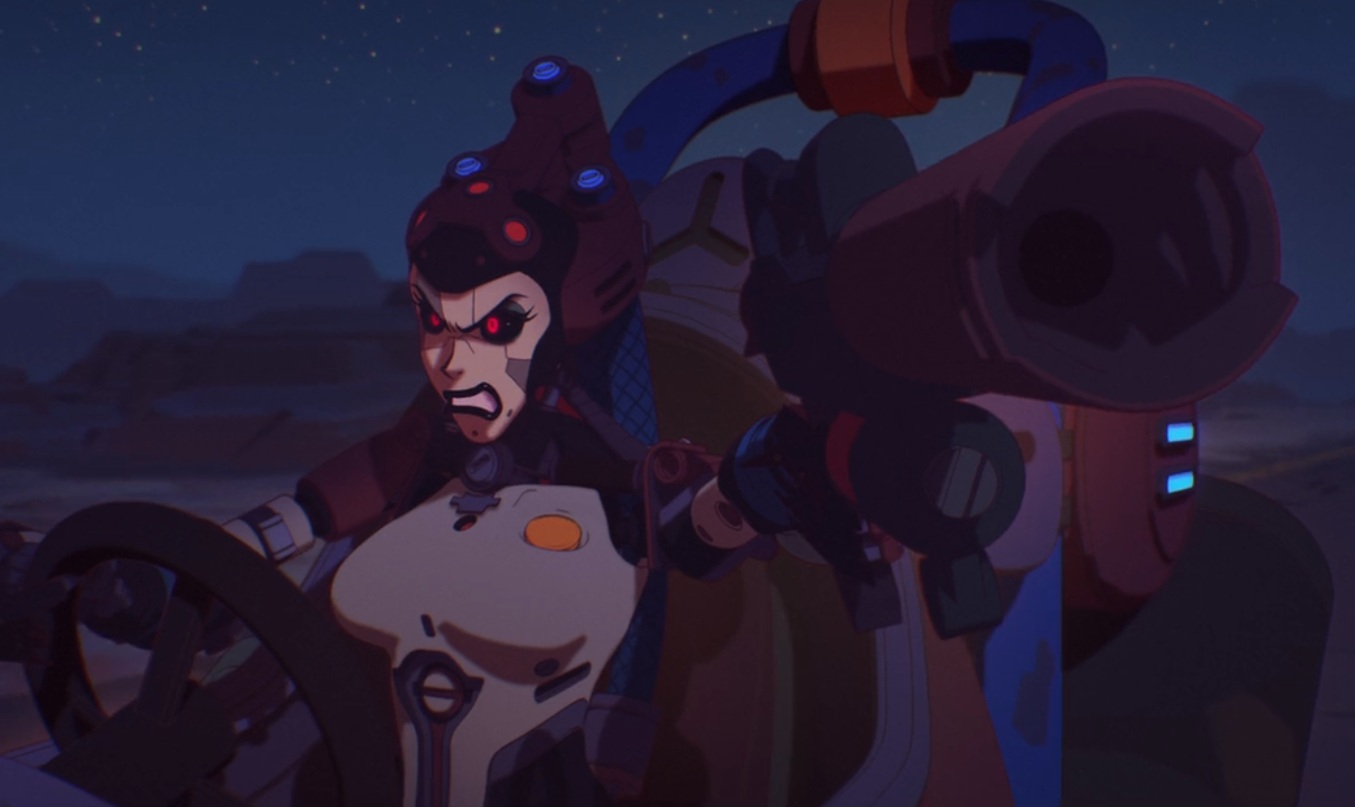 After 14 episodes, we’re finally onto the final four episodes of Love, Death & Robots S1, starting with the mini heist Blindspot. If I’m being honest, these episodes are the ones I didn’t watch on my initial binge back in March. So, with these four episodes separated by time and sobriety, they largely fell by the wayside.

To be honest, this biased me against these episodes coming into this rewatch, and I didn’t think these episodes would be much. So when I rewatched Blindspot, I was pleasantly surprised. It wasn’t exactly deep like Zima Blue, but it was entertaining, and I’ll tell you why.

Based on an original script by Vitaliy Shushko – the only other episode based on an original script was The Witness – we follow a team of five snarky cyborgs as they commence a heist on an armored convoy. On the road, we meet the leader Hawk, the big man Sui, the lancer Kali, and Rookie the, well, rookie. We also have Bob, the command center, coordinating a way back but also on the move. Everything is going according to plan until Sui swerves out of the way to avoid hitting a mouse. Because of the swerve, Sui drops his mine, alerting the onboard defenses with the detonation. Abandoning stealth, Sui and Kali make short work of the troops on board the convoy while Hawk takes care of the turrets.

Then they enter the tunnel. Hawk readies himself to steal their bounty, a valuable microchip. All of a sudden he gets blindsided and destroyed by the most dangerous defensive measure of the convoy, a giant defense bot. While Rookie looks for the microchip, Sui manages to temporarily disable the bot using a distraction. The defense bot quickly gives chase, destroying Kali in the process. Realizing they need to destroy the CPU of the bot to defeat it (aka the main CPU controlling the whole convoy), Sui sacrifices himself to destroy both the bot and the convoy. Rookie, the sole survivor of the drivers, manages to secure the microchip while lamenting their loss. Bob finally catches up to him, congratulates him on a job well done and gives him some good news. Before every mission, Bob creates memory backups of the others. So, in effect, they’re still alive in well in cyberspace.

Safe to say, I didn’t remember much of this episode after I first watched it. The only thing I fully remembered was the ending. It was because of this I didn’t think too much of this episode going in. So I was pleasantly surprised when Blindspot turned out to be fairly entertaining. It’s essentially Mad Max meets Borderlands with machines. That right there sounds entertaining at the very least.

For more specifics, right off the bat, we’re greeted with some fun animation, provided sole animator Elena Volk. It reminded me of a lot of the Borderlands series in fact, with some very distinct, stylistic character models given a colorful flair. It truly is a marvel only one person did all this. Granted, it helps this episode clocks in under 10 minutes, but still.

One of the other highlights were the cyborgs themselves. The cyborgs have a good rapport. They snark, they fight, but they each have each other’s back when the shit hits the fan. Each is distinct in both personality and design, kind of like the robots in Three Robots, but expanded into a five-man band configuration. If you’re confused by what I mean, I went over which member of the crew fits in what aspect of the five-man band in the summary. The last positive I’d like to talk about is the pacing and action. The episode uses its short runtime effectively (like Helping Hand), allowing for pure action (which was fine enough for our purposes) to carry the plot without focusing on unnecessary plot elements.

That said, there were a couple elements of the short that kept it from getting too high up on the ladder of the high-quality episodes. While the story smartly focuses on purely the heist, we aren’t given a lot of information that grounds us in the world of the short.

Like, what are their motivations? Are they working for someone? The best example of this is why the prized microchip is prized. Like, we know it’s a valuable microchip, but we aren’t given an idea what makes it so important other than they say it’s important. Like, is it just something they want to fence? Do they want to use it themselves? We don’t know.

It’s a small quibble, but with this kind of “simple job gone wrong” story, I would like to know why the target of a heist is desired, even if it’s as little as “it’s just a lot of money”. Small details like that help ground me in the world of the story, and Blindspot was missing those. If anything, it felt like this story took place in a vacuum.

My big gripe with Blindspot though was with the ending. With the reveal that the fallen cyborgs weren’t dead, it removed all sense of stakes in the story. Sure, they wouldn’t have gotten the microchip, but the fact they could reattempt the heist whenever they have new bodies assembled is also distinct. If we compare this to the heist in Solo: A Star Wars Story, it would be as if Beckett could just be revived whenever and they could reattempt the coaxium heist. I mean, it removes most of the drama involved. That said, the world of Blindspot means that this kind of fail-safe is distinctly possible in a narrative sense, so I can see people not have much of an issue with the ending. I just wish they had done something to create drama with this memory backup fail-safe present.

So in the end, Blindspot is an episode that I would compare to Sucker of Souls. Namely, it’s not a particularly deep episode, but instead just aims for well-animated sci-fi fun. Also like Sucker of Souls, a lot of your thoughts on how good the episode will depend on how one particular element sticks with you. In this case, that aspect is the ending. In the end, this is just a fun but flawed ride, and I can’t ask for too much more.