Watercooler Reviews | “Loki” Round Table: Episodes 4 and 5, “The Nexus Event” and “Journey Into Mystery”

Loki really just keeps getting better and better, Wizard of Oz parallels, alligator Variants and all.

First off, a moment to note that even if you’ve hated everything else about Loki to date, you can’t deny that by the end of episode five, Tom Hiddleston is playing a very different God of Mischief than he was at the start of episode one. The character development here has brought Loki close to, or even past, the point of human(oid) decency that led him to attack Thanos, and for this short series to accomplish what it took multiple feature films to do without compromising its writing, plot, characters or overall quality of entertainment is impressive.

We open here on a young, innocent and well-off Asgardian – Sylvie, apparently – in a past timeline, just after whatever nexus event caused the TVA to come after her in the first place. Ravonna Renslayer, the TVA boss that Owen Wilson’s Mobius has some semi-romantic, semi straight-up weird relationship with, drags her through the same processes that irritated Loki in the pilot (remember the whole “sign to verify everything you’ve ever said” dealio?), but unfortunately for her, Sylvie is just as badass as a child as she is in the present, and she escapes her captors. Well, sort of, since she’s clearly been running from them ever since. Renslayer, in the present, has apparently been privately berating herself for this moment, as she seeks advice regarding her most slippery Variant, and we get our first glance at the mysterious Time-Keepers – who have felt fake as hell from the very beginning, but laughably so in a shot that is meant to show them as menacing, all-knowing protectors of the Sacred Timeline. 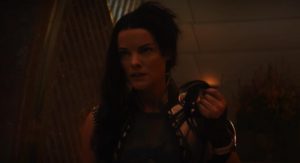 Meanwhile, Loki and Sylvie are still stuck on Lamentis-1, having resigned themselves to the fate of everyone else on the doomed moon. Slightly weird to watch two versions of the same being fall for each other – a bit narcissistic as well, no? – and apparently the Sacred Timeline thinks so too, because the moment they share before what they assume is certain death causes a nexus event in itself, and the TVA finds them. I’m honestly not sure what the Lokis would have preferred – death, or another second at the TVA, but Mobius does a pretty good job of making Hiddleston’s Loki wish he’d gone for death. Instead of a normal cell or interrogation chamber, he is subjected to a time loop in which the Lady Sif repeatedly shows up to punch him in the stomach and make it clear that he’ll always be alone. To see Loki thrown in such a way was quite amusing, though he never lost the vicious edge his wit has and that endears him so much to us. Getting desperate, Loki lands himself back enough in Mobius’s good graces for another question and answer session, where he tries to enlighten his TVA guard as to his previous status as a normal person on the Sacred Timeline. Predictably, Mobius laughs him off, but it plants enough of a seed in his mind to steal Renslayer’s TemPad and do a little investigating of his own. 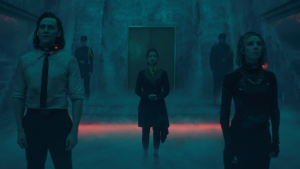 In Sylvie’s chamber, on the other hand, the opposite is happening – her assigned TVA guard, Hunter B-15, has caught a glimpse of her former life through Sylvie’s enchantment abilities, and wants no part in whatever the hell she now knows she’s been forcibly made a part of. Tl;dr, Mobius learns the truth and is pruned, Loki and Sylvie are brought before the Time-Keepers, and Hunter B-15 helps them fend off the all-knowing – who turn out to be mindless robotic dummies, leaving no clues as to who or what is actually in charge of the TVA, and why. You’re telling me Loki really escaped arrest in New York City only to end up in Oz?

About to confess his feelings to Sylvie (weird) Loki himself shares Mobius’s fate, and is pruned at the hand of Renslayer, who has survived the Asgardian blitz on the TVA and definitely knows more than she has shared with anyone so far, even baby-faced Owen Wilson. I was left curious to know if she has any idea that the lives of the pruned are not actually over, or that Loki is about to team up with even more versions of himself, including Richard E. Grant and a fashion-forward reptile… and probably Mobius (who I’m weirdly happy must still be alive out there, even though I didn’t ever really care for his character).

And here’s where the real fun begins. An after-credits scene from episode 4 introduced us to three new Loki Variants – a classic Loki, a kid Loki, and… that’s right, an alligator Loki. It seems there are more Lokis than any of us thought we would be counting out there in the Void, the wasteland at the end of time where those that are pruned are sent to live out their days. Which, it should be noted, is guarded by the terror-inducing Alioth – namely, a black cloud that does cause actual death and whom the however many Loki Variants have been hiding from in an underground bunker since they arrived in the Void in the first place.

Meanwhile, Sylvie is left at the TVA, and she’s pissed as hell. Wanting answers, she interrogates Renslayer at pruner-point, and Renslayer relents to let her in on just enough to believe she really does want the same answers, feeling betrayed by the organization she’s led for so long. The reluctant alliance does not last, however; Sylvie quickly realizes Renslayer’s allegiance to the TVA is deeper than she’d hoped, and Renslayer is still hoping to capture her, ignoring the many years between them in which she’s failed to do so. This leads to a self-prune on the part of Sylvie, and we learn that Renslayer understands even less than we think she does, believing both Loki Variants to now be dead. 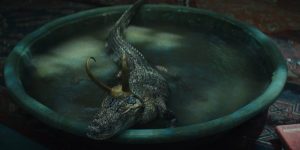 Our mischievous leads find themselves reunited with each other and Mobius in the Void, alongside more Lokis than either thought they would need to count (Alligator Loki is by far my favorite and should not be questioned), agreeing on the assumption that there must be something beyond the end of time, and that’s where the answers regarding the TVA must lie. Unfortunately, they have different strategies in mind for how to take down Alioth. Loki, of course, believes it needing to be killed, but Sylvie is not so… foolish. Enchantment is her method of choice, and together, after sacrificing one Loki and a very fast lesson in magic for another (I think Marvel was thinking we’d all ignore the reasoning that Loki would know how to enchant just because Sylvie does, and I guess I’m willing to roll with it, although – I still see you), the cloud parts, and they’re off to see the Wizard.

Some of the best moments of this show are performed by the actors playing the TVA members – Mobius, Hunter B-15 and Hunter C-20 specifically, played in that order by Owen Wilson, Wunmi Mosaku and Sasha Bianca Lane. Mobius’s “death” was surprisingly touching, and I was honestly emotional as he questioned Renslayer, “You want to know where I’d go, if I could go anywhere? Wherever it is I’m really from.” I don’t know where they’ll fit in to the MCU going forward, though I suspect the Loki finale will answer that to some extent, but I certainly hope they don’t simply disappear. Those who aren’t already dead, anyway.

The Wizard of Oz parallels are really getting to me here, because it isn’t the first time we’ve heard them. Way back in the day of 2012, when half of us (me) were waiting in line at midnight to see The Avengers on the big screen, Nick Fury referred to Loki’s use of the Tesseract to mind-control Clint Barton and Erik Selvig as turning “two of the smartest men I know into his personal flying monkeys.” Naturally, this description led to one of the most meme’d moments of the movie, as Cap “understood that reference” for the first time since becoming un-frozen.

That’s one hell of a full circle, Marvel, if that’s indeed what’s going on here. I wouldn’t be surprised, since, remember, Loki entered this whole TVA adventure after losing the battle of New York in the first place.

As I mentioned at the start of this review, I’m impressed with the ability of Loki to catch its main character up to his counterpart, murdered by Thanos, without compromising itself or feeling a cheap way to warrant the return to the MCU of one of its favorite fallen characters. Interestingly, though, the heart of this series is the bond between Loki and Sylvie. While strange, considering how literally nobody I know would ever want to date themselves (there’s far too much self-hatred to go around for that), Loki’s character development is probably owed nearly in full to that relationship – to the ability to truly look at himself and discuss his deepest fears, insecurities, talents, histories. His now-friendship with Mobius, also, should not be discounted. For the first time, we are watching Loki develop bonds with those new to him (I’m not counting Thor here, as that was a bond that already existed), and seeing an enormously new depth brought to the character by Hiddleston. I’m all for it, and I can’t wait to see how things are tied up in the finale.